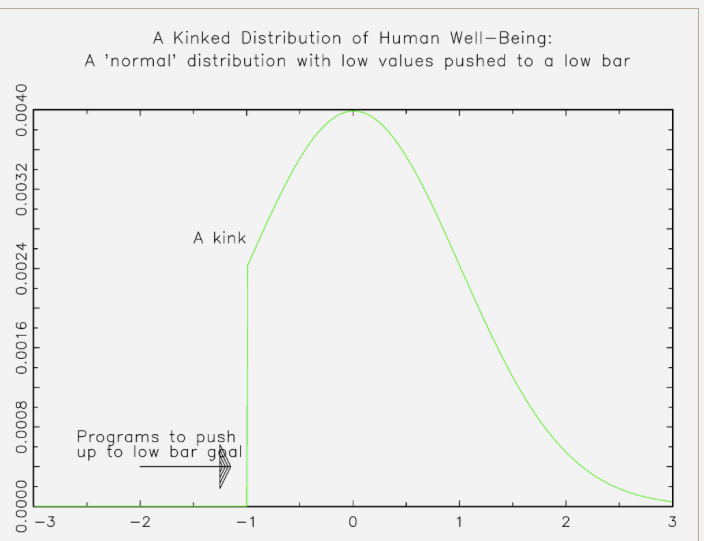 The frantic work behind establishing new global development goals for a post-2015 development framework is now at full steam. There is some reason to think that this exercise is all a big waste of time—it simply represents a wish-list for single issue interest groups for how the world should be in a further 15 years time without establishing any allocation of responsibilities for meeting those targets, mechanisms for achieving them, or accountability for upholding those pledges. Something in the ballpark of 17 goals and 169 targets that won’t be met.

But insofar as global development goals are useful and important in shaping development practice, it is necessary to get the structure of the goals right. In this post, I will focus on whether sufficiency thresholds should be used to evaluate development progress.

Lant Pritchett and Charles Kenny have recently argued that development practice mistakenly aims to be “kinky” (not that kind of kinky). It aims to raise up people at the bottom of distributional curves to below a minimum threshold, to the exclusion of the interests and aspirations of those elsewhere in the distribution.

In the paradigmatic case, the International Poverty Line maintained by the World Bank counts a person as poor if they live on less than $1.25 per day 2005 PPP. (There are many problems [pdf] inherent in the purchasing power conversions, but that is not our focus here). People living on incomes/consumption above this threshold are not relevant for determining whether target 1 of MDG 1 (the poverty eradication goal) has been achieved.

Philosophers call threshold goals “sufficientarian”. Sufficiency goals aim to get people above a minimal level of achievement. Above this level of sufficiency, welfare gains are treated with reduced (or non-existent) moral and political concern. Individuals living on $1.80 or $2.40 or $3.60 per day are still poor by most standard conceptions, and their aspirations are still relevant for national development planning. It is therefore mistaken, in Pritchett and Kenny’s view, to focus development practice narrowly on an excessively low threshold for poverty eradication, excluding the interests and aspirations of the rest of society.

While I agree that the International Poverty Line is deeply flawed, it may be that sufficiency goals should remain the sole targets in the Sustainable Development Goals or other related frameworks. One way to defend sufficiency goals is to note that the best way to achieve a sufficiency goal may not be to bend a kink in the distributional curve, but to shift the entire distribution to the right. That is, pro-poor policy need not exclusively focus on establishing social protection schemes that elevate the welfare of the worst off. Instead, pro-poor policy can focus on broader reforms that improve everyone’s well-being, and in so doing meet the target or raise everyone above sufficiency. In other words, you can redistribute your way to poverty reduction, or grow your way to poverty reduction. Both are consistent with sufficiency goals.

A second way to defend sufficiency goals is to note that shortfalls in meeting basic needs or securing basic rights are properly matters of international concern, while promoting the general welfare of all citizens is not. Foreign aid programs are justified to the taxpayers and donors who provide them (at least partially) on the grounds that these dollars will combat severe deprivation. They are not justified on the grounds that they will merely support the general national interest of self-determining grounds.

A third way to defend sufficiency goals is to note that they function somewhat like what philosophers call prioritarian goals. That is, they direct attention to the worst off group in society, and in so doing correctly focus on the most morally pressing priorities. (Of course, true priority goals might have a different structure. They could, for example, focus on raising incomes or life expectancy or caloric intake for the worst off 20%, or 40%.) In this way, sufficiency goals guard against the tendency for development policy and resources to be directed towards (or captured by) better off groups who are able to benefit from gains afforded by international development cooperation.

None of this is to dispute Pritchett and Kenny’s claim that existing global poverty lines and other development metrics are deeply flawed. It is simply to note that global development goals that aim at a morally plausible sufficiency line might be defensible even if the current global targets are not. While more aspirational development ideals may have some role to play in international norm setting, any attention or resources focused on these ideals might draw from the struggle to secure basic rights for the worst off.