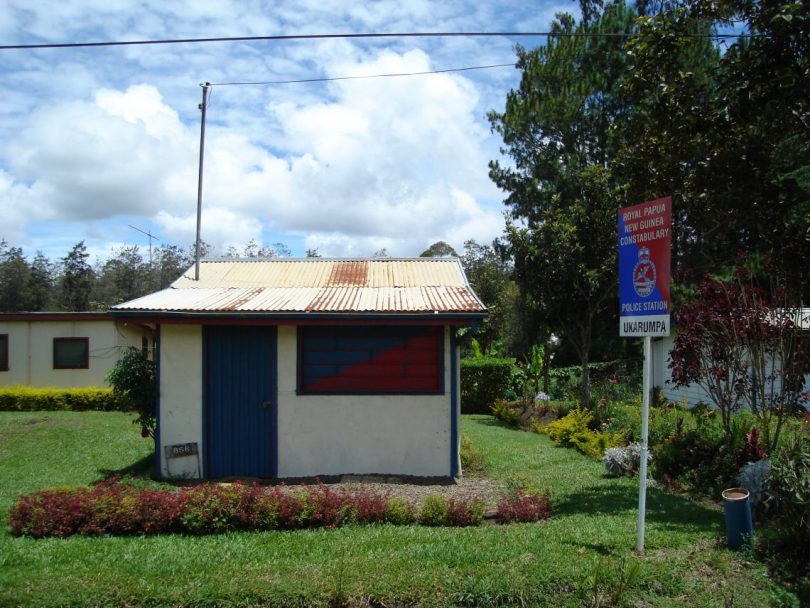 The final results of The National’s online poll on the question “should the government impose the death penalty on cop killers in PNG” were published on 3 February 2020. A total of 565 (68%) respondents voted yes and 262 (32%) voted no. The online poll started after the killing of a police officer in the line of duty in Enga Province on 26 January 2020. The killing was widely condemned by political leaders including Prime Minister James Marape and senior members of the Royal Papua New Guinea Constabulary (RPNGC). Consequently, the killing immediately prompted PNG’s acting Police Commissioner to propose that the death penalty be imposed on cop killers in PNG through legislative reform.

This blog looks into the number of police killed in PNG, and asks whether the death penalty is the right measure for “cop killers” in PNG.

According to RPNGC Police Legacy, 111 police were killed between 1945 and 2016. Using data from The National’s and Post Courier’s online archives I ascertained estimates for the number killed between 2017 and 2020. Figure 1 presents the yearly figures of officers killed in the line of duty between 2000 and 2020, a total of 45 officers. 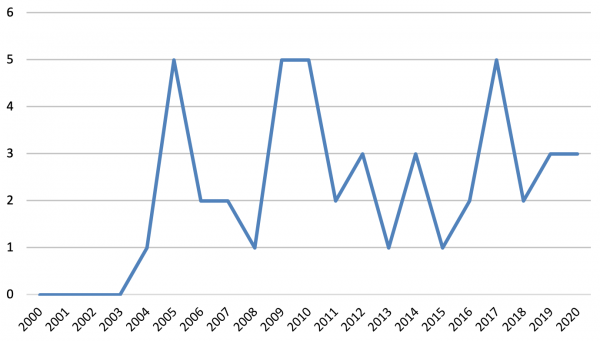 The highest number killed in a single year was five: in 2005, 2009, 2010, and 2017. The lowest was zero: from 2000 to 2003. 2017 was an election year, but the other election years did not have a high level of police killings. It was also reported by The Guardian, based on analysis by the Australian National University and Transparency International PNG, that 2017 was the worst election year in terms of killings and violence and fraudulent practices. Four of the five police killed in 2017 were victims of election-related violence and disputes in the Highlands region.

In general, the issue is the use of illegal or unlicensed firearms. A report by the United Nations Office on Drugs and Crimes (UNODC) in 2016 indicated that the level of armed violence in PNG is one of the highest worldwide. The highlands is the leading region when it comes to the use of firearms among warring tribal groups. A survey by the World Bank also indicated that PNG has a consistently high crime rate involving assaults, armed robbery and gun violence among individuals and tribal and armed groups. Even assaults between disciplinary forces such as police and defence at times lead to deaths and injuries. (Further data on crime in PNG can be found here.)

Killing a police officer in the line of duty is a homicide. According to Prime Minister James Marape, it is a crime of the highest order. When responding to the acting Police Commissioner’s suggestion to impose the death penalty on cop killers, Mr Marape stated that the law is already in place in the Criminal Code, and that it will be thoroughly looked into between the police and justice ministries. Mr Marape’s response has raised the question of whether the death penalty is worth considering for cop killers in PNG.

Does it make sense to use the death penalty on cop killers in PNG? My answer is that it does not.

In 2014, PNG’s Constitutional Law Reform Commission (CLRC) toured several countries in Asia and the United States to observe and provide advice to the government on the appropriate methods of execution. The tour mission had cost US$600,000 (K2 million) of taxpayers’ money. According to Justice Minister and Attorney General Davis Steven, the finalised report on the methods of execution and its implementation was submitted but rejected seven times by the National Executive Council (NEC).

There are many reasons that the death penalty has not been acted on in PNG. One is that carrying out an execution could result in escalating violence and crimes and even deaths because of PNG’s “payback” mentality entrenched in its cultural systems. In response to the suggestion of imposing the death penalty on cop killers in PNG, a representative of PNG Women for Change, an NGO based in Enga, stated that the police chief was only seeing one side of the coin.

Finally, even if the execution is not carried out, the imposition of the death penalty for cop killers may be seen by some as a deterrent to crime. However, according to a review by Joshua Sinai, there are two reasons why criminals kill cops: “to escape apprehension and to avoid the consequences of their criminal acts.” Given their acts in these cases may not be premeditated, the threat of capital punishment may not act as a deterrent.

Overall, it would seem that the death penalty may not be the right response to the problem of lethal violence against police in PNG. Policemen and women are the representatives of the state. They help keep the community and society safe and secure when on duty. A discussion paper by Grant Walton and Caryn Peiffer in 2015 indicated that the ratio of police to population in PNG is 1:1404, which is well below the United Nation’s recommended ratio of 1:450. Because of the lack of capacity, the safety and security of police officers are at risk, especially when being deployed in the most intense crime zones. While introducing the death penalty will not achieve the desired effects, the government and RPNGC do need to do more to keep the police safe.