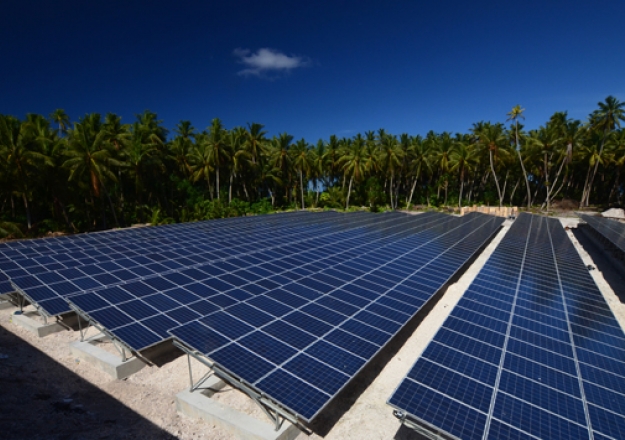 Over the past six years the New Zealand Aid Programme has made renewable energy a key focus of its work. Renewable energy is described in the aid program’s Strategic Plan 2012-2015 as an ‘enabler of growth’, assisting the program to deliver on its objective of promoting sustainable economic development. The aid program’s focus for renewable energy has clearly been in Pacific island countries – something that is not surprising, given the geographical emphasis of the broader aid program. However, there have been projects in other parts of the world, including in Indonesia, Afghanistan, Comoros and the Caribbean.

Kick-starting New Zealand’s expansion into this area was the 2013 Pacific Energy Summit, co-hosted by the European Union and the New Zealand Aid Programme. New Zealand committed NZ$65 million over three years for more than 18 projects in seven Pacific countries: the Cook Islands, Tuvalu, Kiribati, Samoa, Papua New Guinea, Tonga and Vanuatu. By August 2014 plans were in place to spend $15 million more on 25 Pacific renewable energy projects, such as working with the European Union to establish solar panel systems on the outer islands of both Tuvalu and the Cook Islands.

The use of New Zealand’s expertise fits with the government’s aim of aligning New Zealand’s aid work with broader commercial and political foreign policy goals. New Zealand companies offer the requisite technical capability to undertake work in this area (although whether this is the case in far flung areas in Afghanistan, where NZ companies are also delivering aid projects, is debatable). Focusing on an area in which New Zealand does well is also consistent with broader arguments for greater specialisation and less fragmentation among donors (these arguments, it should be noted, have not gone unquestioned).

However, there are also risks that need to be managed when aligning aid objectives with broader foreign policy goals. An obvious one is that the focus on poverty alleviation can suffer as a result of commercial objectives. This in turn creates reputational risk: something that was evident historically in Australia when the aid program was tied (the term ‘boomerang aid’ has never been completely shed, even if it is no longer very accurate). Aid driven by donor commercial interests can also decrease aid’s efficiency and effectiveness.

It is clear that much of the work in the Pacific has supported New Zealand energy companies. Meridian Energy managed the contract for the Tongan solar grid. PowerSmart won an award for its Tokelau solar system, and is about to undertake more work for the aid program. Other New Zealand companies that have gained contracts include Geothermal NZ, Becca NZ and Reid Technology. These are reputable companies and most are on one of the aid program’s supplier panels. To the best of our knowledge these projects have been subject to open tender, i.e. this does not appear to be tied aid. Indeed, some Australian companies have also been awarded contracts in recent years.

But the lack of engagement with Pacific island companies is a concern. In large part this is no doubt the result of the limited pool of companies in Pacific island countries that are capable of establishing these projects in a cost effective manner. In that case, the question is whether there is greater scope for the involvement of local companies, and how this can be achieved through the New Zealand Aid Programme (especially in larger countries where a market can be developed). The sustainability of installed renewable energy systems is likely to benefit from such local participation, given the need for readily available and cost-effective maintenance.

The first objective, focused on reducing reliance on imported fuels, primarily involves grid-based renewable energy investments of the type installed by Meridian Energy in Tonga. These systems replace diesel-fired power generation for the electricity grid. They can benefit households that are already connected to the electricity network by lowering electricity prices (although this is not always the case if prices have previously been below cost). They do not benefit households in rural areas which have no electricity supply.

The second objective, focused on access to modern energy services, primarily involves providing electricity to households in rural communities (or outer islands) that do not have an electricity supply. This assistance has very limited impact on the volume of fuel that is imported.

Assuming that the aid dollar for renewable energy activities is fixed, more investment in power generation for the existing electricity network means less investment in rural electrification, and vice versa. So there is a potential trade-off between objectives. To date, New Zealand has funded both types of activities. But it is unclear whether or how the balance between these priorities has been established. Indeed, whether the potential trade-off is recognised at all – at least officially – is also unclear.

In our view, greater weight should be given to rural electrification, given the large numbers of un-electrified rural households in the region. Approximately 70 per cent of Pacific island households remain without an electricity supply, and these households are likely on average to be poorer than those that are connected to the electricity network. If this emphasis went on rural electrification, it would presumably entail a geographical re-direction of aid activities, given that un-electrified households in the Pacific are concentrated in Melanesia.

This emphasis would also require greater flexibility from the New Zealand Aid Programme. Access to electricity can be expanded using a range of technologies. In many cases in the Pacific, solar photovoltaic technology will be most appropriate. But in some cases it will be more cost effective to use diesel generation, or a hybrid system, to achieve the same result. Best practice in rural electrification dictates that technology choice be based on the requirements of households, not the supply-side constraints of the donor agency. This raises the question of whether a renewable energy focus best serves the objective of improving access to modern energy services, or whether a broader mandate would be preferable.

Overall, New Zealand is to be commended for its work in Pacific renewable energies. Yet there remain important questions for it to address. We look forward to what the upcoming evaluation of New Zealand’s infrastructure investments in the Pacific has to say when completed in 2015.

Matthew Dornan is a Research Fellow at the Development Policy Centre. Joanna Spratt is a PhD candidate at the Crawford School of Public Policy. She is also a consultant and coordinator of NZ Aid and Development Dialogues (NZADDs).