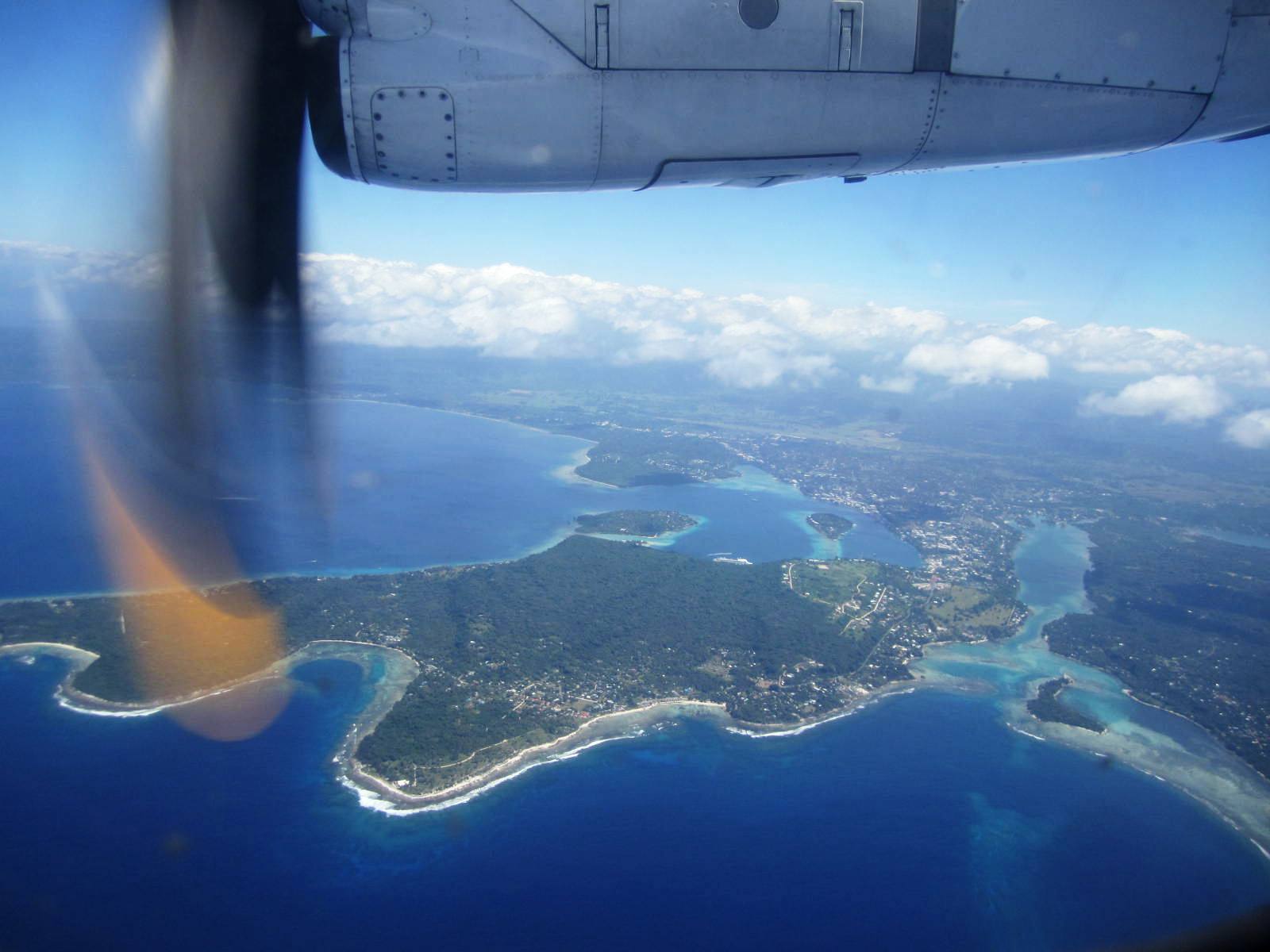 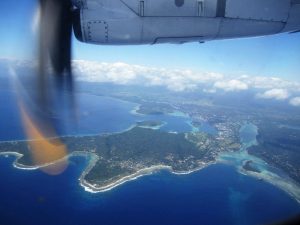 The last decade has witnessed a large increase in temporary labour migration opportunities available to Pacific islanders through managed mobility schemes for seasonal employment in Australia and New Zealand’s agricultural sectors. Far from being an isolated attempt to regulate regional labour flows, this has been part and parcel of a global shift towards a migration policy agenda prioritising temporary over permanent admission channels. But is temporary migration what Pacific islanders really want? And is a system that is increasingly focussed on category-specific selection criteria providing equitable opportunities for Pacific women and men? We initiate a reflection on these questions looking at recent New Zealand immigration data.

Migration governance in the South Pacific and the “triple-win” mantra

Since the 1990s a growing body of evidence showing a positive impact of migration on poverty reduction in migrant-sending countries has fuelled a surge of interest amongst policy-makers in the development potential of labour mobility.

Several high-level platforms established under the aegis of the United Nations have advocated for the integration of “managed migration” strategies into the international development agenda. At the national level, both countries of origin and countries of destination have embraced this perspective, attracted by the lure of economic gains from labour mobility and private remittances. This has been accompanied by a revival of temporary labour migration programs — increasingly referred to as “triple win” strategies, whereby migrants, the sending and the receiving countries all allegedly benefit — and a growing emphasis on the selective management of skilled migration as a tool for matching labour demand and supply, and by boosting the economic competitiveness of host countries.

The South Pacific region is no exception. On the one hand, the primary feature of immigration policies in Pacific Rim countries such as Australia and New Zealand is a focus on skilled admissions. On the other, and as far as Pacific island countries are concerned, dominant migration policy narratives revolve around schemes for seasonal agricultural work and their possible extension to other sectors of employment. New Zealand’s Recognised Seasonal Employers (RSE) Scheme has been regarded by many as a best practice.

Yet migration policies are not neutral and equitable frameworks, as they differently inform, guide and constrain migration decision-making of individuals and families. Based on attributes such as nationality, age, education titles, knowledge of language, and income, migration policies regulate and restrict access to employment, the possibility of bringing family members, and the transition to full citizenship rights. For example, with reference to the impact of RSE’s regulatory framework, research has emphasised that the lock-in nature of the program, lack of career opportunities, and restrictions of welfare and family rights make RSE workers highly vulnerable. However, a systematic review of the impact of migration policies on Pacific islanders’ migration experiences is still lacking.

The “temporarisation” of Pacific migration flows

As exemplified in Figure 1, with reference to New Zealand’s immigration data, the advent of the RSE scheme has gone hand-in-hand with a generalised shift in Pacific migrant admissions from settlement-oriented to temporary channels. As a matter of fact, the chart shows not only a dramatic increase in temporary labour migration, and a less marked growth in other temporary categories such as student migration, but also an absolute decline in family reunions and other admission streams with a pathway to residence. The decrease in family reunification can be ascribed, at least in part, to the introduction in 2012 of more restrictive requirements for sponsoring family visas. 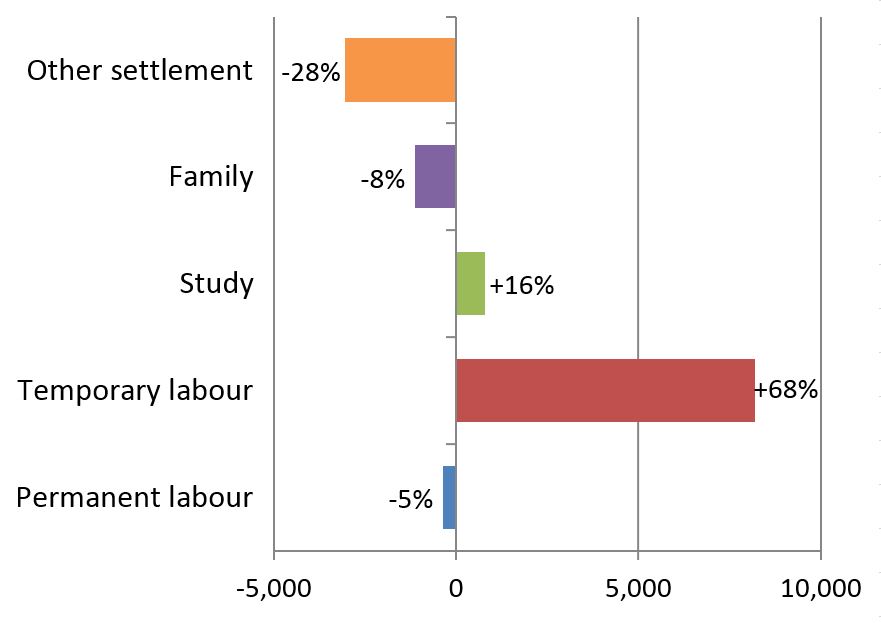 From the standpoint of Pacific migrants, the increase in the number of temporary admissions in New Zealand has not resulted in a decreasing interest in permanent migration opportunities. Rather, the opposite seems to have happened. Figure 2 attempts to capture this by displaying the trends in the approval rate for the two main components of the ballot system – the Pacific Access category and the Samoan quota – which every year grant permanent residence rights to a capped number of new migrants and their dependents. While the quotas have not changed since 2010/11, the percentage of approved applications has halved for all countries – except for Kiribati, where it has been consistently below four per cent. For Fiji, which was re-included in the ballot system in 2015 with an annual quota of 250, over 22,000 applications were submitted in the first year, resulting in an approval rate of only 1.3 per cent. The systematic over-subscription of special migration quotas for Pacific islanders suggests that the demand for settlement-oriented migration opportunities has increased concomitantly with, and in spite of, the significant expansion of temporary labour mobility. 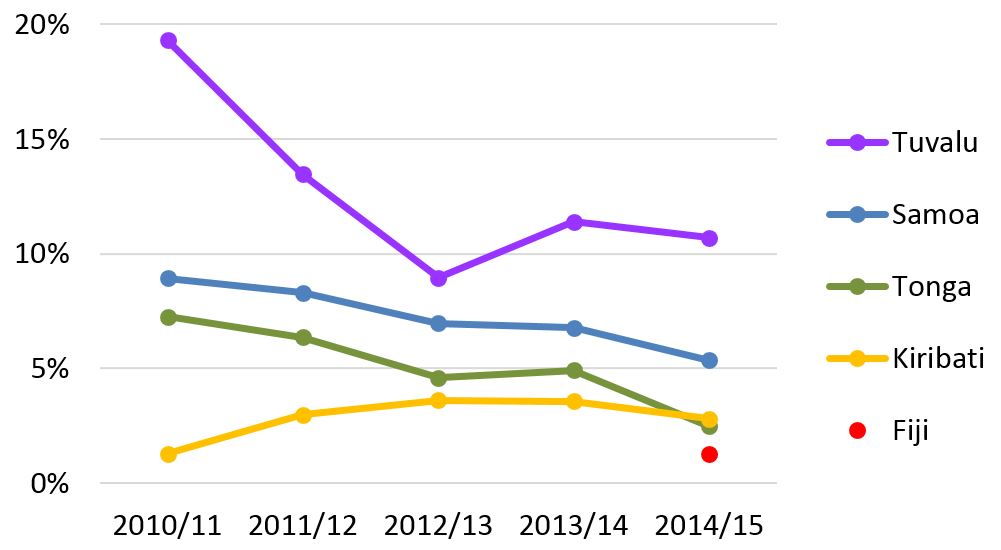 Another critical question is whether opportunities for mobility under the current frameworks for migration governance in the region provide equitable access for all Pacific islanders.

A previous post on this blog revealed the very low share of Pacific women in seasonal employment and possible reasons for their under-representation. Yet it is less known that the percentage of Pacific women admitted to New Zealand through highly skilled labour migration channels (Essential Skill visas, Graduate Job Search visas and a range of numerically small visa categories for business or employment in specific sectors) is also low, i.e., 28 per cent in the period 2010-15 (Figure 3).

Interestingly, the chart below shows that while other entry categories such as the ballot system, study and family reunification are roughly gender balanced, there is a large over-representation of women in visas allocated to Pacific migrants under Section 61. This provision allows migrants who are unlawfully residing in New Zealand to apply for a visa. The granting of visas under this section of the 2009 Immigration Act is “a matter of absolute discretion”.

Further analysis is needed of the reasons for the gender imbalance in this category, and how this is reflected in the migration and employment experiences of the ‘hidden’ Pacific migrant workforce entering New Zealand’s labour market through channels other than dedicated labour migration streams.

Figure 3: Female share of Pacific migrants in New Zealand by category of admission, 2010-15 (%) 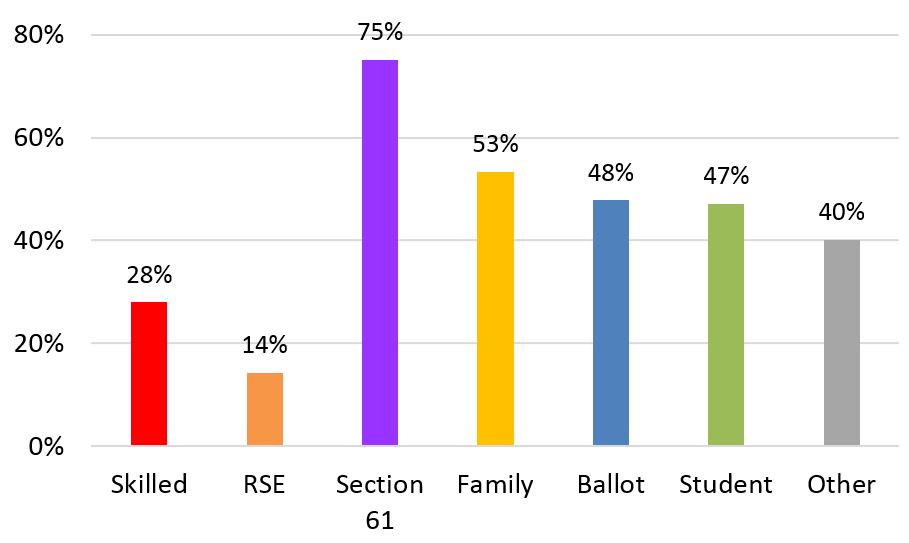 Migration policy debates are often underpinned by the implicit assumption that the management of temporary and permanent migration channels is a zero-sum game. Yet temporary migration is not a substitute for more stable and inclusive migration opportunities for Pacific islanders that carry unrestricted rights to work, settle, have a family life or, potentially, pursue circulatory migratory patterns that are self-initiated and shaped by opportunities rather than by superimposed, rigid regulatory structures. This points to the need to broaden labour migration debates in the Pacific beyond the narrow focus on temporary/seasonal mobility. Further data that we are currently analysing for a research project at The University of the South Pacific, and plan to blog about soon, also show that inequality is a pervasive consequence of the frameworks for migration governance in the region.

Alessio Cangiano is a Senior Lecturer and Coordinator of the Population and Demography Program at the School of Economics, The University of the South Pacific. Andreea R. Torre is a Lecturer with the Development Studies Program, School of Government, Development and International Affairs, The University of the South Pacific. The authors would like to thank David Abbott for his assistance with data tabulation.

Alessio Cangiano is a Senior Lecturer and Coordinator of the Population and Demography Program at the School of Economics, The University of the South Pacific.

Andreea R. Torre is a Lecturer with the Development Studies Program in the School of Government, Development and International Affairs at The University of the South Pacific.