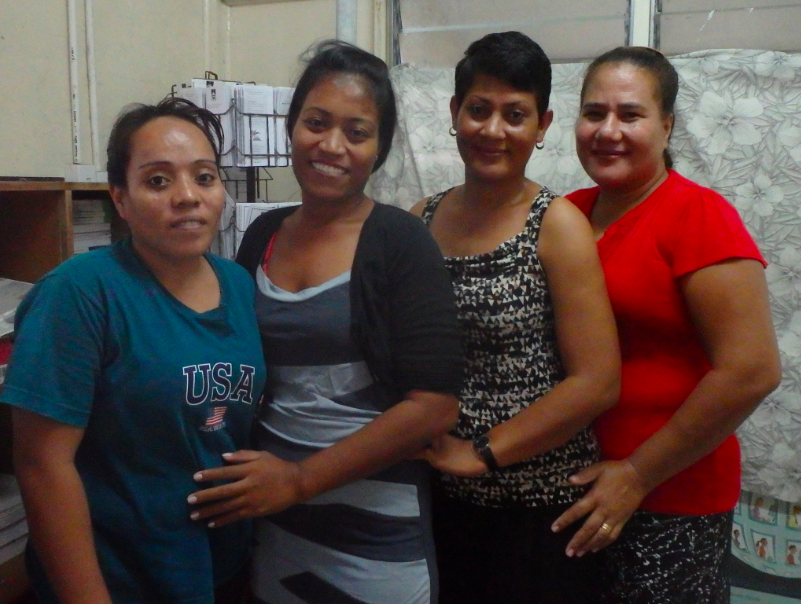 The International Labour Organization (ILO) estimates that over 50% of the 232 million international migrants today are economically active, and almost half of these migrants are women. Increasingly, female workers are migrating for employment of their own account, rather than for family reunification, and in search of decent work and livelihoods in destination countries. However, while the trend of increasing female migration remains strong in Asia, labour mobility for women in the Pacific is still limited. What does this really mean for Pacific Island women?

A recent report [pdf] by the ADB Institute, OECD and the ILO, showcased the prominent proportion of female migrants as a total share of workers in Asia. Though decreasing as a share of total migrants from 46% to 42%, the number of migrant women still went up by 6 million during the period 2000 to 2013 (from 23 to 29 million). The feminization of migration was particularly observed in some parts of Asia including East Asia, where the share of women among migrants now reaches 54%.

In contrast to the large number of Asian female migrants, opportunities for labour migration available to women in the Pacific are much more limited. Although figures on labour migration from Pacific Island countries are slim, two key sectors for temporary labour migration present telling examples: seasonal worker programs to Australia and New Zealand, and the seafaring sector (which is particularly important to the small countries of Kiribati and Tuvalu).

Amongst the seasonal worker programs, women currently comprise just 14% of the workers participating. There were six times as many men as women recruited during the year 2012/13, with some countries sending just 3% of female workers. In the seafaring sector, which employs the vast proportion of international labour migrants from Tuvalu and Kiribati, there are almost no female migrants, though in the past (as discussed below) there were relatively large numbers of female cleaners and bartenders engaged on cruiseliners. Much of the gender imbalance is due to the employer preference within the sectors themselves – with farmers valuing workers’ strength to undertake fruit picking, and shipping companies preferring male sailors for cargo ships due to the risk of psychological issues for a small number of female crew members. Combined with this is the issue that there has been less policy focus in Pacific Island countries themselves on exploring opportunities in female-dominant sectors.

Job opportunities should first of all be created where people are and migration should be a matter of choice. So does it matter that women in the Pacific have fewer opportunities than men to participate in temporary labour migration? For starters, it bears reminding that unemployment is a serious problem for many Pacific Island countries, particularly for young women. For example, in Kiribati, the unemployment rate for young women is 61%, much higher than it is for young men (47%) and domestic labour opportunities are few. Furthermore, it has now been extensively documented that temporary labour migration, particularly the seasonal worker programs to Australia and New Zealand, hold a number of important benefits for migrants and their communities, enabling workers to send remittances to their families, and return home with skills and knowledge that can help them reintegrate into the labour market. Whilst remittances have often been examined, few of the studies on the development impacts of labour migration have focused on the social impacts on migrants, particularly important for female migrants.

Amongst the women engaged as seasonal workers in New Zealand and Australia are Kila and Celestine, two female PNG workers, who shared with me their experiences of working abroad. Hailing from the Central Province of PNG, Celestine was living in a small town and making a living selling betel nut to support her mentally disabled brother and her elderly father. ‘I first applied in 2011’ says Celestine, ‘but I was not selected. It took one year of waiting. When they [the Seasonal Worker Coordination Office] rang me to say that I was selected and asked me to come in for training, I was so excited that I would make money to support my family.’ After two seasons in Queensland, Celestine has used the money to fix her family’s home and is working to start a business selling rice. Kila, from a neighbouring village in the Central Province, also spoke passionately about the benefits of her seasonal work in New Zealand, which allowed her to save money for the start-up capital to open a small shop, and also a chance to be independent and do something ‘for herself’.

I heard similar stories when speaking with i-Kiribati women who had worked aboard commercial cruise liners between 2004 and 2012. Agnes, Tepikines, Tiera and Teita (pictured above) worked for varying periods on a Norwegian cruise liner which sailed from Miami. Not only did this work give them the opportunity to earn up to USD 15,000 per year (10 times the average GDP per capita in Kiribati) but they also were able to experience life outside Kiribati and find independence. Being away from home meant freedom from the expectation of parents and relatives – and an opportunity to expand their horizons. ‘The best experience for me’, says Tepikines ‘was seeing the mountains in Alaska’. Given that the highest point on her island of Tarawa (the capital) is just 3m, one can only try to imagine what an extraordinary sight it would have been.

Although Kila and Celestine continue to participate in seasonal worker programs – indeed I met them on the cusp of their departure to PNG (the third time for Celestine and the second time for Kila) – the opportunity no longer exists for the i-Kiribati female workers I met as the company no longer recruits i-Kiribati workers due to the remoteness of the small island country. Since NCL’s departure from Kiribati, there have been no women recruited in the seafaring industry in either Kiribati nor neighbouring Tuvalu.

Of course, temporary labour migration opportunities for women do not always have positive development impacts. As noted in the ADBI, OECD and ILO study referred to above, a recurring issue concerning female migrants in Asia is that they are often employed in sectors that are not always adequately covered by the legal framework in destination countries, or are in workplaces that are difficult to inspect. For example, 88% of female migrant workers from Sri Lanka are employed as housemaids, which can put them in a vulnerable position with respect to their working conditions or the payment of wages. However, with an effort to promote gender-sensitive labour migration policies and institutional frameworks, guided by ILO Conventions such as the Domestic Workers Convention, the protection of female migrants can be prioritized in policy-making and lead to real change.

Through the EU-funded project on ‘Pacific Climate Change and Mobility’ the ILO is working with the UN Economic and Social Commission for Asia and the Pacific (ESCAP), and the UNDP, to improve labour migration policies and outcomes for women and men in Pacific Island countries. In particular, the ILO will be working with governments, employer and worker representatives in Kiribati, Tuvalu and Nauru (as the countries most vulnerable to the impacts of climate change on livelihoods and domestic labour opportunities) to improve international labour migration outcomes, particularly through temporary labour migration schemes. Part of this work will include improving temporary labour migration opportunities for women, including through a renewed focus on labour sectors where women are more likely to be recruited. These will of course vary from country to country depending on specific labour shortages. For example, as noted in a recent report by the Centre for Global Development, the US Bureau of Labour Statistics forecasts that there will be a shortage of home health-care aides, nurses’ aides, personal-care aides and child-care providers in the realm of 1.9 million – larger than the total increase in the 25–54 labour force of 1.7 million. Whilst other developed countries such as Australia are also likely to experience shortages in these ‘low skilled’ jobs in the care industry, the current shortage lists for Australia only cover skilled professions in this industry – such as nursing.

Although temporary labour migration experiences of Asian women have often been far from perfect, continuing efforts by labour ministries, social partners and the ILO are helping to minimize harmful practices and promote development impact for women migrants and their families. Pacific Island women could equally benefit from temporary migration – if more emphasis is put on expanding labour migration in the sectors with most relevance to female Pacific workers, and mechanisms are in place to make sure that their rights are protected.

Sophia Kagan is a Labour Migration Technical Officer for the Pacific Climate Change and Mobility Project with the International Labour Office for Pacific Island Countries. Further information on labour migration in the Pacific can be found at the PCCM Facebook Group, and the ILO Suva Labour Migration website. Sophia can be contacted at kagan@ilo.org for further information on the ILO’s work on labour migration in the Pacific.

Sophia Kagan is a Labour Migration Technical Officer for the Pacific Climate Change and Mobility Project, with the International Labour Office for Pacific Island Countries.