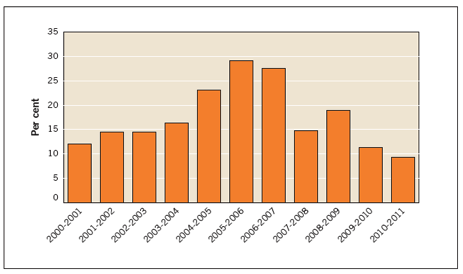 In 2003, Australian aid was in a state of flux. The Pacific seemed to be collapsing. Aid wasn’t working. Something new needed to be done. The solution was WoG, or “Whole of Government”. Private advisers were ineffective. Government officials would come in and fix things up. By 2005-06, the share of the aid budget allocated to departments other than the official aid agency, AusAID, has risen dramatically to 30%.

Today, those heady days seem a long time gone, as the graph below shows. The Regional Assistance Mission to the Solomon Islands (RAMSI) continues, but is being downsized. The other whole-of-government flagship, the PNG Enhanced Cooperation Program is a shadow of its former self. In 2010-11 departments other than AusAID spent less than 10% of the aid budget. Whole-of-government has been downgraded from the instrument of choice into a useful arrow in the aid quiver.

On Friday January 22nd, Foreign Affairs Minister Kevin Rudd released a new report, the APS (Australian Public Service) Adviser Review, or, in full the “Review of terms and conditions for Australian Government officials deployed as advisers under the Australian Aid Program”, completed in September last year. It follows a 2010 review of private sector consultant salaries, which in turn followed some high publicity cases of high-paid private aid-funded advisers. What these media stories never picked up on was that, no matter how much the private-sector consultants were paid, Australian government advisers were, on average, being paid more (as long acknowledged, for example, here).

It is to the Minister’s and AusAID’s credit that they took the lead in reviewing Australian government adviser remuneration, which earlier had been a matter left to each sending department. The report just out certainly reveals some very generous perks. Four in particular that stuck out to me were:

The APS Review eliminates the last three of these perks, or at least recommends their elimination (I return to this distinction later.) Travel entitlements for SGP advisers in PNG are reduced from once every two months to three times in two years, still three times as generous compared to what most AusAID staff obtain (once in every two years).

There will always be those who complain that tightening conditions will make it harder for departments to attract the staff needed to work overseas.  But conditions of overseas service are still very generous due to their tax free status, and a line has to be drawn somewhere. In my experience, many of those who work overseas really enjoy it, and are quick to queue for a second go.

While the APS Review is therefore a highly commendable step forward, three limitations also need to be recognized.

First, the review only covers a minority of APS advisers. Importantly, it does not cover staff serving with the Australian Federal Police, which is the source of many more overseas aid-funded advisers than any other department. According to its website, the AFP International Deployment Group has 450 staff deployed overseas. By contrast, according to the Aid Review there are only some 64 non-AFP public servants working as aid-funded advisers.

The review says this is because the AFP is covered by the Federal Police Act of 1979. But this sounds like a fig leaf. The AFP now has a monopoly on the provision of policing assistance through the Australian aid program. It should not be allowed to charge whatever price it likes. After all, the APS Review does not go to the issue of base salaries – the pay provided by sending departments to their domestic staff – but rather addresses only those perks (provided in addition to base salaries) associated with aid-funded, overseas positions. At a minimum, one would expect the AFP to be transparent and to set out the terms and conditions for its overseas advisers in the same way that AusAID and other government departments have now done in Attachment C of the APS review.

Second, there is only the briefest mention in the APS Review of that biggest perk of all: the tax-free status of adviser salaries. DFAT and AusAID staff typically continue to pay tax while they serve overseas. Why other government public servants shouldn’t (or shouldn’t be paid net-of-tax salaries) is not clear.  Private-sector advisers also receive tax-free salaries, but have to compete for contracts, and now face salary regulation following the 2010 adviser review. I used to work for the World Bank, which also offered tax-free salaries, but at least the benchmarking of Bank salaries was against the net-of-tax salaries of tax-paying comparators.

This last point goes to the issue of the status of AusAID. Recently, AusAID was upgraded to an “Executive Agency,” one of only six. But Executive Agencies are normally very small outfits (the National Archives, and Old Parliament House are two of the other five). AusAID, by comparison, is one of the government’s biggest spending agencies. Why not make it a department, so that it is equivalent in status to the departments it is trying to pull into line? Making AusAID a department would enhance its status and authority, help give it the clout it needs to set the basic parameters for engagement by all departments and agencies in the aid program, and perhaps help eliminate in the future the sort of ambiguity evident in the status of the APS Adviser Review recommendations.