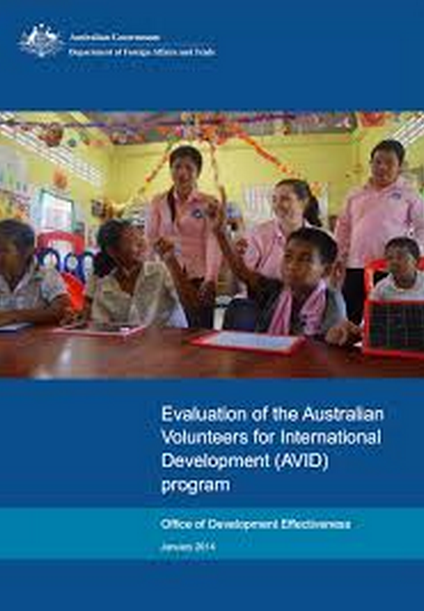 At Devpolicy, we have considerable interest in the volunteer program. One of us used to be a volunteer. I learnt from the recently-released Office of Development Effectiveness (ODE) Evaluation of the Australian Volunteers for International Development (AVID) program that my colleague Ashlee Betteridge was one of the 15% of returned volunteers not satisfied with her assignment. She was one of the 30% not satisfied with the support received from her in-country manager, one of the 44% whose job was not as per the position description, and one of the quarter whose volunteer assignments had been shortened. In short, she was in a minority of less-than-happy volunteers, but not a small minority.

This is perhaps why the blog she wrote last year on her experience with the volunteer program went viral, at least by our standards. There has been so little frank public discussion on the volunteer program and there is clearly untapped demand for it. Unfortunately, the new evaluation, commissioned by ODE and conducted by ARTD Consultants, didn’t deem it necessary to reference Ashlee’s blog and the discussion it generated. As I’ll show, this was a lost opportunity.

We also have an interest in the volunteer program because we have recently become a partner organisation. We are trying to help the UPNG Economics Department get a volunteer lecturer.

So we certainly appreciate the Australian volunteer program, and have some insight into it at the working level.

One of the really good things about the ODE evaluation is that it is based on survey data. The evaluation undertook a survey of host organisations across three countries (Cambodia, Vietnam and Solomon Islands) – the first ever such survey we understand. The evaluation also draws on another survey, separately commissioned by (then) AusAID, on returned volunteers.

It is a pity that the evaluation has not included more data from the two surveys. A simple example is that we don’t know the average age of a volunteer. This might sound like a small point, but one of the main arguments of the report is that there is very little difference between youth volunteers (AYADs) and other volunteers (non-AYADs), including in terms of age. If that is the claim, we should be told the average age of the two groups. We are given some data on age ranges, and from that I calculate that the average age of an AYAD is 28, and that of a non-AYAD 45. That is a big difference.

There should have been more data tables, and, beyond that, we would like to request ODE to release the survey of host organisations. We would also like to request DFAT to release the report on the returned volunteer survey, which I understand has been written but not published. You can’t cite extensively from a report and then not release that report, which is the situation at the moment.

It would also have been good if the host organisation survey had asked a few more questions. At one point the evaluation calculates that the cost of a volunteer for a year is about $70,000. The survey should have asked host organisations if they would have rather had the volunteer or $70,000 in cash. That would have been useful information. Such information would be useful in reaching a judgement as to how much of the cost of the volunteer program was justified by its development objectives, and how much by its benefits to the volunteer.

The survey does ask whether a national could have done the job just as well as the Australian volunteer. It finds low response rates from Vietnam and the Solomon Islands, but finds that half of all Cambodian host organisations answer yes to that question. That is a worrying response, given the skill shortages in any poor country. It seems to me there should be an investigation into the Cambodia volunteer program to find out what is wrong. Cambodia may simply have too many volunteers. It has the second highest number of Australian volunteers of any country.

Overall though, I applaud the data collection exercise. The discussion that follows in this and my next post is around the interpretation of the data, and its limited use.

An entire chapter of the evaluation is in fact devoted to the “impact of volunteering on host organisation capacity development” (Chapter 4). The bottom line of this chapter is Recommendation 5 which contends that “DFAT should refocus the AVID program on developing the long-term capacity of host organisations.”

This is the first in a three part series based on Stephen’s presentation at Devpolicy’s recent ODE evaluations forum. Robin Davies’ analysis of the Lessons from Australian Aid report can be found here.

[1] In fact, the evaluation finds that efforts to help in areas judged by it to constitute capacity development were linked with reduced satisfaction. Perhaps organisations, in general, don’t want volunteers to help them manage their internal affairs. They want them to do what they are skilled at, or whatever specific task they have been assigned.