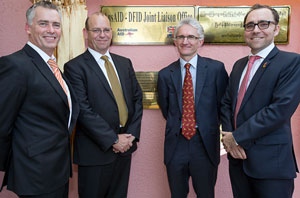 Our Australian actors and directors look to Hollywood for the latest and greatest innovations and directions; our chefs look to France and Spain for culinary inspiration; and our gambling barons keep an eye on Macau for how to remove money from punters’ pockets. In the aid world, however, Australia seems to follow the United Kingdom quite closely.

Australia has been following the UK’s lead in striving to scale up its aid program while most other donors cut back. But the similarities go much deeper. The results [pdf] of the UK government’s twin reviews of bilateral and multilateral aid were released in March 2011, highlighting key messages around results-based aid, fragile states, gender, multilateral aid effectiveness and narrowing down the number of countries receiving support (including stopping aid to India and China).

The Australian Government’s aid review was released only four months later, in July 2011, and highlighted some similar themes (not all of which were adopted) including selectivity of effort and a focus on results as well as an emphasis on work in fragile states. In addition, Australia followed the UK in ending aid to China and India.

Subsequent to the reviews, both agencies put a considerable amount of emphasis on their respective results frameworks (see here [pdf] and here [pdf]). The two frameworks are structured almost identically with high level development outcomes as primary followed by the contribution by the respective aid program with internal operational and organisational effectiveness coming next.

Again similarly, the DfID Multilateral Aid Review [pdf] was released in March 2011. The Australian version – the Australian Multilateral Assessment [pdf] – came out in July 2012 and also had remarkably similar findings with GAVI, UNICEF, ICRC and the World Bank standing out and UNESCO, the Commonwealth and FAO bringing up the rear. Even though the terms of reference for the Australian version explicitly stated that it aims to avoid duplication of the UK review, the findings have considerable overlap.

In a further follow-the-leader action, Australia signed its development cooperation understanding with China in April 2013 less than two years after a similar agreement [pdf] between the UK and China. These are the only two such agreements entered into by the Chinese government.

AusAID and DfID do not just seem to be in lock-step in the policy document world but, more importantly, the two organisations actively cooperate on program delivery in some of the most challenging settings in the world. In a number of countries, AusAID partners closely with DfID and delivers Australian aid monies through DfID-run mechanisms. Australia’s $30m health contribution to South Sudan is directed through the DfID-managed health pooled fund and, in Zimbabwe, Australia’s food security contribution– the Protracted Relief Programme – as well as some of their health funding was channelled through DfID. In January of this year, Australia and the UK opened a joint office [pdf] in Myanmar to strengthen development cooperation in that country in a partnership that will hopefully be a bit more equal. From an aid effectiveness perspective, these types of partnerships and aid modalities are to be encouraged and promoted.

This close collaboration emerges from the 2008 partnership agreement [pdf] between AusAID and DfID that highlighted working together across such areas as the MDGs, climate change, delegated partnerships and aid effectiveness. The formal partnership between the two agencies is meant to leverage each organisation’s strengths – though, to date, is seems AusAID might be getting more out of the deal than DfID. But the agreement does position AusAID and DfID as formidable collaborators working towards more effective aid policy and delivery.

In addition to the strategic following and programmatic collaboration, a considerable number of ex-DfID staff are now in key technical positions within AusAID, bringing a decidedly British flavour to the organisation. The AusAID Principal Governance Specialist as well as the Principal Health Specialist both used to work for DfID, as did a couple of other members of the senior health team. The Education Resource Facility – which provides real-time technical advice to AusAID – is headed by an ex-DfID employee and the Health Resource Facility, contracted to the British firm HLSP, is also headed by an ex-DfID professional and has predominantly hired Brits to the consternation of some Australian experts.

Of course, the critical question emerging from the strong linkages between DfID and AusAID is: is this a good thing or problematic. In this author’s opinion, mainly based on experience working on donor coordination in the African context, DfID is the most thoughtful, impactful aid partner among bilateral (and multilateral) partners. In my interactions, DfID staff were, by and large, technical experts with considerable experience working closely with government, thinkers who adapted programs to suit the needs of the country. In this way, AusAID could do much worse than following the British lead.

There are of course some key differences between DfID and AusAID with DfID’s independence from the Foreign Office and having its own cabinet minister being primary (a recommendation of Australia’s aid review that was rejected). There is also much stronger and deeper public support for aid in the UK (though this might be faltering in the face of economic challenges) as compared to Australia.

So what should future UK-Australian aid collaboration entail? Most importantly, Australia should follow the UK lead in continuing to increase aid budgets as promised – even in the face of economic challenges. More functionally, joint multilateral reviews – rather than separate but remarkably similar ones – would seem to be a good investment. With regard to technical advice, given that at present much of the evidence being sourced by Australian resource facilities already has a British flavour, some type of joint advisory panels might make sense to leverage a wider range of expertise and to avoid duplication. In addition, AusAID operates in some countries where there is not an Australian Embassy or High Commission (Mongolia, Mozambique, Zambia) and therefore co-location of offices would allow AusAID officials to leverage British presence for additional in-country impact. Future delegated partnerships should also be encouraged to improve aid effectiveness. One would hope that DfID might channel money through AusAID-managed programs rather than an exclusive flow the other way around.

Despite these suggestions, there are risks in following the UK model too closely. Australia, as it scales up its aid and engages more deeply with partners and governments, should be seeking expertise and ideas from a broad range of partners. Most Australian companies have a few employees with English experience but that is often balanced with a few Americans and a few others. I am yet to meet an AusAID staff member with experience from working with USAID or one of USAID’s many closely-partnered NGOs and agencies. While many critique American aid, they do deliver more aid than anyone else in the world to a hugely diverse range of countries. As a Canadian-Australian, I am largely neutral in this but do think that more diversity of opinion and perspective would benefit AusAID’s internal strategic and implementation debates.