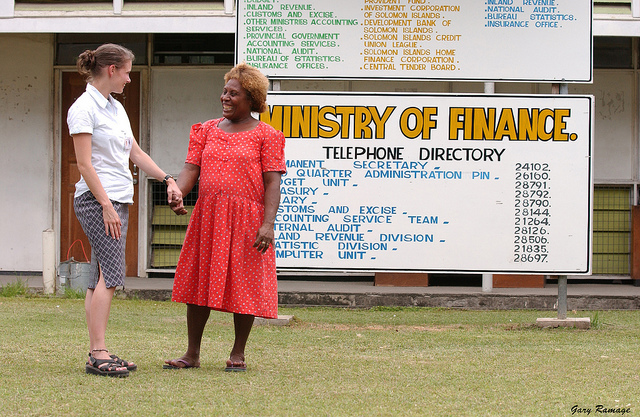 Over recent years, there has been growing focus on ‘political settlements’ entailing state-building operations that purport to ‘share sovereignty’, and thereby address pressing development issues. What happened in Solomon Islands has been identified by The Economist as a ‘radical’ example of such G2G (Government to Government) delegation agreements.

The term ‘political settlements’ has become popular largely because of its vague and generalist applicability to (among other things) treaties that facilitate foreign intervention, so-called ‘partnerships’ around aid delivery and elite settlements within countries. That ambiguity is not addressed by defining such arrangements as any ‘ongoing processes of bargaining’.

Although the focus is often on whether ‘political settlements’ are or not ‘inclusive’, assessments of inclusiveness are often equally vague. At their crudest – where defined with reference to terms reached with donor organisations – they refer only to the presence (or absence) of some kind of host-state signing-off process or consultations around implementation (which can later, and/or on official occasions, be described as a ‘partnership’).

The Australian-led Regional Assistance Mission to Solomon Islands (RAMSI), which commenced in mid-2003, assumed control over key parts of the state. Policing, the prison service, tax and customs duty collection and several other critical functions of the Ministry of Finance were placed under the control of RAMSI expatriates. Unlike the short-lived UN missions to Kosovo and East Timor several years earlier, RAMSI did not hold executive authority.

The elected government, which had invited RAMSI into the country, remained in office, even if the 2001–6 Prime Minister Sir Allen Kemakeza largely acquiesced to what many called a ‘shadow government’ or an emerging ‘parallel state’.

Solomon Islands came to be widely seen not only as a test case of de facto contracting out of sovereign powers, but also as a model demonstrating the feasibility and desirability of such state-building approaches in ‘failed’, ‘fragile’ or ‘weak’ state contexts.

This assessment tells us more about prevailing concerns in the donor and scholarly communities (and the theories of sovereignty they embrace) than it does about what actually happened on the ground in Solomon Islands over 2003–15, or how this was perceived by Solomon Islanders themselves.

Throughout the RAMSI years, the mission remained broadly popular, but was largely perceived locally as a police assistance programme designed to restore law and order.

The initial RAMSI Special Coordinators did describe their future objectives as ‘state-building’, but initially focused primarily on arresting militant leaders who had destabilised the country over 1998–2003, and the destruction of their weapons. This was mostly achieved in the initial phase of the ten-year mission.

Efforts to implement ‘good governance’ and economic liberalisation reforms encountered local resistance culminating in a crisis in 2006–7, and the election of a government that wanted to revise the RAMSI-enabling legislation.

Then Australian foreign minister Alexander Downer responded that RAMSI was an ‘all or nothing’ package, and that local politicians had to accept the deployment into civilian ministries as well as the more welcome security assistance.

It was tensions within the fragile Solomon Islands political order that sparked riots in April 2006, which saw the burning down of Chinatown, but RAMSI personnel and vehicles were targeted during the troubles. The short-lived government of Snyder Rini collapsed shortly thereafter.

The incoming Sogavare government objected to RAMSI’s terms of deployment, and wanted an ‘exit strategy’. This period saw the expulsion of an Australian High Commissioner and an Australian police chief was declared persona non grata.

After the events of 2006–7, the Australian government toned down its ‘state-building’ intentions, and opted instead for a minimalist redefinition of RAMSI’s objectives as it prepared an ‘exit strategy’.

Kevin Rudd’s ‘Partnerships’ with Pacific governments were rolled out over 2008–9, but ‘struggled to gain traction’ in Solomon Islands. Most Solomon Islands politicians and senior civil servants opted for the Melanesian strategy of studied indifference to the RAMSI reform programme, allowing this to continue unimpeded, but with minimal local buy-in. Silence was not consent.

This experience prompts some former RAMSI officials to now query the wisdom of the Paris Declaration invocation of ‘partnerships’ and propose a more radical strategy of ‘co-production’ or ‘sharing’ of sovereignty, but such proposals only highlight the absence of any meaningful ‘political settlement’ with (or among) Solomon Islanders.

The irony, in the Australia/Melanesia context, is that enthusiasm for ‘shared sovereignty’, and the depiction of the RAMSI experience as entailing a ‘political settlement’ with external interveners, has grown in popularity just as the mission winds down, and after it becomes apparent that there was little local buy-in.

‘Shared sovereignty’ is a red herring. Not all sovereignties are to be shared, only those of weak states. But even ‘fragile’ states, such as that in Solomon Islands, tend to resist ‘sharing’ sovereign powers. Intervening states, like Australia, are not in practice disposed to acquire direct responsibility even for what Jean Bodin once called the ‘marks of sovereignty’.

External assistance will likely continue to figure prominently in Solomon Islands beyond the 2013–17 Australian government funding cycle, but will be focussed on sustaining various functions rather than forging any overarching state coherence. We should not draw the verdict from the RAMSI experience that difficulties arose due to an absence of sufficiently extensive external controls.

Jon Fraenkel is a Professor of Comparative Politics at Victoria University of Wellington, New Zealand, and co-author, with Ratu Joni Madraiwiwi and Henry Okole, of ‘The RAMSI Decade: An Independent Review of the Regional Assistance Mission to Solomon Islands’ [pdf]. His latest article, ‘The Teleology and Romance of State-Building in Solomon Islands’ is available here [pdf]. An earlier version of the article is available here.