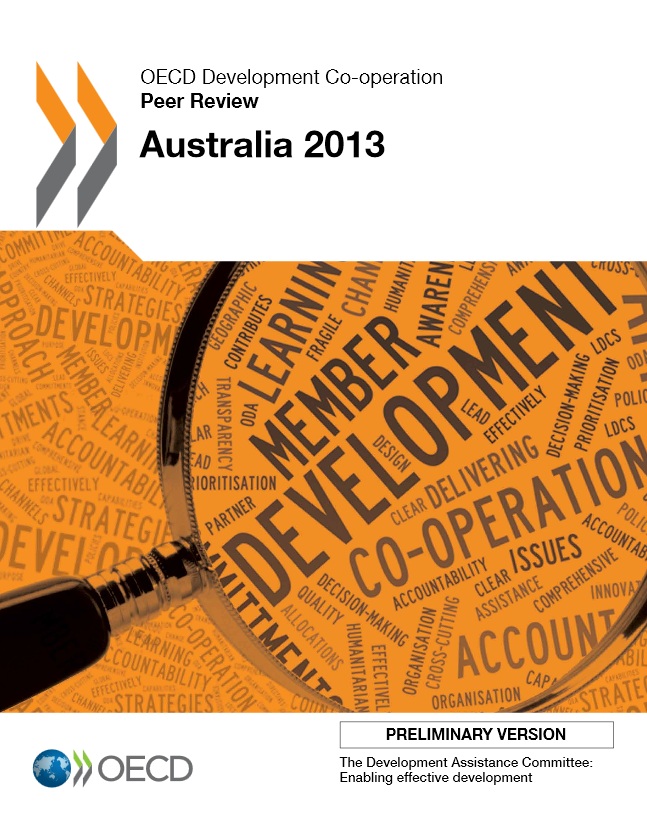 The OECD’s Development Assistance Committee (DAC) undertakes peer reviews of its member countries’ aid programs every four years or so and has just completed its most recent review of Australia’s program. The full report is here—it’s long but you can absorb the main findings and recommendations quickly enough.

The last review [pdf] was done in 2008, early in the life of the Rudd Labor government, at a time when there was something of a vacuum where the previous government’s policy framework (the 2006 White Paper [pdf]) had been. That review was positive about the Rudd government’s strong emphasis on poverty reduction, the Millennium Development Goals and increased multilateral engagement, and about the decision to appoint a Parliamentary Secretary for International Development Assistance, the widely-missed Bob McMullan. Essentially it found the program had a bright future, provided it put in place a new policy framework and followed through with reforms to ensure the planning and management of the rapidly-growing program was placed on a firm footing.

The 2013 review emerges in a very different context. On the positive side, a great deal has been done to strengthen the policy framework and the administration of Australia’s aid program. On the negative side, fiscal imperatives are such that further steep growth in the aid budget seems increasingly unlikely, and the government’s decision last year to postpone meeting its 0.5 per cent aid/GNI target until 2016 has caused (or allowed) the opposition to place its own 0.5 per cent commitment in the “when fiscal circumstances permit” pile. (Oddly, the DAC review misses this evaporation of the bipartisan commitment to a dated target.)

The review’s headlines are rightly very positive. It points to an “unprecedented reform of Australian development cooperation,” as part of which “AusAID has gone through the biggest change in its history”. It lauds the Independent Review of Aid Effectiveness and the government’s response to it, including the development of the Comprehensive Aid Policy Framework, the adoption of a thoroughgoing approach to transparency and the transformation of AusAID into an Executive Agency. It notes “Australia’s dynamic approach to being a good international citizen, punching at or above its weight”. AusAID’s generally accurate account of the findings of the review takes some license in saying that it situates Australia “at the forefront of best practice in aid delivery and effectiveness”. (You can search in vain for a statement to that effect in the review itself.) However, the headline in The Australian, “Aussie aid program gets good review” is quite correct, and a welcome change from most of that newspaper’s headlines about aid.

Now DAC aid reviews are collegiate, constructive and gentle affairs. Everybody around the table is conscious that their turn is coming, that criticisms might be seized upon and distorted for political purposes, and that reforms, where needed, are more easily undertaken from a position of strength. Thus nothing is ever deplored, condemned or found merely woeful. Encouragement is the order of the day. This 2009 review of our near-namesake, Austria, is about as brutal as it gets. Faults are usually “challenges”, to be met not by wrenching change but by intensified effort. In short, criticisms are generally coded and also often linked to balancing strokes.

There are several instances of this stroke-then-strike approach in the review. First and most notably, the growth of Australia’s aid (to 0.36 per cent of GNI in calendar 2012, compared to 0.29 per cent for the DAC donors collectively) is commended but the government’s decision to postpone achievement of the 0.5 per cent target is politely criticised on the basis that Australia’s public finances are, from an OECD-wide perspective, in relatively good shape. The review says Australia is “in a very strong position to deliver a growing aid budget effectively and efficiently” and urges its government, whoever that might be after 14 September, to stick to the revised 0.5-by-2016 target.

Second, while Australia’s whole-of-government approach to policy-making is noted, the review points to a lack of evidence that this has resulted in real policy coherence—that is, the modification of non-aid policies either to enhance their positive development impacts or mitigate their negative impacts. One example of policy coherence that is cited in the review, the Seasonal Worker Program, is in fact poorly chosen; as we have argued previously, that program is actually a textbook case of policy incoherence.

Third, the review gives some prominence to Australia’s commitment to use aid “as a catalyst for raising private investment to promote development” and makes positive mention of the Mining for Development Initiative and the new private sector development strategy. At the same time, it urges Australia, with other donors, to “invest in research and analysis to clarify how [aid] can best attract other forms of development-friendly investment to developing countries”. We’ve urged the same, here.

There are several other examples of double-edged findings. The allocation of Australia’s aid to countries is seen as sensible, with high priority accorded to fragile states and increasing priority to the least-developed countries—but the scattering of activities across Africa and Latin America gives rise to a small frown. (By the way, the review says, incorrectly, that Australia has “an explicit focus on targeting poor people rather than poor countries” as a result of its proximity to “populous middle-income countries”.  Implicit, maybe, but no such policy has been explicitly stated.) AusAID’s restructuring is described as “impressive and complex” but there is a caution about reform fatigue. The establishment of an Independent Evaluation Committee is welcomed but the review recommends “increasing the quality, usefulness and transparency of … operational evaluations”.

Then there are some things that just get a straight thumbs-down. Most obvious among them is one of the Development Policy Centre’s own abiding interests: the abrupt reallocation, in December 2012, of $375 million within the aid budget to meet domestic asylum-seeker costs. The review describes this mid-stream move as undermining the predictability of Australia’s aid and notes also that it represents a major, yet unexplained shift in Australia’s policy on what is counted as aid. The review recommends, as we have recommended ourselves, that “In line with [AusAID’s] Transparency Charter … Australia should state clearly what refugee costs will be counted as [aid] over the coming years and explain how the costs are calculated”. The review notes that Australia intends to ensure consistency with DAC guidance on the reporting of aid but also that “there are wide discrepancies in DAC members’ interpretations of the rules for reporting on in-donor refugee costs”.

In another thumbs-down, the review questions, as we have questioned, the reliance on highly aggregated headline results in the Annual Review of Aid Effectiveness and recommends that AusAID should ensure it “captures and reports results that are being tracked in more detail within individual programmes and reported in independent and operational evaluations”.

Less egregiously, it finds that Australia is lagging in four areas covered by recommendations of the 2008 review, namely (i) working through partner-government systems, (ii) sharing lessons with the DAC membership on its experience of working jointly with other donors, (iii) better integrating environmental protection into all relevant strategies and programs and, importantly, (iv) strengthening public communication about the aid program’s objectives and achievements, and also the challenges it faces.

The review gets a few things wrong, as noted above. And it’s fairly weak on multilateral aid relative to the 2008 review, making little of the fact that the growth in Australia’s funding for multilateral organisations has been achieved largely through earmarked allocations from country programs rather than through selective increases in core funding to high-performing agencies.

Overall, though, it’s a comprehensive and balanced effort, which fact adds credibility to its predominantly positive findings.  At any time, but particularly on the eve of a tough budget, this is exactly the kind of report card that a donor agency hopes to receive.