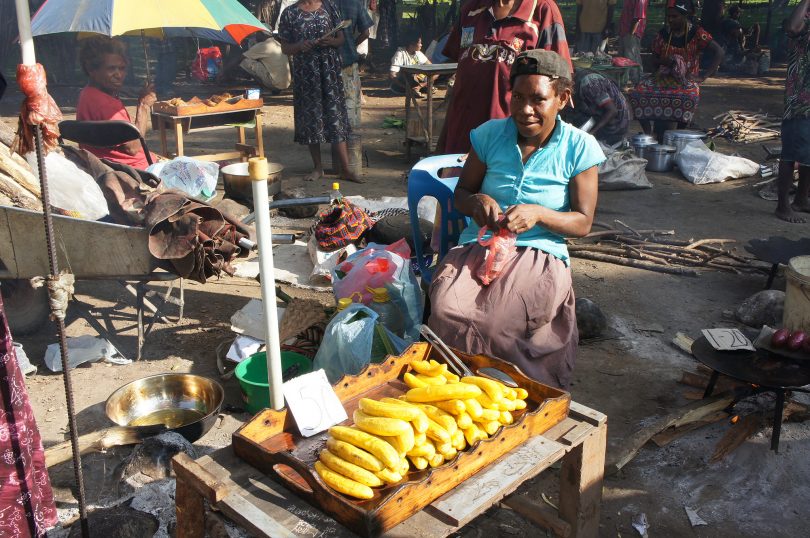 The informal economy in Port Moresby is once again under siege. The National Capital District Commission (NCDC) has announced another ban. This one will target street sellers of cooked foods. The end of this week is shaping up to be D-Day for street sellers in the city.

The last ban was the controversial betel nut ban introduced in 2013 that was eventually replaced in 2018 by a partial ban. Stories of abuse, harassment and deaths that unfolded at the height of the betel nut ban are still fresh in the memories of many city residents. The ban quickly turned into a game of “cat and mouse” as smuggling became a new phenomenon. Defiant betel nut vendors, buoyed by the prospect of huge gains, colluded with law enforcers to smuggle in large quantities of betel nut into the city. The dramatic fall in the supply of betel nut saw prices go through roof. This caused a frenzy as producers, middle-men, transporters and retailers did anything and everything under the sun to cash in. Even law enforcers were not spared. There were media reports of police barracks that were awash with betel nut as families of police officers set up tables/stalls to sell betel nut that that had been confiscated or smuggled.

Instead of addressing the hygiene and health problems it intended to solve, the ban made the betel nut industry even more lucrative. The winners were the law breakers. Families’ livelihoods and childrens’ education were adversely affected. Threats of legal challenge were made as the ban took its toll on those that depend on betel nut for income-generation. If contested in courts, the ban may have been found to be illegal in light of the Informal Sector Development & Control Act 2004. In the end it was clear that the ban was a disaster and a more sensible solution was required, such as the set-up of a designated market for betel nut or issuance of licences/permits.

Spaces within established markets like Gordons and East Boroko are not sufficient to cater for all vendors. To make matters worse, most street and roadside markets that would have eased the pressure of overcrowding have been removed. Gordons Market is still under renovation. If, as a result of the ban, street vendors are forced to move into the established market, it will only lead to overcrowding and intense competition for space, leading to confrontation between vendors. This will force street sellers to go out onto the streets to trade even while the ban is in full force.

Most of the cooked food being sold in the streets of Port Moresby comprises of garden foodstuff sourced from local farmers and egg products procured from local supermarkets. The egg products are mostly sourced from local informal poultry farmers who supply chickens to big suppliers such as New Guinea Table Birds and Zenag. The cooking undertaken requires little capital or skill, and supports a sizeable portion of the city’s unemployed and low-skilled population.

Recent data from the National Audit of Informal Economy show that about 13% of women and 8% of men living in NCD are involved in selling cooked food. These vendors also contribute to NCDC’s coffers through the Goods & Services Tax (GST) on the goods they purchase to cook and/or sell.

The ban may be a convenient tool for the NCDC and other urban authorities, but history shows us that – as with the betel nut ban – it is likely to only be effective for a short time. A more workable and sustainable solution is needed. Bringing all the concerned parties to the table to dialogue will go a long way in achieving this outcome.

Why the NCDC has again gone for a total ban on the sale of cooked foods, when it itself concluded that this would not work for betel nut, is really beyond comprehension.