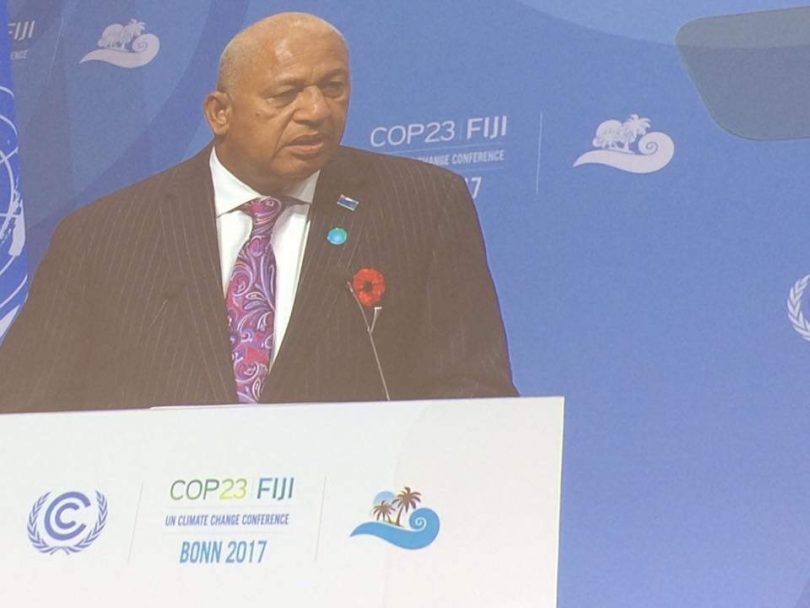 For the next two weeks, the United Nations Framework Convention on Climate Change (UNFCCC) Conference of the Parties (COP23) will take place in the winter lands of Bonn, Germany – but with a warm Bula of inclusiveness, friendliness and solidarity. Dubbed the Islands COP or Fiji/Pacific COP, Fiji in partnership with Germany, will chair the climate talks from Nov 6-14. Fiji Prime Minister and President of COP23, Voreqe Bainimara, has set the vision of the meeting  in forging “a grand coalition to accelerate climate action before 2020 and beyond between civil society, the scientific community, the private sector and all levels of government, including cities and regions.”

What to expect at the Island COP?

At the conclusion of the October pre-COP meeting in Suva, Fiji identified four outcomes it hopes to achieve: advancing the Paris Agreement Work Programme (Paris Rulebook) negotiations; focus on finance to deliver the $100 billion per year by 2020; managing climate risk and building resilience; and raising the ambition of countries’ voluntary Nationally Determined Contributions (NDCs) to lower greenhouse gas emissions.

With over 20,000 participants, COP23 is expected to be technical in nature, focusing on issues related to operationalising the Paris Agreement 2015. Of priority will be negotiations and work related to the Paris Rulebook via the Ad Hoc Working Group on Paris Agreement with the hope of a negotiating text to be drafted. Other technical issues parties will discuss are: the mitigation section of decision 1/CP.21 (the Paris outcome); adaptation communications; transparency framework for action and support; global stocktake; and mechanisms to facilitate implementation and promote compliance of the Facilitative Dialogue.

The Island COP is vital in setting the process and pace for the implementation of the Paris Agreement in 2020. The COP Presidency is expected to continue to consult on the 2018 Facilitative Dialogue. The global consensus achieved in Paris 2015 was in part because of the ambiguous agreement text on implementation, in which the COP21 decisions mandated that certain elements be agreed upon in a Facilitative Dialogue. Poland will host COP 24, where the Dialogue will be a precursor to the 5 yearly NDC’s Global Stocktakes, which will take place starting in 2023. Fiji and Morocco (COP22 President) will detail in full the process over the next two weeks; an informal note was circulated to indicate a preparatory timeline in 2018, called the ‘Talanoa Dialogue” process.

As the first small island state to chair the auspicious political decision-making body on global climate change action, Fiji has employed innovative partnerships in its diplomatic endeavour. Hosting a COP is expensive: Copenhagen 2009 endured a price tag of €182 million, and Paris 2015 with €172 million. Escaping this hefty expense, it has partnered with Bonn, Germany, a city not unfamiliar to hosting such events, having hosted two previous COPs. Some have found irony in the choice of co-hosts: an island nation at the frontline of climate change, and a city which hosts Germany’s biggest coal mine.

Fiji has stated from the beginning that its presidency will be a platform to showcase the ambitions of small island states, especially those of the Pacific. It will tell a story of resilience through adaptation and mitigation leadership, but at the same time highlight vulnerability to climatic disasters such as recent Hurricanes Harvey, Irma, Jose and Maria.

A key factor which makes or breaks multilateral conferences is the capacity and diplomatic finesse of the chair. The Danish chair at Copenhagen COP15 was accused of holding secret negotiations behind closed doors with selective states. In an attempt to restore legitimacy to the climate negotiation process, Durban’s indaba process (meeting open to all ministers level) at COP17, and the egalitarian model of Comité de Paris (open to all countries but limited to four representatives per country) at COP21 were hallmark legacies of the respective South African and French chairs.

Fiji is introducing the Talanoa process as the mechanism for Facilitative Dialogue:

Talanoa is a traditional word used in Fiji and the Pacific to reflect a process of inclusive, participatory and transparent dialogue…The process of Talanoa involves the sharing of ideas, skills and experience through storytelling. During the process, Parties build trust and advance knowledge through empathy and understanding. Blaming others and making critical observations are inconsistent with the building of mutual trust and respect, and therefore inconsistent with the concept of Talanoa. Talanoa fosters stability and inclusiveness in relation to dialogue, by creating a safe space which embraces mutual respect for a platform for decision making for a greater good.

Negotiators and observers at Bonn are paying close attention to whether this Fiji/Pacific style of negotiations can facilitate consensus. Whether or not it delivers, the Talanoa process will be Fiji’s legacy in the climate negotiations.

As a facilitator of climate leadership, through its shuttle diplomacy, Fiji has had to build inroads and break the climate coalition ‘firewall’ between Annex I parties (developed north) and the global south coalitions. Similar to the path that Marshall Islands took in building the High Ambition Coalition in 2015, the island state has reached out and engaged in dialogue with powerful polluters like China, India, Brazil, EU, Australia, and New Zealand while calling on the reluctant United States to raise its ambitions on climate action. This is a different tune to what Bainimarama once called the same group as the ‘coalition of the selfish’ back in 2015. Certainly the Chair role has opened up the doors for Fiji to dialogue and be taken seriously. This has also meant that it has had to transform its narrative of negotiator activist, to a chair ‘friends to all, enemy to none’, at least in the case of its climate change diplomacy in 2017.

Civil society and the private sector have also taken a more active role in the consultations under Fiji’s presidency. At the UN General Assembly in September, the presidency met with broad range of stakeholders to garner both views and support leading up to COP23. Some of these groups of NGOs from the Pacific joined allies over the weekend in Bonn for the Peoples Climate March 2017 calling out fossil fuel/coal industries and pushing for agreement on implementing the Paris Agreement. Fiji has also recently become only the third country to issue green sovereign bonds of USD$50 million, proceeds of which will used to fund climate resilience infrastructure and renewable energy in the country.

COP23 caps a phenomenal five year journey of Fiji’s diplomatic rise in the global/regional multilateral leadership space. It started with its shake up of the regional architecture and promises of the Pacific Islands Development Forum, and chairing the global south coalition G-77 and China in 2013. This was in part a product of the thinking behind a revitalised 2015 Fiji foreign policy. Fiji’s sights were set on global stewardship, with its UN top diplomat Peter Thomson elected President of the UN General Assembly in 2016. That enabled a pathway to partner with Sweden to co-host the UN Oceans Conference in July this year.

In his official speech as incoming COP President at the opening ceremony, Bainimarama stated “(t)his is our moment of truth when all of us in this room will be tested. We must not be found wanting.” While directed at climate negotiators, it also encompasses the challenges Fiji faces as it starts it role officially for the next 12 months. It has been a smooth ride in the conference preparations to date, but the next two weeks will certainly test the President’s eclectic top diplomatic team in meeting the expectations of all states, in one venue. But the story and lessons of diplomacy from this island nation will not end here. As it guides the multilateral Talanoa Process throughout 2018 in various forums and capitals, Fiji will also gain access to more direct opportunities for its domestic base, and bilateral attention on future diplomatic aspirations.

Salā George Carter is a doctoral candidate and lecturer at the Department of Pacific Affairs, Coral Bell School of Asian and Pacific Affairs, CAP, ANU. His research focusses on Pacific islands states in international and regional climate change negotiations. His work experience and current research interests, are in the areas of diplomacy, international relations, Pacific regionalism, development and climate change.