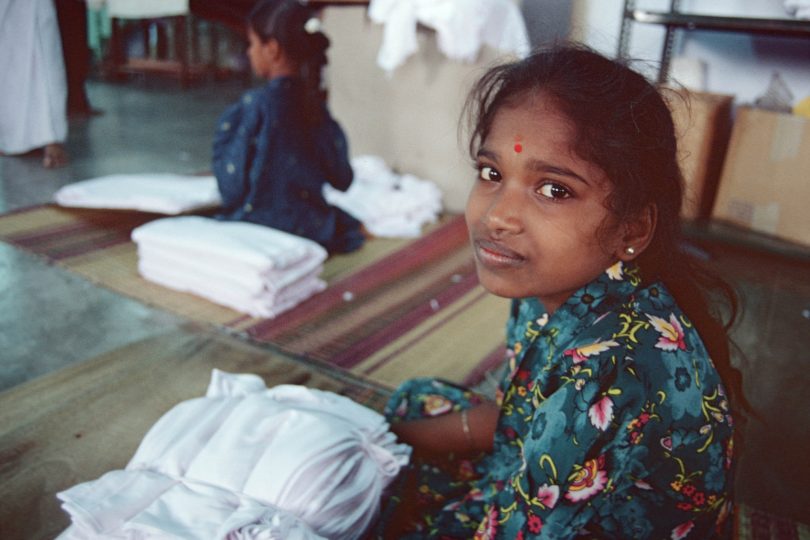 Modern slavery, as defined by the Walk Free Foundation, “refers to situations where one person has taken away another person’s freedom – their freedom to control their body, their freedom to choose to refuse certain work or to stop working – so that they can be exploited”.  According to this definition, there are an estimated 40.3 million slaves in the world. This number includes 24.9 million forced labour slaves who generate 150 billion USD in annual profits, and 15.4 million forced marriage slaves.

The prevalence of forced labour slaves is greatest in our own neighbourhood of Asia and the Pacific and can take many forms. It may include migrants picking the fruit you eat in Australia or New Zealand, constructing buildings in the UK or coercing a 12 year old Cambodian at gunpoint to work ten-hour days stitching your shirts. During my own research into irregular migration, we discovered migrants who had their documents withheld being forced to pay off people smugglers’ debt by working long hours without pay.

Many acts of slavery are difficult for Australians to address. What we can do, however, is reduce the likelihood that Australian companies are complicit in supporting modern slavery, particularly forced labour slavery. It is with the goal of supporting the business community respond more effectively to modern slavery that the government has proposed the legislation of a Modern Slavery Act in 2018. As proposed in the Australian government’s consultation paper, an annual disclosure requirement (outlining a company’s actions to address modern slavery in their operations and supply chains) will apply to the approximately 2,000 companies and entities earning revenue in excess of AUD 100 million per annum. Note, a recently-concluded Australian parliamentary inquiry recommended that the limit be revised downward to AUD 50 million per annum.

The government and opposition should be applauded for their bi-partisan commitment towards a Modern Slavery Act. It follows in the footsteps of similar legislation in the UK and France.

Yet there remain concerns that the Act will not go far enough to address modern slavery. The concern I want to address is the government’s suggestion that compliance with the Act would only require a “light touch” approach – estimated at $11,500 per annum (an amount which may be subject to revision after consultation with the business community). This represents a maximum of 0.012% of an applicable company’s revenue stream – which is not even considered an accounting rounding error.

Given the estimated $11,500 bill, companies that view regulation as an irritant can simply undertake a tick the box exercise.  Clearly this is against the spirit of the proposed Modern Slavery Act. If a company is serious about eradicating slavery in their supply chain, for example through creating an over-arching policy framework, undertaking risk analysis, formulating procedures to counter those risks, identifying slavery, and eliminating slavery, it would cost more than $11,500.

More pointedly, is $11,500 per entity really the value the government is expecting businesses to spend to more effectively respond to modern slavery? Consider in contrast that ASX 200 companies pay an average of over AUD 3,000,000 to auditing firms [paywalled] to analyse their financial accounts. If these companies pay so much to provide financial comfort to shareholders, surely they can be expected to allocate more than $11,500 – or two business class return flights to London – to provide a degree of ethical comfort as well.

Perhaps instead of highlighting the $11,500 figure, the government can provide a range of expected costs, to cater to companies that provide minimalistic statements, and those that aspire to provide more detailed consideration to their anti-slavery efforts.  Costs of producing roadmaps for companies to engage in anti-slavery best practice (see Konica Minolta’s roadmap) – and even costs involved in reaching ethical sourcing best practice (see here and here for examples) could be presented.

Only with a pathway to reach best practice will we truly address slavery in our supply chains. This may not be possible if, at the outset, we expect companies to take a ‘light touch’ approach to anti-slavery efforts, without even highlighting the costs associated with a more comprehensive anti-slavery approach.

This is part one of a two part blog on modern slavery, part two discusses how anti-slavery efforts could be profitable for business.