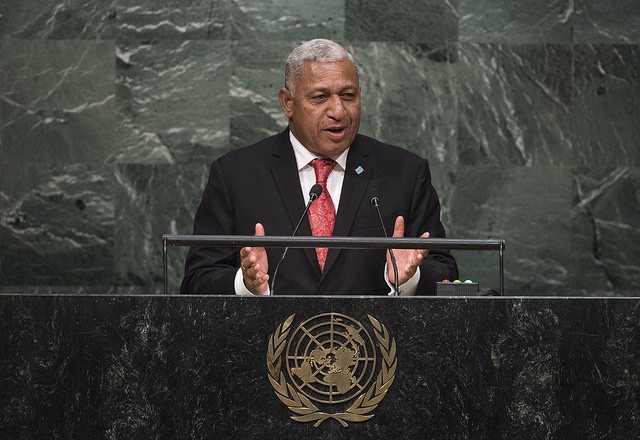 The Papua New Guinea government recently removed fifteen Australian advisers from its public service, as promised in mid-2015. The Australians were working in the departments of finance, transport, treasury and justice, key parts of the country’s administrative structure. The PNG government left eighteen others where they were and the advisers’ departure is not likely to disturb good relations between PNG and Australia.

Yet the event symbolises a new sense of national independence in PNG, one shared with two of the other three independent Melanesian countries; Solomon Islands and Fiji. The three Melanesian states are expressing a new willingness to go their own way whatever Australia might think. Vanuatu, the fourth, has an independent foreign policy but is too small (population 258,000) to exercise much influence internationally.

PNG seeks regional leadership in the Pacific, and has become an aid donor to neighbouring Pacific island countries, offering Solomon Islands almost AUD$40m for a five year development program and giving assistance to Samoa, Tonga, Tuvalu and Palau. The PNG of 2016 is emboldened by its resources boom, which is experiencing a temporary dip but is likely to surge again by the early 2020s. In an unprecedented initiative for a Melanesian country, PNG will host the APEC leaders’ meeting in Port Moresby in 2018 (with a great deal of security assistance from Australia, New Zealand, the USA and Israel).

Even Solomon Islands, the beneficiary of a decade’s presence of the Regional Assistance Mission led by Australia, is diversifying its international links, establishing new diplomatic missions in Kuala Lumpur, Jakarta and Havana in 2013; and Wellington in 2014.

Nowhere is the new Melanesian independence clearer than in Fiji. The 2006 military coup delivered power into the hands of a military commander – Frank Bainimarama – who later abrogated the constitution and ruled for years by decree before finally bowing to international opinion and holding an election in 2014. Australia and New Zealand imposed extensive travel bans, ensured Fiji was suspended from the Pacific Islands Forum (the key regional organisation) and isolated Fiji diplomatically.

Bainimarama mounted a counter-response, one that has become a permanent feature of Fiji’s international stance. Fiji joined the Non-Aligned Movement and extended its diplomatic reach, setting up new embassies in South Africa, Brazil, South Korea, Indonesia and the United Arab Emirates. At the UN Fiji made the Pacific Small Islands Developing States group (11 Pacific countries) an effective grouping, and in 2013 was chair of the G77, the UN grouping of 134 developing countries. Fiji grew notably closer to China, sending military officers to Beijing for training, accepting a notable amount of Chinese aid and welcoming investment in Fiji mining by Chinese companies. Fiji rolled out the red carpet for Xi Jinping when he visited Fiji in 2014, and Fiji soldiers participated in China’s V-Day parade in 2015.

As elsewhere, China in the South Pacific is a strict observer of the sovereignty of independent countries and saw no problem in maintaining good relations with a military regime. Bainimarama regularly thanks the Chinese government for standing by his government during the post-coup years when it was being isolated by Australia and New Zealand.

Regionally, Bainimarama has competed with Australia and New Zealand. Suspended from the Pacific Islands Forum (PIF), he formed one of his own, and it excludes the Australians and New Zealanders. This is the Pacific Islands Development Forum (PIDF), whose annual meetings are timed to create maximum embarrassment by taking place a week before the Forum meeting itself, an approach that allows Fiji to pose as a regional leader of small island states with their interests at heart, in contrast (it is intended) to Australia and New Zealand. The PIDF produced a strong declaration on climate change last September [pdf], for example, a few days before Australian and New Zealand diplomats struggled to make the PIF’s own declaration sound stronger than it actually was.

Another regional organisation – one that has never enjoyed support from Australia – is also growing in influence. The Melanesian Spearhead Group (MSG) is the organisation of independent Melanesian countries (Fiji, Papua New Guinea, Solomon Islands and Vanuatu) plus one political party, the pro-independence Front de Libération Nationale Kanak et Socialiste (FLNKS) from the French territory of New Caledonia.

The MSG now includes Indonesia as an associate member, added in 2015 when Indonesia became aware that the Melanesian countries wanted to offer some kind of membership to the United Liberation Movement for West Papua. On her visit to Melanesia in 2015, the Indonesian foreign minister Retno Marsudi declared that “Indonesia is home to more than 11 million Melanesians. So Indonesia is Melanesia and Melanesia is Indonesia. We share a common land border and culture with our next biggest Melanesian country, PNG.” Jakarta was soon writing handsome cheques for Melanesian governments.

The Pacific islands have been largely spared from the savage aid cuts made by Australia’s former Tony Abbott-led government, and foreign minister Julie Bishop has been adept at diplomacy in the islands, but Australian foreign policymakers need to adapt to the new reality of our nearest neighbours. Melanesia is becoming a region of many partners, expanding diplomatic options and a new sense of independence from Australia. The wider context of the new Melanesian assertiveness is one in which China is a rising power and Indonesia is forging closer links with the western Pacific.

Stewart Firth is a Research Fellow in the State, Society and Governance in Melanesia (SSGM) program at ANU. This post is based on George Carter and the author’s paper in Asia & the Pacific Policy Studies, The mood in Melanesia after the Regional Assistance Mission to Solomon Islands, and is a collaboration between Devpolicy and Policy Forum, Asia and the Pacific’s platform for public policy analysis, debate and discussion.