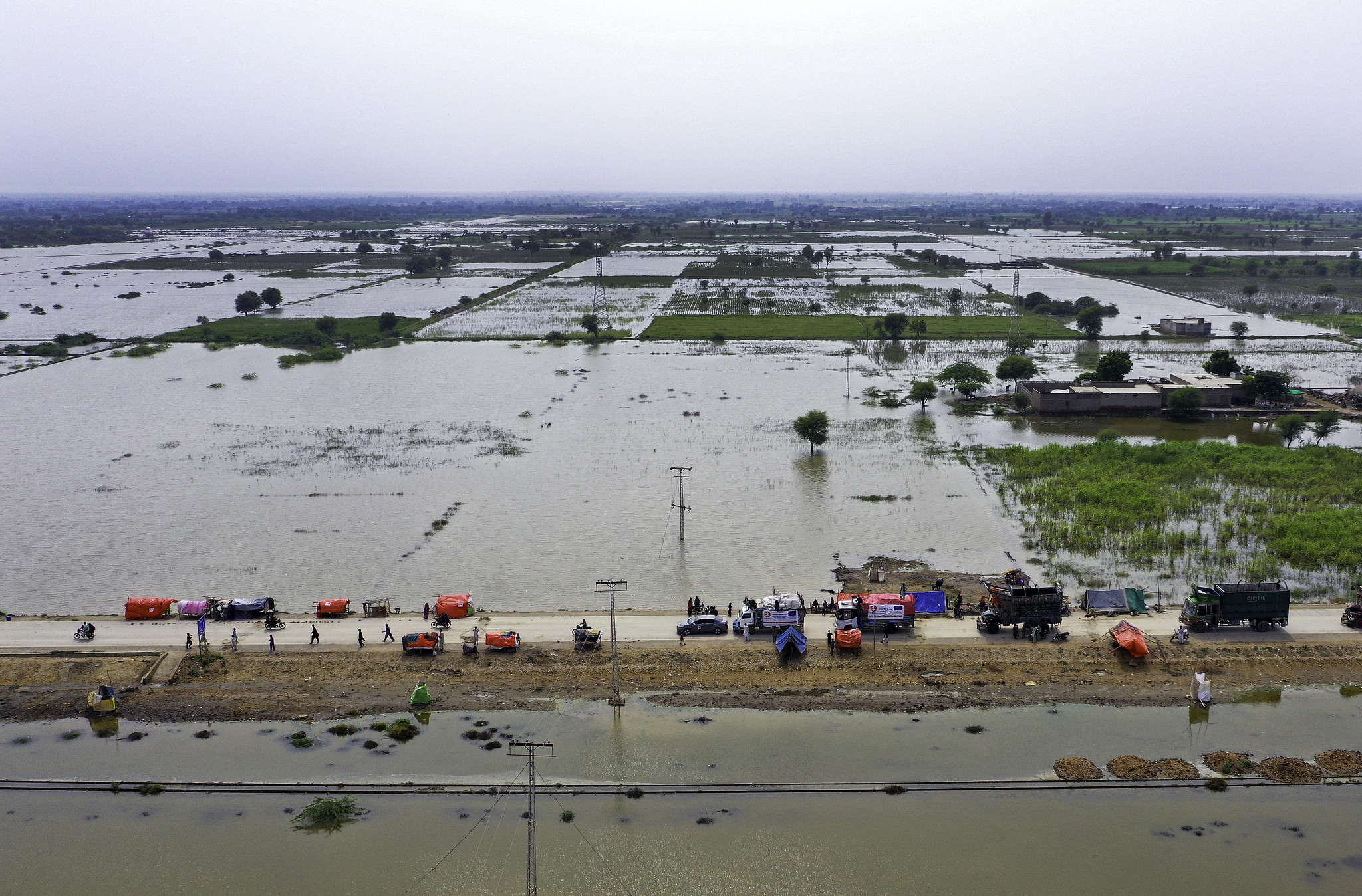 The “polycrisis” and global development finance: options and dilemmas

With a worsening hunger crisis spurred by food and fuel inflation, war in Europe, slowing global growth and rising debt distress, ongoing COVID-related supply chain disruptions, an unfolding climate change reckoning, and intensifying geopolitical fracturing, the notion of a “polycrisis” has well and truly entered the global lexicon. Popularised by the economic historian Adam Tooze, the term refers to “not just a situation where you face multiple crises, [but] a situation…where the whole is even more dangerous than the sum of the parts”.

Figure 1: A schematic of the polycrisis 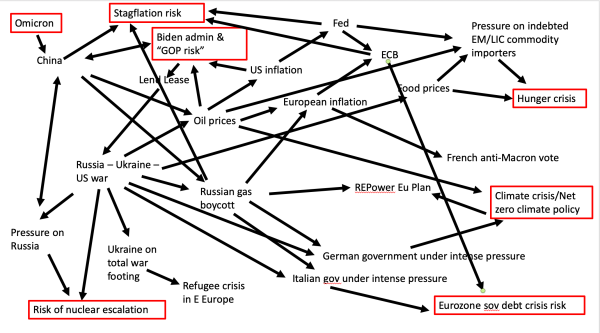 Source: A Tooze, Chartbook #130: Defining polycrisis – from crisis pictures to the crisis matrix.

In response, the last six months have seen an intensified focus on a range of proposals to reform the international development finance architecture in ways that might alleviate some of the worst effects of the multiple global shocks for low- and middle-income countries (LMICs). This blog canvasses several of the more prominent proposals, including the dilemmas and trade-offs they raise. As I have discussed official development assistance in a recent blog, the focus here is on debt, global reserves and the multilateral development banks (MDBs).

The first group of proposals concerns efforts to reform the global debt architecture in the face of the growing debt distress facing many developing countries, and rising risks of multiple sovereign debt defaults.

With the expiration of the Debt Service Suspension Initiative, put in place by Western Paris Club creditors at the start of the COVID-19 pandemic, attention has now turned to the G20’s Common Framework for Debt Treatments. The framework aims to help the world’s poorest countries “restructure their debt and deal with insolvency and protracted liquidity problems”. This includes increased efforts to engage with China – which now holds a large share of low-income country public debt but has been reluctant to negotiate with other creditors – as well as a complex array of private sector creditors who hold large amounts of emerging market debt.

Some specific reforms that have been canvassed include greater use of “collective action clauses” in sovereign bond issuances to bind more creditors into restructuring efforts, linking debt service obligations more closely to borrowers’ ability to repay through contingency arrangements, and requiring greater debt transparency from borrowers. But, to date, reforms have been limited and only three debtor countries have participated in the framework process so far – Zambia, Chad and Ethiopia. Of these, only Zambia looks like it will complete a debt restructuring deal.

The precise conditionalities that should accompany genuine debt relief, and the question of “who pays”, remain as difficult, if not more difficult, than ever. As well as the increased opacity and complexity of sovereign debt, the degree of difficulty has been made even harder by the West’s intermittent charges of “debt trap” diplomacy by Beijing, the associated widening of geopolitical fissures between the US and China (although China is participating in the Zambia deal), and the divisions within the G20 arising from Russia’s invasion of Ukraine.

A second, and perhaps more promising, set of reforms concerns the use of global reserves, specifically the “recycling” of Special Drawing Rights (SDRs) issued by the IMF, to help address short-term liquidity issues and prevent future crises in vulnerable LMICs. Following a G20 promise in 2021 to share US$100 billion worth of their additional SDRs with LMICs, to date around US$80 billion in SDRs has been committed to LMICs, mainly through IMF trust funds. China appears to support this effort, pledging an estimated US$13 billion in SDR recycling so far.

But, almost a year after the G20 pledge, not a single SDR recycled through the IMF had been used to benefit any LMIC. And the IMF is not publishing individual G20 member commitments, nor real-time disbursements from its trust funds. This makes it hard to compare “like with like”, and means that analysts and advocacy groups that track SDR recycling are forced to rely on divergent and often incomplete sources of information.

A potentially more useful (and transparent) way to recycle some of these reserves could be through MDBs like the World Bank and the Asian Development Bank. This arrangement could “provide the [much] needed link between the financial power of global reserves and the investment acumen of the MDBs”. It could also be used to support energy transitions in LMICs, and would allow the IMF to focus its attention on these countries’ balance of payments needs.

The trick here will be to devise a consensus among the IMF’s biggest shareholders over how to do this in a way that both preserves SDRs’ “reserve asset” status whilst freeing them up for development financing purposes. A simpler option could be transferring SDRs directly to vulnerable countries – Saudi Arabia, for example, appears to have transferred much of its additional SDR allocation to Egypt and Pakistan. But, again, transparency will need to be improved to ensure these commitments can be tracked.

A final set of reforms involves changes to the MDBs themselves. Indeed, rising commercial interest rates mean that developing economies are likely to see financing through the MDBs as more attractive than they would have just a couple of years ago.

One set of proposals that has arisen from a G20-commissioned review is for the MDBs to reform their capital adequacy and risk frameworks and utilise more of their callable capital to free up more resources for greater lending and investment in client countries, particularly in middle-income countries that are not eligible for highly concessional finance. According to the review, these and other changes to MDB policies would facilitate increased lending capacity within the next one to two years, potentially “amounting to several hundreds of billions of dollars over the medium term”.

Another, related reform option is increased MDB investment into global public goods – for example, pandemics, climate change, and biodiversity conservation. The new Financial Intermediary Fund for Pandemic Prevention, Preparedness and Response – established under the auspices of the World Bank – is an example.

Again, there are sticking points and trade-offs. Ratings agencies and shareholders have been lukewarm on proposals to revise the MDBs’ risk frameworks, arguing that it could imperil their AAA credit ratings and reduce their ability to raise capital on global financial markets. And MDB client countries are likely to resist efforts to channel more development funds into global public goods, arguing that it would divert finance from their national development priorities into areas that would partially benefit richer nations. In the case of climate change, many LMICs, including the Pacific countries, are more focused on securing additional direct finance through a “loss and damage” fund.

Australia, like all countries, is feeling the effects of the polycrisis, and has an important stake in an effective global response that addresses the particular vulnerabilities of developing countries. Even though Australia’s position will not be decisive in many of these global debates, it would be good to know where the government stands on these issues.

Indeed, there has been some significant activity, much of which has gone largely unnoticed. Australia is increasing its use of development loans in the Pacific, despite growing global concerns about debt sustainability. The Albanese government decided earlier this year to recycle over one-third of our SDR allocation (US$3.2 billion) through the IMF to support LMICs. Pacific countries have urged Australia to support the call for a climate loss and damage fund. And a DFAT review of development finance is due to report to the government by the end of the year.

A clear position statement at next week’s G20 leaders’ meeting in Indonesia could be a useful opportunity for the government to outline its priorities to our international partners, regional neighbours and an anxious domestic public as Australia seeks to define its global role in the era of the polycrisis.