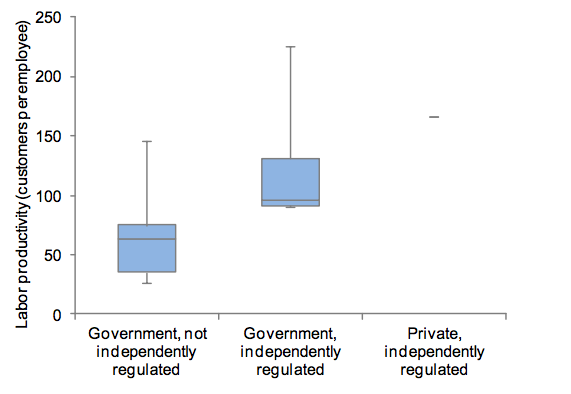 This blog summarises an article published in the latest issue [pdf] of the Pacific Economic Monitor. The analysis is based on data collected as part of a benchmarking study undertaken by the Pacific Power Association.

The reliable and affordable supply of electricity is critical for development. Power supply facilitates economic activity, enables the delivery of other infrastructure services (such as ICT), and contributes to the delivery of government services (including in the health and education sectors).

The quality and cost of power supplies is affected by regulatory and ownership arrangements in the electricity sector. These arrangements have changed in the last 30 years. In many countries, state-owned enterprises that had a monopoly over the generation, distribution and retailing of power now face competition, especially in the generation and retailing industries. In some countries, especially in Latin America, state-owned monopolies have been disbanded altogether or privatised. Results have varied [pdf], emphasising the importance of how reforms are designed and implemented.

Reform of the power sector in the Pacific has been limited, with electricity in the majority of Pacific island countries supplied by state-owned enterprises. Electricity prices in the Pacific are often politically determined. This can result in electricity prices that are below the cost of service provision, placing financial strain on power utilities that are consequently made reliant on the periodic (and ad hoc) injection of funds by government. Private sector participation in the region is also limited: there are only two private sector utilities in the Pacific, although private-sector generators are increasingly supplying power to state-owned utilities (often using renewable energy technologies).

There are a number of reasons why reforms have been of limited scope and success in the Pacific. One is the small size of electricity grids in the region. This presents a challenge to competition, with many grids being too small to support more than one power utility. Independent regulation of electricity prices can be difficult for the same reason, with the fixed costs involved in establishing an independent regulatory body outweighing corresponding benefits.

But there are cases of successful reform in Pacific island countries. In Fiji, a series of gradual steps since 2001 has seen the Fiji Electricity Authority (FEA) become one of the best performing utilities in the region, as reflected in the benchmarking survey. These changes were made possible by clear directives from government about commercial objectives and the appointment of a highly experienced management team. The implementation of independent price regulation in Fiji in recent years has enabled continuing improvement, with higher feed-in and retail tariffs facilitating investment in renewable energy technologies by the FEA and Independent Power Producers.

There has also been progress with the establishment of independent price regulation in the region. Independent regulators are now in place in countries such as Vanuatu, Tonga and Fiji. The regulators are often responsible for more than one infrastructure sector, and outsource specialised functions for tariff determination where required. These arrangements are a means of addressing the challenges presented by small size. The changes look promising: the removal of political influence over electricity tariffs is resulting in improved service delivery, while “life-line tariffs” ensure that electricity remains affordable for low-income households.

The results of the 2011 Pacific power benchmarking survey clearly show that utilities operating under independent price regulation perform better than those where prices are set by government (whether directly, or through government influence over utility management/boards). The two private sector utilities which also operate under independent price regulation perform very well. The two graphs below illustrate this using measures of labour productivity and financial performance.

There are two explanations for the difference in performance (ignoring issues of causality, which we won’t discuss here). First, the managers of utilities operating under independent price regulation are likely to have clear commercial objectives for which they are accountable (leading to higher productivity and financial performance). Second, tariffs set or influenced by politicians are likely to be lower, given political imperatives. Indeed, the survey shows that the average Pacific utility operating under government regulation records a negative return on equity of almost 5%. 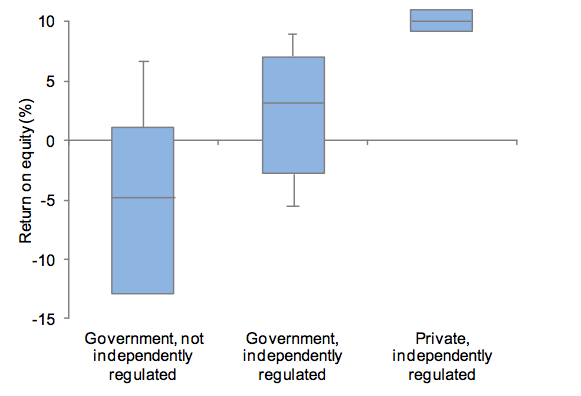 Poor financial performance reduces the ability of a utility to operate and maintain its equipment effectively. A forthcoming Pacific Region Infrastructure Facility study we co-authored on infrastructure maintenance in the Pacific has found that under-resourcing of maintenance is a significant factor behind poor quality infrastructure services in the region. The impact of regulatory and ownership arrangements on transmission and distribution losses – a key technical performance indicator – is shown in the graph below. Losses are lower where prices are set by an independent regulator. Power utilities operating in this regulatory environment are likely to be in a better financial position and have incentives in place to ensure high quality power supply. These arguments are also supported by data on the fuel efficiency of oil-based generators, which provide an indication of how well a utility operates and maintains its generation capacity. 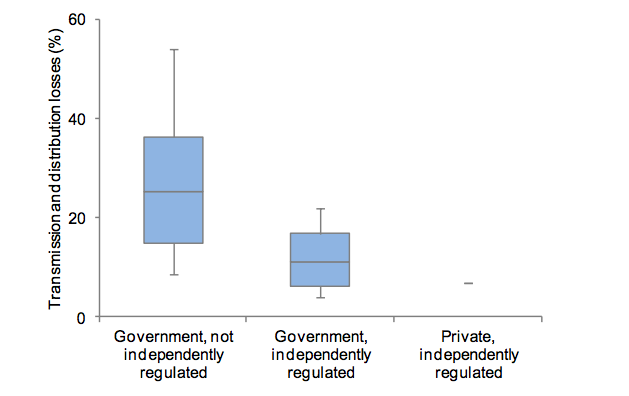 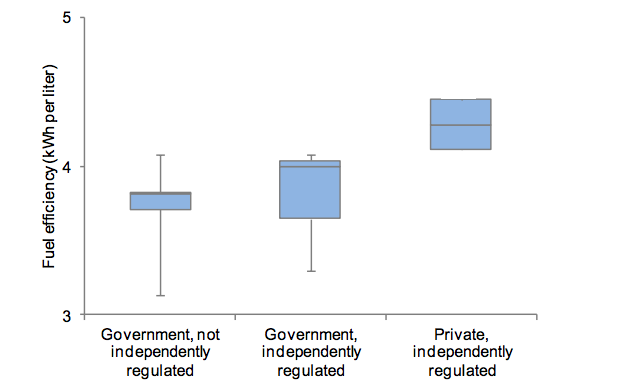 The problems presented by political involvement in the power sector are well recognised around the world. This article presents data from the Pacific which shows that the introduction of independent price regulation, which is normally accompanied by the establishment of commercial objectives, has a positive impact on the technical and financial performance of power utilities.

It is worth noting that independent price regulation is a modest reform when compared to reforms implemented in many developed countries. But it appears that such reform, however modest, does make a significant difference for performance. Independent regulation is also more feasible for small economies than ‘advanced’ reforms such as establishment of wholesale markets, especially when involving a multi-sector regulator that draws on outside expertise.

Further research is required to establish whether the multi-sector regulator model is cost effective for micro-states in the region, and whether regional approaches in these countries are feasible or desirable.