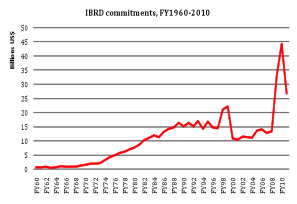 The founding institution within the World Bank Group is the International Bank for Reconstruction and Development. The only part of the institution that was established by the 1944 Bretton Woods conference, the IBRD is the World Bank’s bank. Importantly, the IBRD is not an aid agency. It borrows on global capital markets – cheaply because of its triple-A credit rating – and passes on the funds, at these cheap but commercial rates, to its member developing countries. IDA (the International Development Agency) is the World Bank’s aid arm: it was created later, in 1960, and gets its funds from rich country tax-payers rather than the capital market.

The IBRD started small, but expanded rapidly in the seventies under President McNamara. There was another surge in the eighties as the Bank started to provide budget support or adjustment lending. But total commitments reached $15 billion in the mid-eighties, and then stopped growing. The average for 2006-08 was about $13.5 billion.

Stagnant lending in nominal terms meant declining lending in real terms. In the context of a globalizing world – with massive increases in everything from remittances to international capital flows and from exports to the size of developing country economies – it meant a less relevant and influential World Bank.

This in turn led to the widespread conclusion that the future of the World Bank was not as a bank. The World Bank, it was argued, needed to expand its role as an aid agency, a global problem solver, or a multilateral think-tank (a knowledge bank), or some combination of all three.

But not as a bank.  The World Bank’s banking role was seen as a legacy from the past rather than a priority for the future.  In 2007, leading US development commentators Nancy Birdsall and Arvind Subramanian argued that the World Bank should become “a more reluctant lender to governments.”  Jessica Einhorn, writing in Foreign Policy in 2006, went further, proposing that the IBRD should be shut down.

Of course the World Bank always lends more in a crisis, as do all of the international financial institutions. Lending from the IMF and the Asian Development Bank, for example, is also up sharply. But the rapid expansion this time round can hardly be satisfactorily explained solely in terms of the Global Financial Crisis. A comparison with the Asian Financial Crisis of the late nineties is telling. Then IBRD lending also went up but only from that historic average of $15 billion to about $22 billion for a couple of years before falling back to average levels. More tellingly, this comparatively small and temporary increase was all in quick disbursing budget support. Project lending, the IBRD’s traditional fare, in fact continued to decline throughout the Asian Financial Crisis, falling in 1999 to about $7 billion – the lowest since the mid-seventies.

This time around is very different. Not only is the total increase much bigger (a tripling rather than a 50% increase), but project lending has also gone up dramatically, from $9 billion in 2007-08 to $24 billion in 2009-10 and $17 billion in 2010-11. This suggests a deeper role for the IBRD than simply the provision of liquidity.

What is going on? One obvious explanation is that the IBRD can lend more. It has recently benefited from a general capital increase, the first in over 20 years. The more capital reserves the IBRD has from its members, the more it can borrow and lend.  The developed countries have also encouraged the IBRD to lend as part of a global stimulus strategy.

And developing countries, this time round, are in a better position to borrow. Finding it more difficult to raise private capital, they have turned to the IBRD both for short-term cash and longer-term projects.

Another explanation are the reforms put in place by the World Bank to make it a more attractive source of funds. In the last few years, it has embarked on an effort to reduce transaction costs, as well as margins to borrowers. The World Bank has also shifted power in its governance structure from developed to developing countries.

Perhaps the ideological pendulum has also swung. In the 1990s, public-sector lending for infrastructure was seen as passé, and something which should be the domain of the private sector. No longer.

Another deep change is the adoption by the G20 of the IMF and World Bank. The G20 doesn’t have its own secretariat, and the IMF and the World Bank end up doing a lot of the background work for it. A significant part of the G20’s deliberations are also addressed to multilateral issues. For example, the G20 has driven the recent governance reforms at the World Bank, and also the capital increase.

It is quite remarkable that these two institutions of the old world order, the World Bank and the IMF, the so-called Bretton Woods twins, should now be adopted by the emblematic institution of the new world order, the G20. This must give them a new energy, and a new legitimacy.

It remains to be seen if the recent increase in lending will be sustained. There are also risks. The big scale-up of lending under McNamara came at the cost of quality. But there is also a strong argument that a diminishing role as a borrowing and lending institution was making the World Bank much less relevant to its clients.  Yes, the World Bank has a number of other important functions, from aid agency to think tank, but so do the UN agencies. It is arguably its ability to combine its intellectual firepower with a lending role that gives the World Bank its unique character. From this perspective, the recent revival of the IBRD, the World Bank’s bank, is to be welcomed.

For other recent Devpolicy blogs on the World Bank, see the original blog by Jonathan Cornford of Manna Gum, the commentary by Matt Morris of  the Development Policy Centre, and the response from Rob Jauncey from the World Bank Sydney Office.