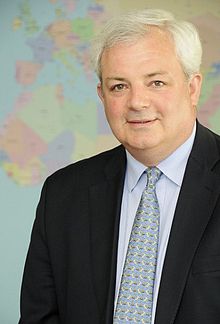 Stephen O’Brien has been a Member of Parliament in the United Kingdom for nearly 15 years. For two and a half years from 2010 he was a development minister in the Department for International Development. He is currently the UK Prime Minister’s envoy to the Sahel. A few weeks ago Jonathan Pryke sat down with Stephen, who was visiting Canberra in his capacity as the Global Advocate for the Roll back Malaria Partnership (RMP), an area in which he has had a personal passion for more than 30 years. A podcast of their conversation can be found here and a transcript here. For a summary of the conversation, read on …

Stephen O’Brien is Global Advocate for the Rollback Malaria Partnership, which acts as “a principal uniting and coordinating mechanism globally” for the efforts against malaria. Launched in 1998 by WHO, UNICEF, UNDP and the World Bank in an effort to coordinate global response to the disease, the RMP now has more than 500 partners.  What is the distinction between RMP and other organisations such as the Global Fund?

The Rollback Malaria partnership is ultimately about having a plan. There is a global plan, which is being refreshed, that has a clarity of approach where we know the interventions which work and will work first time; meaning people can have confidence that if they get behind this campaign, they are going to have real impact.

While the Global Fund is effective in mobilising finance for neglected diseases and leveraging those funds through effective implementing mechanisms, the RMP focuses on coordination of Malaria initiatives at a broader level, and ensuring all donors are working to the same plan and in the same direction. All very good, but does a focus on specific diseases such as malaria detract from broader health system strengthening — key for fighting all disease?

So, if you do agree with the moral component, great, we are getting on with it. If not, then it has by far one of the greatest proofs of a deliverable impact. So, if you bought money and resources in — great expertise, commitment, and sustained political will — you will get saved lives and improving lives out at the other end. That is a public good which is worth going for. It is easy to say it, but I become more and more convinced.

Another appealing aspect of the fight against malaria is its attractiveness to taxpayers:

When you have got an electorate to face, you have to justify the use of their money and what you are doing in their name. And the one thing that you can say about malaria control, whether it is in the Asia Pacific, the tropics that relate to that area of the world or Sub-Saharan Africa, or even in Central and Southern America, you know that because of the huge amount of expertise and experience that the ability to save lives and to produce a result in malaria control is going to be a genuine use of taxpayers’ money that has achievable impact.

Turning the conversation to our region, Mr O’Brien had just visited Papua New Guinea and seen firsthand the work that Oil Search is doing in providing frontline services for the treatment and prevention of malaria in very remote communities. He was impressed with this engagement of the private sector:

I am really pleased to see that the commitment to trying to get the private sector as a true partner in all these things is very much front and centre.

But what role can Australia play? The Asia Pacific Leaders Malaria Alliance was jointly initiated by the prime ministers of Australia and Vietnam to “help build the political commitment and accelerate action to combat malaria”. The ADB hosts the Secretariat, but it is still early days for the APLMA:

I think that the APLMA … is a very good initiative. It needs now to really motor, to get moving on that. I think it does need strong buy in.

I left our conversation reminded that malaria is a huge aid success story. Between 2000 and 2012 the global malaria mortality rate was reduced by 42%, saving an estimated 3.3 million lives. What are the reasons behind this success? Mr O’Brien noted that “clearly the world has woken up” with funding levels for malaria and other neglected diseases soaring in the past decade. He also said:

… a combination of scientists, of practical deliverers, of a rising amount of interest in competence in the third sector in the NGOs, but I think it is fair to claim that … at an international coordinated level — be it through the Global Fund or through prioritizing public health interventions in the MDGs up to 2015 (and already the secretary general of the UN, Ban Ki-moon, has declared that malaria will be included in the post-2015 successor to the MDGs) — these are big, public goods which can be achieved.

Stephen O’Brien MP is a Member of Parliament in the United Kingdom and Global Advocate for the Rollback Malaria Partnership. Jonathan Pryke is a Research Officer at the Development Policy Centre.

Stephen O’Brien MP is a Member of Parliament in the United Kingdom and Global Advocate for the Roll back Malaria Partnership.