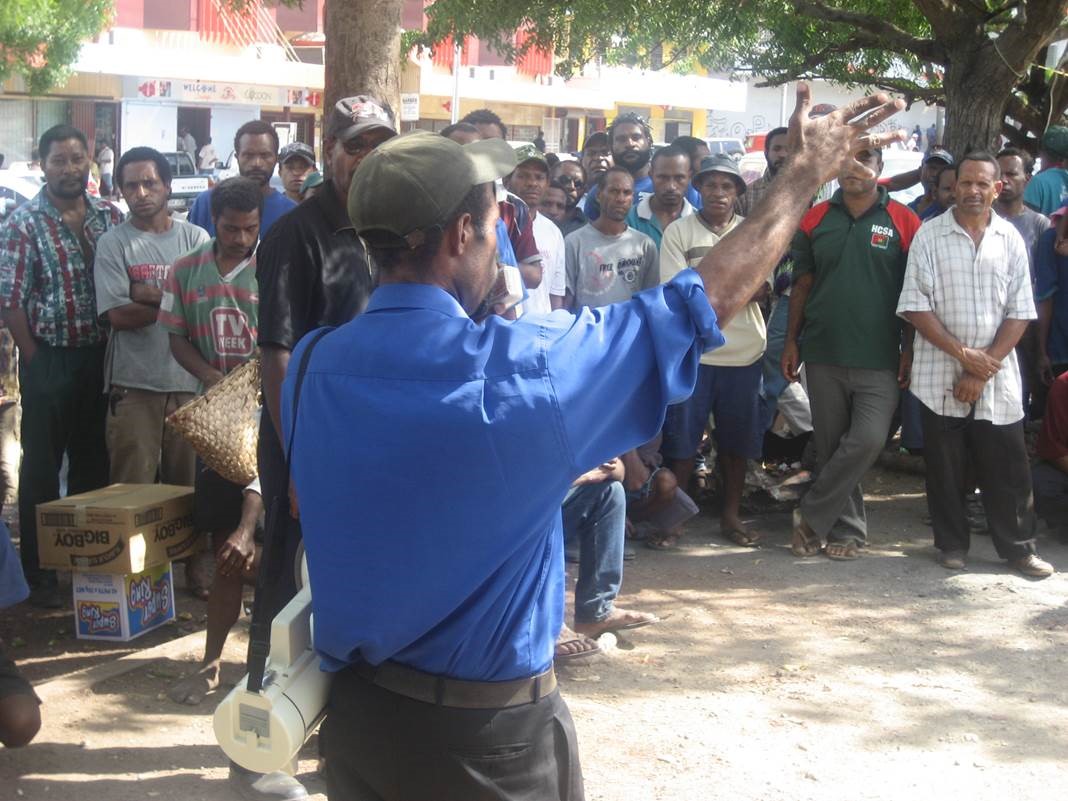 While organised ‘civil society’ is relatively weak, Papua New Guinea has a long history of anti-corruption activism. The churches, unions, landowner groups, students as well as local and international NGOs have all been involved in fighting abuses of power. And there has been some success. In 1997, concerns about corruption fuelled protest towards the government’s attempt to bring in mercenaries to fight the civil war in Bougainville, which became known as the Sandline Affair. This led to the resignation of the then prime minister Sir Julius Chan. In 2005 a Community Coalition Against Corruption (including NGOs like Transparency International PNG and the churches) helped scupper two parliamentary bills aimed at reducing the power of the Ombudsman Commission and increasing Members of Parliament’s constituency funds. They collected tens of thousands of signatures, which were presented to parliament. (This only temporarily stopped the rise of discretionary funding as these funds have grown exponentially since 2013).

The propensity for citizens to resist corruption should have increased since these success stories, as access to the internet has spread throughout the country. Citizens are now better informed about alleged corruption than ever before. However, questions remain about the willingness of citizens to en masse protest the country’s many corruption scandals.

My research with anti-corruption activists in Port Moresby suggests this is because the PNG state is still central to shaping citizens’ responses to corruption. The state of PNG sometimes expresses its growing power through threat and violence. Anti-corruption activists are threatened by the police, have had their protests forcibly broken up, and have been assaulted. The renowned anti-corruption activist Noel Anjo Kolao has accused the then prime minister, Sir Michael Somare, of kidnapping and physically assaulting him in 2010. Fighting corruption is still a dangerous occupation.

Yet there are signs that it is the state’s soft power that is even more effective in quelling dissent. PNG has a history of activists running for political office, and getting into power can significantly disrupt their movements. This occurred after the Sandline Affair when those associated with civil society organisations protesting against the government got into power. Civil society leaders helped the allegedly corrupt Bill Skate become prime minister and thus lost credibility with their supporters. The once radical NGO, Melanesian Solidarity – who were at the forefront of the Sandline Affair – effectively folded once their leader, the current Governor of NCD, Powes Parkop, was elected in the 2007 election.

The ability of the state’s soft power to shape anti-corruption protest has changed little. In October 2015 anti-corruption activist Noel Anjo Kolao called for a public protest against corruption allegations involving Prime Minister Peter O’Neill. While Kolao said there was “huge support” for the campaign on social media, few turned up. This is likely because Kolao has been aligned to once opposition leader Belden Namah, and has himself run for political office – in 2012 for the seat of Moresby North West, which he lost. Running for politics is common among PNG community leaders. Anthropologist Ivo Syndicus has suggested that students at the University of Goroka protested against corruption to help their political careers.

As described here, many development actors marginalise ‘politically compromised’ activists. Officially at least, numerous leading anti-corruption organisations, such as Transparency International, promote themselves as politically non-partisan. As a result, scholars and practitioners worry that politicised activism is a barrier to effective anti-corruption movements.

In the case of PNG, the connections that some civil society activists have with political elites has made many suspicious of their intentions. Yet, these seemingly ‘politically compromised’ activists can challenge political power in ways that other more ‘legitimate’ actors cannot.

Indeed, in the late 2000s and early 2010s a group of anti-corruption activists known as the NGO and Civil Society Coalition, who were for a time led by Kolao, raised important concerns about political corruption. While other anti-corruption agencies took care not to ‘name names’, the Coalition informed citizens of allegations of corruption associated with the then Prime Minister Somare. By taking their message to the streets and getting bypassers to share their stories of corruption, they also gave voice to the grassroots in ways that other groups were unable or unwilling to.

Such politicised activists are important because they fill in for development actors who make claims about fighting corruption but are too timid to jump into the political fray. For example, when Prime Minister Peter O’Neill dodged an arrest warrant for corruption, and defunded Investigation Taskforce Sweep, Australia – despite its commitment to addressing corruption in PNG and elsewhere – was silent. In comparison, Noel Anjo Kolao organised protests, and helped citizens voice their disapproval with the O’Neill government.

PNG’s anti-corruption activists are connected to the state in various ways, which reduces their legitimacy in the eyes of some. In turn, their perceived politicisation reduces the potential for broader protest movements. However, it is important to note that these activists play an important role in raising awareness about political corruption.

The key threat to these movements is not the state’s hard power, but its soft power, expressed through the lure of political office. This means that more radical anti-corruption movements are likely to continue in PNG, at least for as long as their leadership can withstand the state’s political inducements.

Grant Walton is a Research Fellow with the Development Policy Centre. This is an edited version of a presentation given on 4 December 2015, hosted by ANU’s State Society and Governance in Melanesia (SSGM) Program. The full audio recording, along with talks from Duncan Green (Oxfam GB) and Colin Wiltshire (SSGM), is available here.