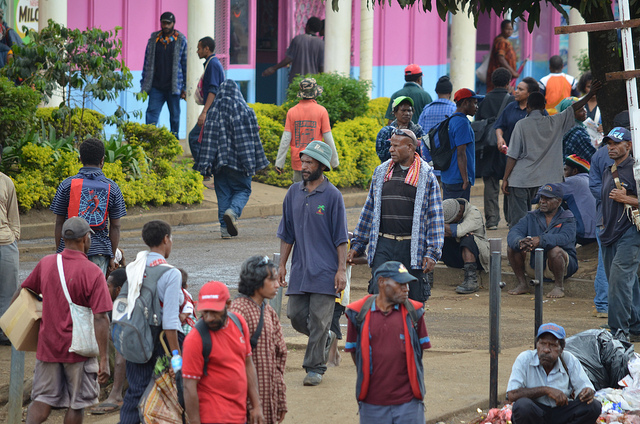 Nevertheless, students attending university in Papua New Guinea today continue to be groomed as a future ‘elite’ and ‘national leaders’ of the country, with intense competition for a chance to demonstrate one’s ‘leadership’ capacities in provincial student associations and student representative councils. Understanding the recent series of prolonged boycotts at the University of Goroka – in 2010, 2013, and very recently now in 2015 – indeed requires acknowledging the legacy of student politics in Papua New Guinea, and recognising that, rather than aiming to address issues relating to the university, the primary purpose of student leaders at the University of Goroka may instead be to establish their own platform for entering national politics.

The three prolonged student boycotts at the University of Goroka in recent years all displayed strikingly similar patterns, but also certain distinct features in comparison to recent boycotts at other Papua New Guinean public universities. For example, last year’s boycott at Unitech and the ongoing boycott at the University of Natural Resources and Environment. Some of these patterns and features (based on personal observations in 2010 and 2013, and that reports seem to confirm for the latest boycott as well) are:

The series of boycotts at the University of Goroka represent sophisticated regimes of student mobilisation and conduct aimed at the strict cohesion of the student body. Nothing seems able to break these regimes besides giving in to students’ demands or risking escalations that may mean unpredictable levels of violence and destruction, and/or the calling off of the academic year, none of which is in the interest of anyone concerned.

Giving in to the demands of students by temporarily suspending the Vice-Chancellor until a clearer picture is established, as was done in 2010, may appear to be the last straw of a pragmatic decision to ensure that the academic year proceeds, and to avoid further escalation, which may be unpredictable in magnitude. However, doing so is unlikely to be a workable solution as the strikes may be expected to continue in the years to come, given student leaders’ political aspirations and the opportunity that boycotts present to gain entry into the arena of national politics. The prolonged boycotts of 2010 and 2013 also indicated that once the threat of calling off the academic year is perceived to be sufficiently real, dissent grows among students and may lead to a confrontation of student leaders’ authority and an eventual return to normalcy.

It is surprising, then, to see the suspension of the university’s governing council for its alleged inability to take effective measures to contain and end the boycott. Rendering powerless any level of the university’s operations – from the governing body down to student welfare provision – is the primary, practical objective of these boycotts, with a view towards enforcing Ministerial intervention. When student boycotts are politically motivated rather than being primarily concerned with issues affecting the university (as these repeated boycotts at the University of Goroka appear to be), giving in to student leaders’ demands without clear grounds to do so may set precedents that confirm the boycotts as effective measures for furthering personal political aspirations.

One of the main questions for preventing these boycotts in future will be how to ensure the freedom of speech, movement, and decision-making by students residing in the university dormitories, and how to find ways to avert the establishment of regimes of comprehensive control over the university campus by a segment of students. The concentration of student dormitories at the University of Goroka within a small physical space, with mostly shared student rooms, provides a relatively easy environment to establish such regimes. There are of course broader problems with regimes that establish and maintain a certain order based on the threat of physical violence than the layout of the space in which they take place.

Another important way to undermine the relative ease of mobilisation of student boycotts for student leaders’ political aspirations would of course be to address the actual levels of discontent students experience in their university education. With the current levels of resources available and demands placed on universities, particularly at Papua New Guinea’s smaller but growing public universities, vice-chancellors alone have limited leeway to achieve this. So long as the actual grievances that students experience in relation to their university education remain, a sizeable number of students will be easily mobilised for boycotts that do not actually seek to address their issues.

Ivo Syndicus is a PhD Candidate at the Department of Anthropology, Maynooth University, researching higher education in Papua New Guinea. Ivo conducted 18 months of research primarily at the University of Goroka in 2013 and 2014, where he spent a year as student in 2010.

Ivo Syndicus is a PhD Candidate at the Department of Anthropology, Maynooth University, researching higher education in Papua New Guinea. Ivo conducted 18 months of research primarily at the University of Goroka in 2013 and 2014, where he spent a year as student in 2010.