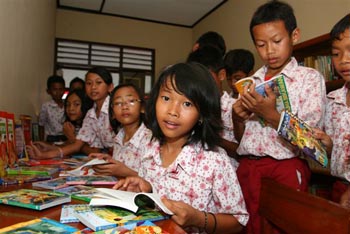 The Indonesia Update has occurred annually at the ANU for the last thirty years. This year there were 315 attendees for the two-day Update, which was held a week ago and had education as its special theme. Former Secretary of Australia’s Department of Foreign Affairs and Trade Richard Woolcott opened the Update’s proceedings for the third time with commentary on where he thought Australia-Indonesia relations were, and lamented the closure of the Indonesian language program at the University of New South Wales.

The economic and political updates followed. This year Paul Burke and Budy Resosodarmo of ANU’s Arndt Corden Division of Economics presented the economic update. They reviewed the mining and palm oil booms and its impact on living standards, as well as the underdeveloped (outside of Bali) tourism sector. The political update was given by Sandra Hamid of The Asia Foundation who argued Indonesia has successful elections. Associate Professor David Bourchier also expressed worries about Prabowo Subianto or Aburizal Bakrie gaining the Presidency in 2014. After these regular updates, the state of Indonesia’s education was addressed.

The first session was on policy directions to improve the quality of education. First to present was Fasli Jalal from Andalas University (Sumatra), and former Vice Minister of National Education. He identified methods for improving educational outcomes that didn’t require cultural change in the education system. He identified that improving capacity within school leadership as well as the school’s teaching staff through professional development programs would have a great impact on educational outcomes for students. Also he noted measures, such as ensuring the availability of up-to-date textbooks and technology for schools and having greater facilitation for students’ extracurricular activities, as simple methods for contributing to improving educational effectiveness. Finally, he advocated for greater support to be given to teachers through ensuring that local governments have the capacity to provide welfare for teachers and to incentivize reallocation of teachers to the archipelago’s more remote areas.

The next speaker was Chris Bjork from Vassar. His engaging talk addressed the notion that a culture of teaching anchored in obedience is the primary obstacle to reforming education in Indonesia. He advocated that reform policies should acknowledge this and address subsequent teacher identity and motivation issues. For readers of Devpolicy, Bjork’s presentation may have been an instance of Guthrie’s “progressive education fallacy”, the assumption that Western enquiry-based educational methods should be pursued in all countries, but it certainly gave interesting insights into just how different Indonesian educational practices are from, say, Australian.

Asep Suryahadi from the SMERU Research Institute, an independent Indonesian research and public policy studies institute, concluded the panel with a presentation on improving teacher quality and reducing absenteeism. He showed that the Government’s 2006 teacher certification program and increases in teachers’ salaries, while attracting more students to enter university to become teachers, have not had any impact on improving students’ performance in classrooms or reducing teacher absenteeism in urban or rural areas. He addressed these issues in relation to avoiding the middle-income trap, arguing that failure to reduce teacher absenteeism and improve teacher quality would contribute to Indonesia’s economic stagnation.

After lunch, Hal Hill of ANU and Thee Kian Wie of the Indonesian Institute of Sciences made a joint presentation on higher education. The challenges they discussed were: providing incentives for improved academic quality in teaching and research; the development of credible accreditation and quality control mechanisms; the need to expand educational opportunities for poorer areas; and university autonomy.

In the same session, Diastika Rahwidiati and Rivandra Royono from AusAID addressed the utopian aspirations of some Indonesian universities becoming ‘world class’, and suggested the need for support for tertiary education institutions that are small and relevant to local needs. They gave a presentation that highlighted their research on how to benchmark higher education institutions in non-ideal environments and the importance of what these institutions considered quality. They argued that the key for success for these institutions was making themselves relevant to local conditions and responding to local human resource needs in course offerings, and these should be the benchmarks for success, not ‘world class standardisation’.

Bruce Chapman concluded the first day with a talk on comparative higher education financing mechanisms. He highlighted that increasing access to universities in relation to the growing number of Indonesian’s completing secondary school was critical, and that this could be achieved through implementing a public financing for higher education mechanism. This is necessary because Indonesian banks wouldn’t finance loans without collateral (having collateral is obviously a problem for most potential Indonesian university students). Chapman presented various government financing mechanisms: full subsidies; mortgage loans from banks with guarantees by the government; and income contingent loan schemes like Australia’s.

The next day of the Update, Anies Baswedan of Paramadina University , gave a highly polished presentation on the Indonesia Mengajar program, of which he is the director. He outlined the philosophy of Indonesia Mengajar (sending high achieving graduates to rural areas for a year to teach), and gave some explanations for its success. The presentation brought many positive responses from members of the audience. I wondered what happens to the 19,000 applicants who want to become Mengajar teachers, but fail. Where does that enthusiasm go? Why can’t it be taken advantage of? Anies Baswedan interestingly said he wanted to avoid government involvement in the Indonesia Mengajar program, and for it to be an entirely civil-society/privately sponsored program so as to avoid being unnecessarily encumbered.

Jemma Parsons, a consultant for Cardno Emerging Markets who work with AusAID then spoke on integrating Madrasah into the national education system. She highlighted the problem of integrating Madrasahs into a decentralized education system. Challenges highlighted concerned administering public funding to Madrasah, and standardising the quality of teaching. Parsons argued these challenges needed to be critically examined to minimise the gap between the Ministry of Religious Affairs’ understanding of the integration process and reality.

Ninasapti Triaswati of the University of Indonesia, and Khong Kim Hoong of Help University (Malaysia) concluded the Update with their presentations on the promotion of educational quality and internationalising education, respectively. Triaswatire iterated many of the points that Fasli Jalal had made in his opening remarks. Khong Kim Hoong gave a narrative of foreign education institutions’ emergence in Malaysia. I think audience members were supposed to see that Indonesia could do the same thing as Malaysia (importing foreign universities).

I look forward to the Update book which should come out in a year’s time. In the meantime, I hope that draft papers and presentations are put online to keep the very vibrant discussion that the Update stimulated alive and well.

Colum Graham is a Researcher at the Development Policy Centre