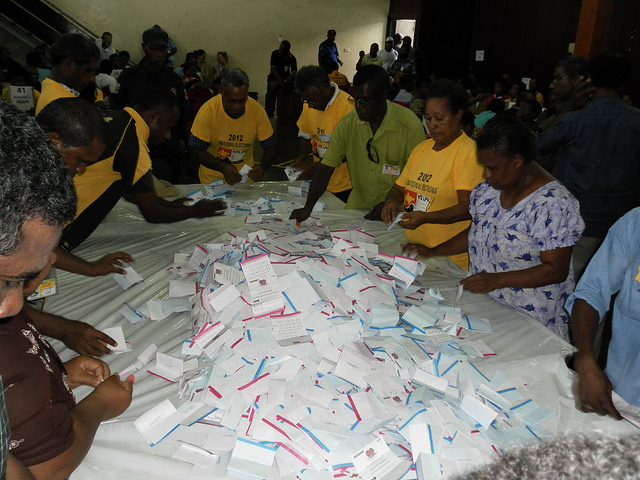 Elections are all about political economy. Obviously. Their outcomes dictate who governs and who makes laws. And the outcomes of elections are themselves influenced by the distribution of power in a country: who has money to pay for campaigning; who can use organisations to mobilise support. What’s less obvious though, and less well studied, is the link between matters of political economy and the conduct of elections.

In a recent Development Policy Centre discussion paper I look at how particular political economies influence the quality of elections in Solomon Islands and Papua New Guinea. Each country suffers electoral issues. But the extent of these issues varies significantly, both between the countries and within the countries too. There is also variation in how well different parts of the electoral process work. Vote counting is quite good in both countries, while the quality of polling station management is poor in some places and good in others. Meanwhile, on the periphery of elections, vote buying is ubiquitous, despite being illegal. And although each of the countries’ electoral commissions pull off the remarkable feat of managing the logistics of elections, despite the geographical challenges they face, they also suffer political neglect and underfunding, and struggle in areas such as roll maintenance.

In the paper I argue that three, interacting political economies explain the overall state of electoral quality in Solomon Islands and PNG, as well as much of the variation that exists.

The first political economy is a national one: because both countries are so ethnically and politically fragmented that there is no one political bloc or group able to capture the electoral process nationally and exclude minority groups, as happens in some countries, and this is very good news. Yet the two countries are also strongly clientelist polities, where voters almost never vote on national issues or on the quality of governance nationally. As a result there is no electoral incentive for politicians to tackle problems with the quality of elections. They won’t be punished by an angry public if elections are poorly run. Indeed, if elections are poorly run there’s actually a reasonable chance that sitting MPs will benefit: they are typically powerful and wealthy, which often affords them the ability to take advantage of lax electoral procedures within their electorates. Because of this politicians rarely push for better elections, and this leads to underfunded electoral commissions, which are not pressured to deliver results. In the paper I call this a political economy of malign neglect. Even though no one is actively trying to capture elections nationally, many politicians are happy to let the electoral process be run down, so that they can benefit locally.

The second political economy is an international one. Malign neglect would lead to worse elections still were it not for the countervailing force provided by aid donors who work in both countries to strengthen electoral commissions and help them run elections. This help has been crucial, but also constrained. As outside actors, donors are limited in what they can know about quieter forms of electoral maleficence, such as vote buying or fraud within polling stations. And because of the entropy that comes with the first political economy, aid funded improvements are typically not self-sustaining after assistance is withdrawn. Aid has helped but it cannot cure all of the countries’ electoral problems.

The third political economy is local. The national political economy of malign neglect, and the inability of aid donors to offset all of this, provides considerable space for local political actors to cheat if they can get away with it. And so a lot of cheating goes on. Yet sometimes there are checks on this — the most important example being the process of vote counting. In both Solomon Islands and PNG vote counting occurs in the more or less neutral territory of provincial capitals and candidates’ supporters are allowed to scrutinise counting, which makes cheating on the count hard.

My paper contains much more detail, but the takeaway points for aid policy are simple: don’t assume Solomon Islands’ and Papua New Guinea’s electoral problems can be cured with aid. There’s a strong national logic underpinning them and this cannot be fixed from without. Don’t give up on aid either though; it’s not a cure but it helps, and without it elections would be a lot worse. Also, importantly, when giving aid in the future, look for opportunities to promote and reinforce the local level checks and balances within the system that make cheating harder.