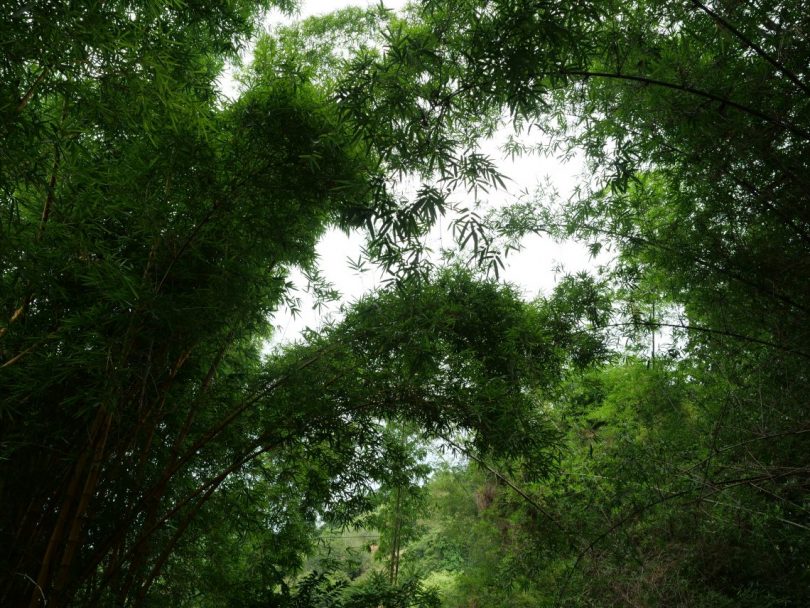 Bamboo is an amazingly versatile plant. Like timber it can be used for building homes and furniture, but is stronger and easier to produce. Like forests, bamboo groves can mitigate emissions and protect soil from erosion, but can grow to maturity in as little as five years.

Although used for a myriad of purposes throughout history, the bamboo industry seems to be having something of a moment – its market size globally was US$68.8 billion in 2018, a 5% increase on the previous year. For a country like Timor-Leste, which has issues with both deforestation and accessing cheap building materials, establishing a robust bamboo industry would have a lot of advantages.

This isn’t an entirely new idea. A 2018 report commissioned by the UNDP found that Timor-Leste had the potential to produce over 20 tonnes of bamboo per hectare. Given that China, the industry leader, averages 22 tonnes per hectare, this is significant.

So what is holding Timor-Leste back?

Bamboo cultivation has appeared in Timorese policy documents before, notably its 2011–2030 Strategic Plan which undertook to ‘develop a national bamboo policy and marketing strategy by 2015’. While this has not yet come to fruition, the concept is one that has been proven in Timor-Leste.

In 2008, as a result of a partnership between the United Nations Industrial Development Organization and the Timor-Leste government, an Instituto Do Bambu was established in Tibar near Dili. Sometimes referred to as the Bamboo Institute Tibar (BIT), it was initially intended to serve as a research centre; however, it has come to be involved in almost all aspects of the bamboo supply chain, and now operates as a thriving business in its own right.

BIT’s success could have been replicated across Timor-Leste but this has not occurred. Since its foundation, in the absence of any state bodies willing or able to coordinate the establishment of a bamboo industry, BIT has taken on a considerably expanded agenda, including hosting policymaking workshops and providing training in the practicalities of growing and working with bamboo. Despite these great efforts, BIT still lacks the appropriate resources to facilitate the expansion of the bamboo industry on a national scale.

Another issue relates to a much broader conundrum – land tenure. This is a complex and much contested matter across Melanesia. In Timor-Leste, lack of clarity here directly limits the potential of the bamboo industry, and large-scale agroforestry more broadly.

Timor-Leste’s rugged countryside is divided into innumerable smallholdings, often held under customary tenure. In more settled areas, people claim land under Portuguese or Indonesian-era title, and there is also widespread squatting of land that was abandoned by the Indonesian state in 1999 that now belongs to the national government. All of this makes it very difficult for the ‘BIT centre’ concept to be rolled out nationally. To secure micro-loans, farmers need to have recognised land titles, and investors need reason to believe they will be able to secure a return. This is not possible if the ownership of the land is contested or otherwise unclear.

Finally there is the widespread perception in Timor-Leste that bamboo is a ‘poor man’s timber’. Historically, in its unprocessed form, it has been a mainstay of rural life, used for fencing, crafting agricultural and household goods, and building houses. Those who have money often spend it on imported timber as a way of distinguishing themselves from the poor. At present, the products produced by BIT are mostly sold to foreign aid workers and government offices. Especially given that bamboo is not considered a high-status material, prices for these products remain too high for the general population.

We have a number of suggestions as to how this situation might be addressed.

First, a central whole-of-government taskforce could be created to oversee the development of a bamboo industry across Timor-Leste, in keeping with the existing national Strategic Plan. There is scope for BIT to be involved in this directly and a range of lessons to be learned from their successful operation as a hub for bamboo-related policy and technology.

Second, there is a clear place in the market for sustainable, high-tensile, durable and affordable building material that is produced locally. With the exception of remote areas where people still often build using whatever they can gather, construction materials in Timor tend to be of low quality – mostly imported from Indonesia or China. Homes often have concrete or brick walls and are roofed with cheap sheet metal. Buildings constructed with such materials are perceived as being ‘modern’, ‘permanent’, ‘convenient’ and more prestigious, despite higher operational and embodied energy costs, and indeed being much hotter.

As a first step to showcasing bamboo’s potential, a series of demonstration projects in rural and urban areas would be useful. Government buildings, schools, and housing projects are all spaces in which this could be done, increasing awareness of the bamboo industry in a way that could lay the foundation for the later establishment of bamboo farms and processing facilities. Introductory training could also be offered to help people understand bamboo’s possibilities as a construction material and how they might work with it. 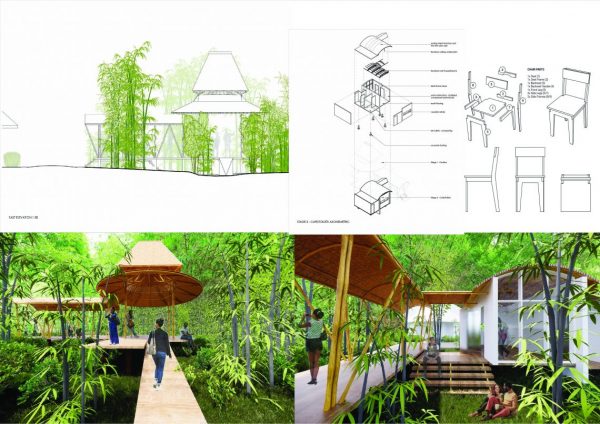 Bamboo is a highly versatile material and can be used for both construction and furniture. Perspective views of Café Uma pavilion proposal and UmaChair design for Bamboo Institute Tibar, Timor-Leste. All designs by BBM Design Lab, 2020 (BBM Design Lab)

Third, aside from local use, bamboo also has potential as an export product. If current trends continue, demand for bamboo products will only increase in coming decades. While it is true that Timor-Leste is not equipped yet to manufacture value-added products on a large scale, there is a market for preprocessed products that have been resourced sustainably. The BIT model suggests that with the right policies, scaling up bamboo production and manufacturing for export in a socially and environmentally responsible way is entirely possible.

Timor’s political leaders have spoken about diversifying their economy and decreasing their reliance on non-renewables and imports for decades. Government support for establishing a bamboo industry is one way of starting to make this happen, and laying the foundation for the sort of circular economic development that will benefit everyone.

Dr Rosangela Tenorio is co-founder of the Bio-based Materials Design Lab and an Associate Professor of Architecture at the School of Design, University of Western Australia. Rosangela is committed to affordability of resources and has been working with design for development and environmental design in tropical regions for over 20 years.

Dr Jairo da Costa Junior is co-founder of the Bio-based Materials Design Lab. Jairo has over 10-years’ experience on design for sustainability, which has been mostly dedicated to initiatives aiming at accelerating the transition to a systemic and circular perspective in design education and practice.