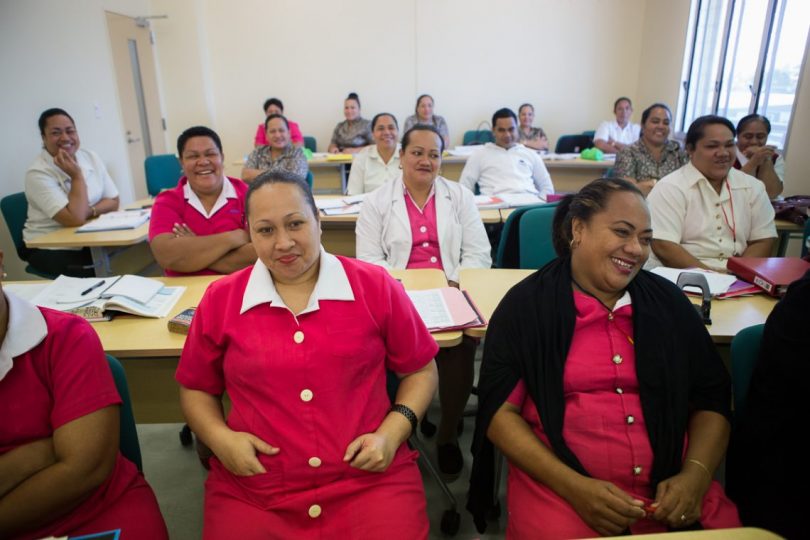 Nurses per capita have grown much faster than population in many Pacific countries (Credit: DFAT/Flickr CC BY 2.0)

It is almost the tenth birthday of the article “Think Again: Brain Drain”, where Michael Clemens and David McKenzie – two of the best migration researchers – work through common concerns around the so-called “brain drain”. As much as I wish this were just a birthday celebration, most of the concerns discussed by Clemens and McKenzie persist today. It is thus worth circling back, taking stock of what has changed since, and thinking about how the arguments and evidence offered there remain relevant. In this first of three posts on this topic, I sketch out how one might think about brain drain in the context of Pacific labour mobility. Like them, I’ll do this by spelling out some key assumptions underpinning the idea of a brain drain. Why? Brain drain is essentially a theory, a theory that migration opportunities leave the domestic economy worse off due to skill depletion. Theories rely on assumptions, which we can and should be clear about. When assumptions break down, so often do the theory’s predictions.

The first assumption, which is at the heart of the brain drain theory and which Clemens and McKenzie highlight, is that migrant sending countries have a finite stock of skilled workers: when people leave, (a) they are never coming back, (b) people cannot immediately fill their shoes, and (c) they are not getting replaced. The supply of skilled workers must be, as economists say, perfectly inelastic. This assumption is mechanically true in the short-run: if one trained nurse leaves Kiribati today for the Whitsundays (even if they are coming back due to the visa rules), there is one less trained nurse in Kiribati tomorrow. As time passes, this assumption weakens. In many Pacific economies there are fewer jobs than there are people willing and trained to work them, so it is not implausible that the nurse’s job may be filled by another nursing graduate who otherwise could not find a job. With fewer skilled workers, wages might rise for those remaining. Responding to the higher domestic wages or the opportunity to work abroad, more people might pursue nursing degrees. This is known as the “migration prospect” effect (more on this in the next post). Despite massive out-migration, the Philippines have more nurses per capita at home than the UK. Nurses per capita have grown much faster than population in many Pacific countries too, including Fiji and Kiribati.

A second assumption required to make us worry about brain drain is a highly elastic behavioural response to wages in other countries. This just means that if wages are higher abroad and people can physically move, they will. The fact that most migration programs are oversubscribed suggests this assumption usually holds. So does the place premium, the additional wage premium that you can get working in the same industry with the same education or skills in a different country (more here). Differences in wages for unskilled workers in low and high income countries also tend to be large, in no small part due to differences in employment standards and in particular minimum wages. Behavioural responses and place premiums are important because together they imply large welfare gains when people are afforded more freedom to choose where to live and work. When it comes to thinking about and responding to concerns over a potential brain drain, one should not disregard the fact that migrants, through their own free will, are acting to improve their lives. To knowingly make someone worse off, the evidentiary bar is necessarily high. Plus, this assumption need not always hold, at least not all the time for everyone. People care about more than income, not everyone migrates when given the chance, and people often return home anyway.

A third assumption behind fears about brain drain is simply that migrants do not generate ancillary domestic benefits. Place premiums see migrant wages increase as much as five-fold. Most people send or take money home. Although skilled migrants, particularly from poorer countries, are most likely to remit, industry awards in Australia are high enough to see temporary migrants in lower-skilled jobs still remitting significant amounts home to support their families and communities. Remittance levels are highly variable but sending back just one fifth of earnings can represent a net gain. And recall that remittances account for up to 45% of Pacific GDPs and a non-trivial share is spent on education – that is, more brains.

Although there are many more, I think those three assumptions are important building blocks for thinking in a structured way about the brain drain. What they make clear – and what is essentially the message of the Clemens-McKenzie argument – is that brain drain should not be the default belief, nor should one think that it can never occur. Generally speaking, when one assumption breaks down (for example, remittances flow and are invested in education), it must be more than offset somewhere else (for example, less people enroll or more people leave) for concerns about brain drain to remain valid. And timing is crucial, as countries like China and India – where there was great concern about brain drain for many years – have shown. In the short run, aggregate skill levels in sending countries decrease, skill prices may rise, and remittances are likely to flow to sending country households and government coffers. Over the medium to long term, skills might respond to rising prices or the opportunity to migrate, any impacts of remittance flows start to materialize, and people may return home. From a research perspective, these discrete components are helpful to structure thinking, measurement, and analysis. From a policy perspective, it is important to decide whether you are most concerned about the short or long run effects or any of these particular components, since they could behave differently.

I have not given too much attention to prior research here because Clemens and McKenzie, and the longer survey “Eight questions about brain drain” have you covered. But in the next post I’d like to share with you some really interesting new studies undertaken since then.

This blog is the first in a three-part series.