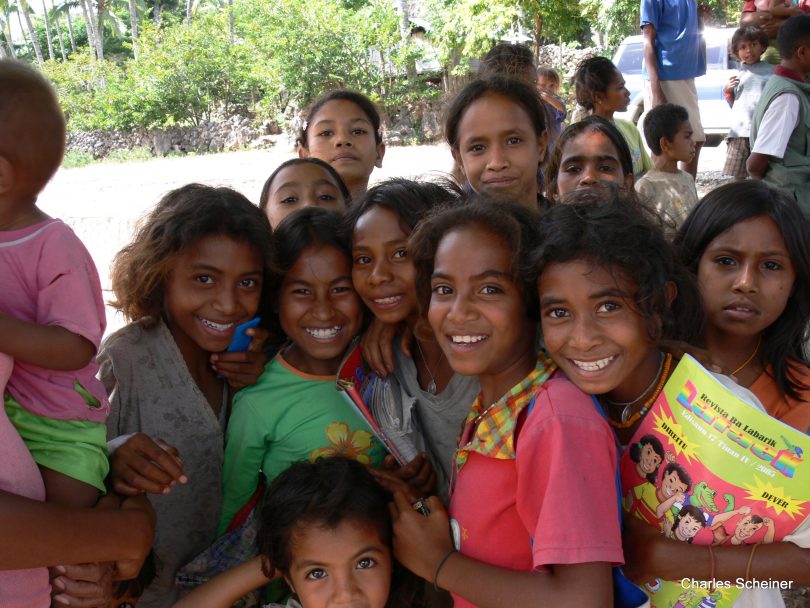 The majority of Timorese people are under 20, and their economic future is precarious (Charles Scheiner)

The young nation of Timor-Leste has been blessed with US$23 billion in oil and gas revenues over the last 15 years, which has paid for 86% of state activities. But that era is almost over, and exporting the remaining oil and gas can probably finance the government for only a year or two more. Even if the investments in its US$19 billion sovereign wealth fund (the Petroleum Fund) continue to do well, the country is more than halfway through the period when its non-renewable resource wealth can pay for public investment and services. The future is uncertain – and frightening.

As detailed in my article Timor-Leste economic survey: The end of petroleum income, the leaders of this peaceful, democratic country managed the inflow of petroleum revenue well, avoiding significant corruption, violence, criminality and unconstitutionality. Although they did far better than most newly independent, impoverished countries which rely on converting non-renewable resource wealth to cash, some negative consequences of oil dependency were unavoidable. The economy relies on imports, local production is minimal, jobs are scarce, and the urban middle and upper classes have enjoyed most of the benefits.

Much of the oil money has paid foreign companies to build large infrastructure projects, but the lives of the rural, agricultural majority have barely improved. Only a small fraction of petroleum revenue has been used to support people’s lives and future productivity – education, health care, child nutrition and rural water supply are little better than they were in the 1990s, the last years of the Indonesian military occupation. Most people continue to survive by subsistence farming, while private-sector employment has been declining since 2014. Economic diversification, although often discussed, has not happened. 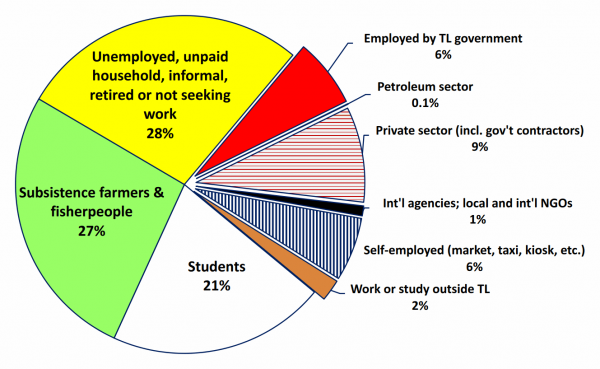 Policymakers still refer to the unrealistic, outdated, aspirational 2011 Strategic Development Plan, and believe that petroleum processing, shipping and aviation infrastructure, and foreign-owned resorts, mines and factories will lead to a more diverse economy. However, neither the history of these repeatedly delayed projects, nor their specifics, gives cause for optimism. Jobs, spin-off subcontracts and tax revenues from these projects will not be enough even to continue today’s economy, let alone to improve the lives of the 40% of families who live in poverty, or the majority of young children who endure malnutrition.

As the following graph shows, oil revenues have dropped drastically from their 2012 peak, and the returns from investing the Petroleum Fund vary from year to year, depending on volatile international financial markets. When the Petroleum Fund is empty, which could happen within a decade, investment returns will be zero. All that will remain is ‘domestic revenues’ – what the government collects from import duties, taxes, fees and other aspects of the non-oil economy – which have covered only 14% of state expenditures since 2014.

Sources of income for Timor-Leste’s government 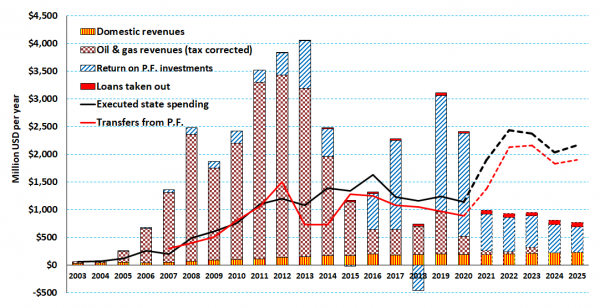 State spending, which has been fairly stable since 2014, is projected to increase markedly in the next few years. Unfortunately, most of it may not be invested in the country’s future. Although the government says that its priorities are education, health, water supply and agriculture, all together they will receive less than one-fifth of state spending in 2021.

Sectoral allocations in the US$2 billion state budget for 2021 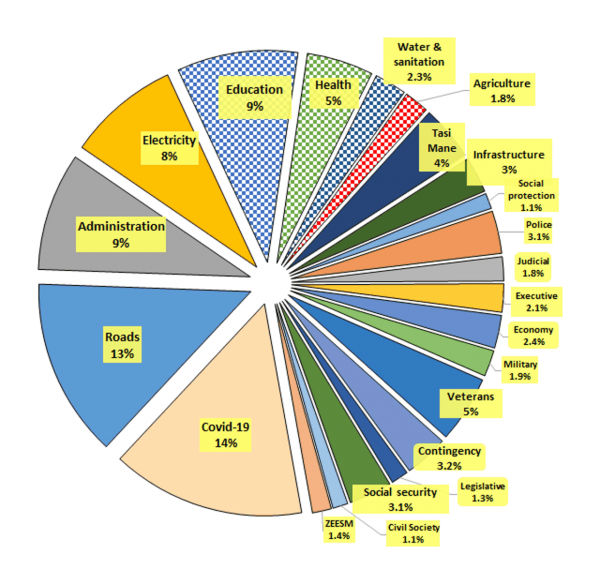 Many people, including most government officials, have internalised the dependency on oil and gas that has dominated the country’s post-occupation history. They find it hard to envision a post-oil economy, or to begin the challenging work of strengthening local food and other production. They avoid uncomfortable questions, such as how people will eat when the oil money which pays for food from overseas is gone.

The article from which this blog is derived tabulates potential revenues from Greater Sunrise and other future oil and gas projects, which politicians talk up but which, realistically, will provide less than one-tenth of the income that has been received from Bayu-Undan to date.

The urgency of changing vision and policy is inescapable. Although current leaders are in denial and don’t acknowledge or try to address these difficult challenges, a new generation of political leaders is coming. They were not conditioned by brutal occupation and the world-defying struggle for national independence, and have been more exposed to global trends and knowledge, which may help them move the economy in a more sustainable, equitable direction. Many of their articles and blogs already demonstrate this perspective; the biggest unknown is whether their power and influence will grow fast enough to take advantage of the remaining oil and gas wealth, to prepare for the next phase of Timor-Leste’s history.

Read Timor-Leste economic survey: The end of petroleum income in Asia & the Pacific Policy Studies journal. All articles in the journal are free to read and download.

Charles Scheiner is a solidarity activist from the USA. Since 2001, he has been a researcher at La’o Hamutuk, the Timor-Leste Institute for Development Monitoring and Analysis, where he investigates the impacts of petroleum extraction on Timor-Leste’s economy and politics.