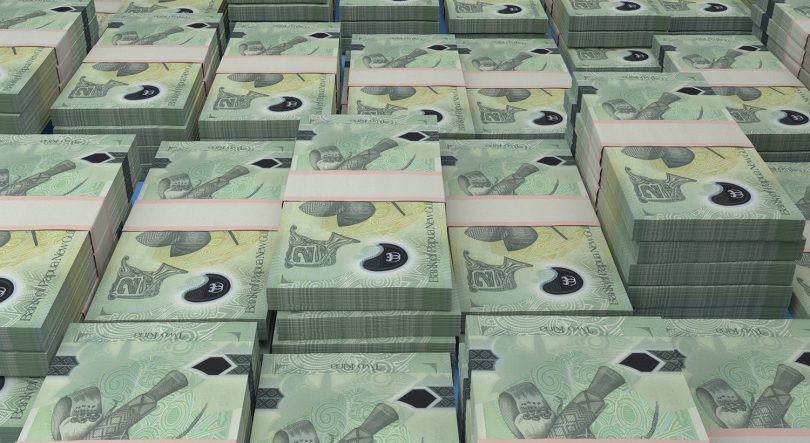 Papua New Guinea’s Sovereign Wealth Fund (SWF) has been a long time coming. Following the Mineral Resources Stabilization Fund, the infamous trust funds of the early 2000s, and an aborted attempt in 2011-12, PNG’s SWF was finally legislated into existence in 2015. The Organic Law on the Sovereign Wealth Fund 2015 envisages two funds: a main stabilisation fund to protect macroeconomic stability from volatile resource receipts; and a secondary savings fund to save some resource revenue for future generations.

Unfortunately, by the time this legislation was finally put in place, the resource boom of the 2000s was over. As resource prices slumped and revenues fell, actually establishing the SWF did not seem like a priority. The unfortunate consequence is that, now resource prices and revenues have increased, the SWF is not there to do its job.

PNG, like other petroleum exporters, has been a major beneficiary of the Ukraine-Russia war and resulting spike in oil prices. The 2022 Mid-Year Economic and Fiscal Outlook (MYEFO) estimates that resource revenues will be K3.8 billion this year, much higher than the budget estimate of K1.5 billion, and much higher than they have been over the last decade and since the end of the boom, even adjusting for inflation as Figure 1 does. 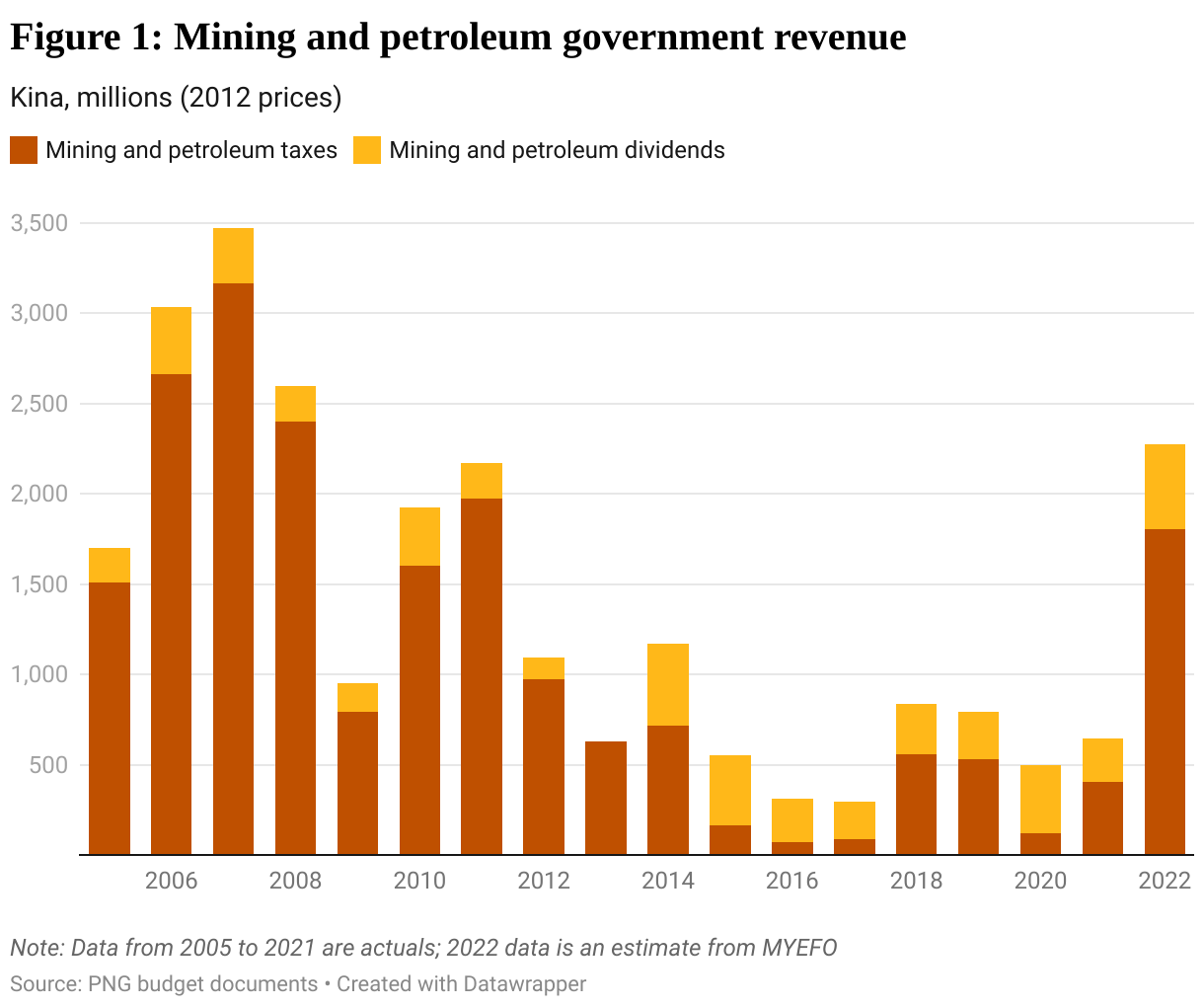 The Organic Law on the Sovereign Wealth Fund 2015 requires 50% of mining and petroleum tax revenues and 75% of dividends returned to government to be deposited into the stabilisation fund. In each fiscal year, a portion of these funds can be used as revenue, based on a legislated formula. The savings fund is to receive 25% of government dividends and any balance over USD1 billion from the stabilisation fund. Only real returns on the savings fund can be spent, and only after 2025.

Then there is the savings fund. It should have been accumulating 25% of dividends every year since 2016. That would be K198 million this year and an accumulated balance of K770 million if the legislation had been followed from the start, with nothing to be withdrawn until 2025.

Budget documents suggest that government receipts from the PNG LNG Project may increase from 2021 and accelerate significantly from 2025 as amortisation ends on the project’s loans and depreciation expenses fall (2022 Vol 1, pages 67-68). Establishing the SWF now would ensure it is ready in time to capitalise on anticipated resource revenue rises this decade.

Even if the 2022 windfall isn’t sustained, setting up the fund’s structures and starting to deposit and withdraw funds would still be worthwhile. After all, the law requires the SWF be established. It is not an option for the government. While it was understandable that the stabilisation fund was not established when it was just a case of ‘money-in, money-out’, that is no longer the case. And the savings fund should have been receiving funds ever since 2016.

A lot needs to be done to set up the SWF. As this year’s budget reminds us, there is recruitment for the SWF’s board, remuneration benchmarking, an investment mandate and the organisational structure. This work needs to get started. In the meantime, some of the resource revenue windfall could immediately be used for deficit reduction rather than, as the MYEFO proposes, it all be spent.

Of course, this is easier said than done. The government is running a massive structural deficit, has large arrears, and needs all the revenue it can get. Non-resource revenue has declined as a share of GDP and in per capita terms for 15 years, and pressure to spend remains high. However, none of these challenges is new or likely to recede any time soon. Now – when resource revenues are high and potentially increasing – is the best time for the SWF to get off the ground. So it was disappointing that the Treasurer didn’t even mention the SWF in the MYEFO, and instead said that all the additional revenue would go to additional expenditure, including not only arrears but also more funds for MPs.

More encouragingly, Prime Minister James Marape recently re-affirmed that the SWF would come into place in coming months, though it isn’t clear where Marape got the idea that 7% of dividends should go to the SWF: that isn’t in the legislation.

The 2015 SWF legislation was rushed through without much consultation, and a case can be made for its revision. Perhaps the government should be stricter on dividends being returned to it: at the moment, dividends are only directed to the SWF if Kumul Petroleum and Kumul Minerals remit rather than retain their profits. Perhaps the savings fund isn’t needed, and PNG should just focus on resource revenue smoothing. Perhaps the smoothing should be over a longer period than five years (15 years was used in the earlier legislation).

But while amendments could usefully be made, history suggests they may take a long time, and it would be a mistake to wait for them before implementing the SWF. Whatever the pros and cons of the precise model PNG has adopted, having legislation on the books and not implementing it sends a bad signal about governance and credibility.

Implementing the 2015 SWF legislation should be a top priority for the new Marape government. The ticking of the clock has just got a lot louder.

Note: A similar exercise to Figure 2 for the years 2012-21 was run in this year’s budget documents (2022 Vol 1, page 145) and produced slightly different numbers, but also showed that in earlier years deposits into were less than the maximum allowable withdrawals from the stabilisation fund.