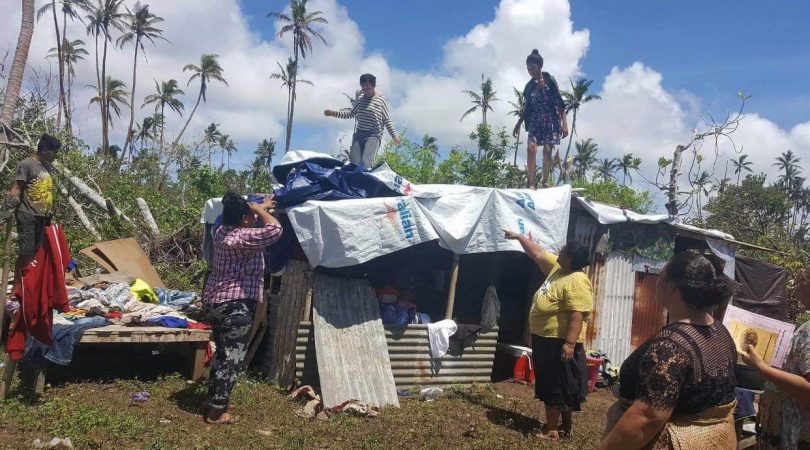 Whilst the world is dealing with the COVID-19 pandemic, there are countries across the globe that are undergoing a two-fold or double-whammy blow with the impacts of natural disasters also crashing in on their already fragile state.

Earlier this month, Tropical Cyclone (TC) Harold ripped through Vanuatu, Fiji and Tonga. TC Harold entered Tongan waters while the nation was in lockdown for COVID-19, in the early hours of the morning of 9 April. It hit mainly Tongatapu, ‘Eua and Ha’apai.

My immediate thoughts took me to the additional burden that would pile up on our women. Women were already having to deal with surplus demands from family members during lockdown: cooking, cleaning, washing, tending to the sick, helping children with homework, weaving to cover for pay cuts, calling for family prayers, managing family conflict, and so on. Now they were faced with having to deal with the unexpected arrival of TC Harold: facilitating the move to evacuation centres, preparing and cooking food for the family for the cyclone period, ensuring elderly and young members of the family were in safe locations. Not to mention its exit: immediately cleaning up, assessing damage, facilitating relocation of family members, feeding the family, and keeping up with family demands. All this, while making sure that family members kept to strict hygiene rules because of COVID-19.

I saw firsthand the resilience of women in Tonga post TC Gita in 2019. Despite the destruction, desolation and anguish that Gita caused for many families throughout Tonga, it was the women in these families who resiliently rose and took charge of the clean-up and repairing of homes. It was the women who ensured that, despite loss and damage to homes and possessions, the family unit itself would make it through those darkest times.

I expected that the practice would be no different with TC Harold and that the 113 families that either completely lost or had major damage to their homes on 9 April would have resilient women working around the clock to bring things back to normal as soon as possible, despite the burden of the COVID-19 lockdown.

By 10am on 9 April, I received communication from one of the staff of the organisation I work for, the Women and Children Crisis Centre (WCCC). I was told that our centre branch office in ‘Eua had been completely destroyed. Everything inside has been damaged. The ‘Eua WCCC counsellor informed me that she was still going to undertake safety and risk assessments with the families at nearby evacuation centres whose homes were completely or greatly damaged by the cyclone. By midday, two of my staff on Tongatapu had already made safety risk assessments at evacuation centres on the main island, despite the challenges of social distancing rules. Both staff on Tongatapu and ‘Eua reported back by 10pm the same day. What they observed and found was indeed what we had already experienced and documented during the aftermath of TC Gita. It was the women who were cooking at and cleaning the evacuation centre and quickly preparing to return home to clean up and fix whatever could be done before sundown.

A woman wrote to WCCC at about 11:15pm on the evening of 9 April stating the following (which is reproduced here with her permission):

(translated) Hello. I ‘m married with three children. Ever since I’ve been married my husband has never stopped having extramarital affairs. We have been on and off many, many times. Last year I wasn’t feeling too well and I went and got a medical check-up. To make a long story short, I found out that my husband had given me a sexually transmitted disease. I confronted him about this and he denied it but he eventually blamed it on one of the women he had been sleeping with. During the lockdown, he couldn’t go as he usually does in the evenings and over the weekends and because we were all stuck at home he forced me to have sex with him. I didn’t want to have sex with him because of the fear of getting the STI again. One night during the lockdown, I refused and he grabbed me by the arm, twisted it around my back and hurt me before forcing me. I now am scared I will get the STI again, what should I do? I am too embarrassed to go and get tested again.

Imagine for one moment you are this woman. Meeting all the demands expected of her as a mother and a wife during lockdown. Having to deal with the anxiety of catching another STI and on top of that being forced to have sex in a violent way. Then having to deal with the possible oncoming impacts of TC Harold.

If that is not resilient, then I don’t know what is! But this I do know: women’s resilience in the face of adversity is more than often never talked about. It doesn’t make the news. It is rarely talked about in depth during post-recovery cluster meetings. It is almost certainly never talked about in terms of women being our true superheroes in dealing with crises head-on and ensuring that families get back to normal as soon as possible. Instead, children are socialised into thinking ‘that is the role of a mother’, and so it becomes an expectation rather than an example of resilience and strength.

We need to change this narrative, and acknowledge and recognise the critical role of our women during crises. Imagine if women were given a platform to come together and develop a national response to national crises. I absolutely have no doubt that we would see some pretty kick-ass action happening across our nations. Think about that for moment.

‘Ofakilevuka (‘Ofa) Guttenbeil-Likiliki is Director of the Women & Children Crisis Centre (WCCC) in Tonga, a women’s rights activist and a filmmaker.