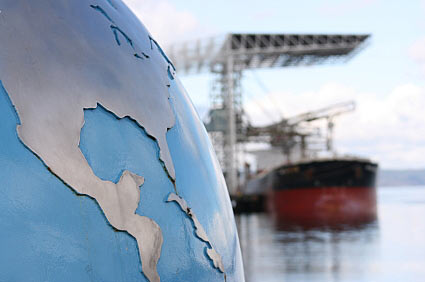 In part one of this post, I attempted to provide an overview of what Aid for Trade is, how it works and if it works. In part two, I will explore some of the challenges that a focus on Aid for Trade raises for the aid program.

What is the impact on poverty?

At the macro-level, most seem to agree that, in the long run and on average, trade liberalisation and increased trade reduces poverty. Indeed, during a recent speech, the Foreign Minister declared (in response to a question about trade’s impacts) that “a rising tide lifts all boats”. But the impact of trade reform efforts on poverty reduction is more complex and debated and depends greatly on the country context and on the structure of the economy in question.

One of the big questions is whether the Aid for Trade efforts are aimed at improving trade in a sector in which a large number of the poor are economically active; whether the growth translates into job creation and wage increases or just wealth; and the extent to which the poor are equipped to take advantage of the new job opportunities (if they do indeed exist). To continue the Foreign Minister’s aphorism, there are certainly cases where the poor or marginalised are not even in a boat so as the tide rises, they are just as likely to drown. Additionally, if trade reforms lead to increased government revenue, are those funds being spent on social programs that might lift up the poor so that they can engage in economically and socially productive action?

A Traidcraft report [pdf] states that many Aid for Trade programs “have only an indirect effect on poor and excluded groups and poverty reduction. Generally, poverty reduction is measured only at the goal level (with macro-level indicators).” The impact on poverty is long-term and indirect, making the link between Aid for Trade and poverty tenuous and subject to considerable debate. The underlying theory of change is based on complex and long-term assumptions that are often very difficult to measure.

A recent review by Britain’s Independent Commission for Aid Impact of DFID’s trade development work in Southern Africa was harshly critical of the program’s effectiveness. One of its main critiques was that the program assumes that it will benefit the poor, but that it has not actually linked any of its activities to poor people nor has it mitigated negative impacts such as increasing food price volatility.

A Guardian UK article on Aid for Trade includes an important concession from the head of Aid for Trade at DFID: “The poverty impact is indirect, and we are very clear about that. The assumption is – and there is a lot of evidence to support it – that if a country is able to trade more, it will grow, and that will create jobs and increase incomes and lead to poverty reduction. That’s a very long results chain, so we don’t try to make a direct attribution of the direct poverty reduction impact. We don’t have enough information to do that robustly.”

The attribution difficulties and complex theory of change are a challenge for DFAT as they have emphasised rigorous performance measurement and transparency for the aid program. Perhaps with this in mind, ACFID has already endeavoured to highlight the importance of inclusive growth focused on indigenous peoples, women and the disabled.

Thus putting Aid for Trade at the centre of an enterprise (i.e. the Australian aid program) whose mission statement explicitly aims to reduce poverty (“Australia’s aid program will promote Australia’s national interests through contributing to international economic growth and poverty reduction”) is a bit tenuous. The European Community has acknowledged this challenge and has declared that “inclusive and sustainable growth in long-term poverty reduction” is of the upmost importance in its trade-related assistance program.

Trade liberalisation by LMICs while rich countries maintain trade-distorting subsidies in key areas of possible LMIC export, further undermines the whole endeavour. As Bob Warner noted in a 2013 blog post, many LMIC were persuaded to accept trade liberalisation “but got very little in return in terms of market access in areas that really mattered to them”. For example, the US$47 billion in cotton subsidies given to high-income farmers over the past decade has undermined the viability of West African producers – irrespective of efforts made to improve infrastructure or reduce customs delays.

Implicit in the focus on Aid for Trade is the prioritisation of one goal (trade) over other development goals such as health and education. In reality, there are situations in which trade can harm development. For example, food trade can have a damaging impact on health. In the Pacific, the removal of trade barriers led to more fatty foods being consumed, thus exacerbating non-communicable diseases in the region such as diabetes and obesity. There are concerns with the Trans-Pacific Partnership trade agreement that it will weaken public health protections in the interests of increased trade. Furthermore, there have been a number of examples from around the world where the construction of highways and other transport infrastructure has led to surges of sexually-transmitted infections along the route.

While in Vanuatu in late 2013, Bishop announced a $37 million aid package to improve the country’s roads, citing tourism as the main reason: “upgrading the roads is a significant part of their ability to capture the benefits of that increasing tourism market. It makes up about 18 percent of their GDP”. The Aid for Trade language is clearly present with trade representing the biggest rationale for action.

However, in order for Aid for Trade to achieve its goals, it has to acknowledge that not all trade is good for poverty reduction, for inclusive growth and for development. But targeted Aid for Trade initiatives that build essential infrastructure, that target sectors in which the poor work, that build industries that support rather than harm wider development – might all allow Australia to achieve its aid objectives. Specifically, a colleague who works at the intersection of trade and public health has argued that the commonality of purpose between Aid for Trade and public health has not been sufficiently explored. She notes, for example, that in order to address non-communicable diseases, more consumption of fresh fruits and vegetables is needed and that increased demand will need to be met by improved supply. At the same time, such crops represent important exports for LMIC economies. Improved coherence between Aid for Trade and public health could lead to investments that increase fruit and vegetable production, consumption and export in a win-win for well-being and economic growth.

The Aid for Trade initiatives described to date are all based on a relatively narrow perception of growth and benefit that emphasises short-term gain. But a wider understanding of Aid for Trade would be one that embraced the long-term realities of development. Couldn’t one argue that a nutrition program that supports newborns’ cognitive development so that they grow up to become productive members of society, who trade and innovate and export, be seen as aid that supports trade? Or that a program that trains maths teachers in Indonesia could – in a number of years – build the capacity of Indonesians to engage in trade and productive employment?

These examples fit in nicely with Amartya Sen’s Development as Freedom model where the role of development and development assistance is to create an environment wherein individuals can pursue whatever path they choose. An individual therefore must have the basic health, basic education, freedom of expression, freedom of association and opportunity to pursue his or her dreams, careers, paths: whatever they might be. This conception emphasises the untapped potential of the 900 million poor people in the world.

We are yet to see how DFAT conceives of Aid for Trade, but let’s hope their understanding of it is not too narrow and encompasses some of the longer-term possibilities of development.