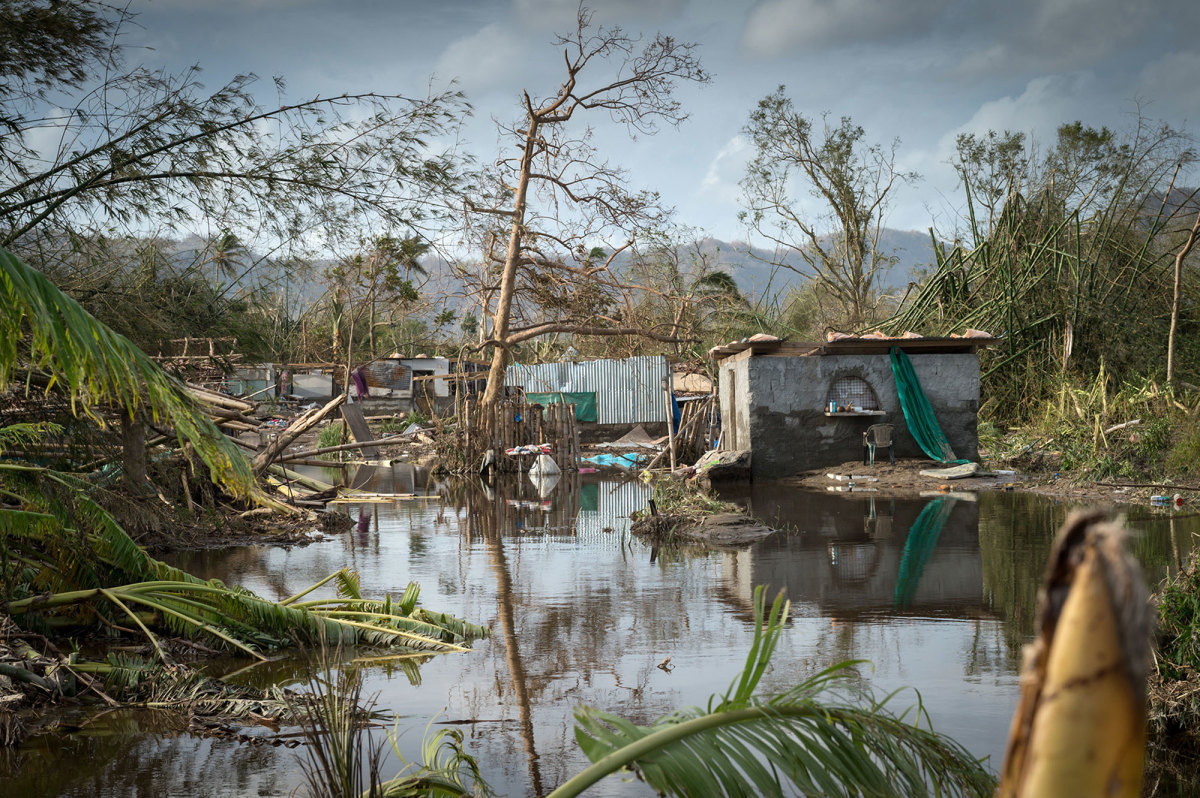 The emergency response in Vanuatu will continue for some months, such was the breadth and intensity of Cyclone Pam. Most households have been affected, with the Office of the Prime Minister claiming that up to 70 percent of Vanuatu’s 277,000 population may have been displaced. Food security, shelter, immunisation and access to clean water have to date, quite rightly, been the focus of the Vanuatu Government and humanitarian partners. Gradually, however, emergency response efforts will be replaced by reconstruction and recovery efforts, aimed at re-building Vanuatu’s infrastructure, housing stock, and agricultural and tourism enterprises. Indeed, reconstruction and recovery activities are already underway.

What is likely to be the economic impact of Cyclone Pam in the medium run (the next three to five years)? There has been little written about the economic impact of Cyclone Pam to date. For those in Vanuatu, such analysis is no doubt too soon – the focus has to date been on the immediate response. There is also limited data on which to base any analysis. The first comprehensive damage assessments will not be finalised for another few weeks. The World Bank and UNDP have been tasked with preparing a Post Disaster Needs Assessment by the Vanuatu Government, and will report back to government by 23 April, ahead of a donors’ conference.

Despite the current lack of data, experience with disasters in the Pacific and other parts of the world can provide us with some guidance on what to expect. Estimates of the damage to infrastructure, housing etc. caused by Cyclone Pam will probably be available by the end of the month. It is clear that such damage will be significant. To illustrate, Cyclone Evan in 2012 was estimated to have caused damage equal to approximately 30 percent of Samoa’s Gross Domestic Product (GDP). We can expect similar, and probably more significant, damage to have resulted from Cyclone Pam.

The impact of Cyclone Pam on future economic output is less clear. There is a substantial body of empirical literature on the lasting economic impact of disasters. Cross-country econometric studies have – perhaps unsurprisingly – reached mixed and often conflicting conclusions. Such empirical work is made difficult by the fact that disasters come in many forms. Vanuatu, in addition to being at risk of cyclones, is also affected by earthquakes, tsunamis, and volcanic eruptions – each of which has different economic impacts. Disasters impact the various economic sectors (such as agriculture and services) differently, and often affect specific geographical areas, not the entire country (Cyclone Pam was unique given the breadth of its impact, but even in this case some islands such as Santo were not severely affected). It is no wonder that cross-country studies are so problematic.

One of the most rigorous efforts to ascertain the lasting economic impact of disasters was commissioned by the World Bank in 2009. Loayza et al. (2009) control for a range of factors that also affect growth (education, institutions, trade openness etc.) when assessing the economic impact of various disasters on the economy as a whole, as well as three economic sectors: agriculture, industry and services. They find that a ‘typical’ (median) natural disaster has a negative impact on future economic growth over the medium run, but that the effect differs according to the type of disaster and the sector being discussed. In some cases, disasters are found to have positive economic impacts. Economic output in the industrial sector, for example, is found to be positively affected by floods, earthquakes, and storms (including cyclones), but not droughts – presumably due to the reconstruction activities that follow such disasters.*

That result differs when severe disasters – such as Cyclone Pam – are considered. The economic impact of severe disasters is more pronounced, with severe storms/cyclones negatively impacting future GDP, as well as future output in the agricultural, industrial and service sectors. In addition, a survey of the literature by Cavallo and Noy (2010) [pdf] concludes that the medium and long run economic impact of a disaster is influenced by a country’s “ability to mobilize significant funding for reconstruction”. Poor countries, they argue, suffer more in the medium and long run as a result of natural disasters, given that reconstruction and recovery efforts are not as effective.

In Vanuatu, this suggests that Cyclone Pam is likely to depress future economic output. The immediate costs to agriculture and tourism – the two most important economic sectors in Vanuatu – are already apparent. Crops used for both cash income and household consumption have been devastated. Although some crops will recover quickly, other crop plants such as kava (which comprised 10 percent of Vanuatu’s merchandise exports in 2014) can take several years to mature. The impact on agricultural producers will therefore be felt for some time.

Tourism arrivals have also collapsed as a result of the cyclone. Although some accommodation operators may be buoyed for the time being by the influx of aid workers, the majority of these visitors are soon likely to leave. Experience in Asia as well as the Pacific suggests that it typically takes several years for a country’s ‘brand’ to fully recover from a disaster, and for tourism arrivals to reach their pre-disaster heights (this article provides practical suggestions for Vanuatu’s tourism industry). In Samoa, tourism numbers remain below their levels prior to the 2009 tsunami. Vanuatu competes with Fiji for tourists from Australia and New Zealand. It is therefore likely that, until the Vanuatu ‘brand’ fully recovers, many tourists that would have travelled to Vanuatu will instead go to Fiji.

Offsetting these declines will be future economic activity associated with reconstruction. Clearly, there is a lot of infrastructure that needs rebuilding. President Lonsdale was quoted after the disaster as saying:

After all the development we have done for the last couple of years and this big cyclone came and just destroyed… all the infrastructure the government has… built. Completely destroyed.

Construction activity is therefore likely to prop up the Vanuatu economy in the coming years as its two main sectors – tourism and agriculture – suffer a downturn.

The ADB has recently revised its estimates of future GDP growth in Vanuatu as a result of Cyclone Pam. These estimates factor in the initial downturn caused by a decline in agricultural output and tourism numbers, followed by an increase in economic activity associated with reconstruction. Economic growth in 2015 is now forecast by the ADB to measure negative 0.5 percent of GDP, compared to the 4 percent growth forecast before the disaster. This would mean that the economy’s output in 2015 is $4 million USD lower than in the previous year, when it had been forecast to be $33 million USD higher. In other words, Vanuatu’s output in 2015 will be $37 million USD lower as a result of Pam than would otherwise have been the case.

But such forecasts, by the ADB’s own admission, are preliminary. In my view, a decline in economic activity of 0.5 percent is probably a conservative estimate. The Samoan economy shrank by 5.2 percent after the tsunami in 2009, although in that case, collapsing remittances caused by the Global Financial Crisis and job losses at the largest private sector employer were also responsible.

What is more certain is that the economy is likely to rebound as reconstruction of key infrastructure comes into full swing. The ADB forecasts growth of 4 percent in 2016. This is significant, and higher than growth in any year since 2008. However, it is slightly lower than the pre-Cyclone forecasts of the Vanuatu Government. The impact of Cyclone Pam on future economic output, relative to what would otherwise have taken place, is therefore likely to be negative – even when looking ahead to when reconstruction is at its peak.

The extent of the reconstruction and its associated economic impact will also depend on the availability of finance. Reconstruction will be expensive given the scale of the damage. Funding from development partners will certainly be important in meeting these costs. But experience around the world tells us that increases in development assistance never fully funds reconstruction. Indeed, in the case of the three cyclones that hit Vanuatu in 1985, damage was estimated by the World Bank at 127 percent of GDP. The ensuing aid ‘surge’ measured just 4.5 percent of GDP. In the more recent example of Cyclone Evan in Samoa, donor grants increased by less than 5 percent of GDP (damage, as noted above, was valued at 30 percent of GDP).

If we assume for a moment that damage in Vanuatu does equate to approximately 30 percent of GDP (I believe it will be higher), this is equivalent to $248 million USD. Add to this lower economic growth in 2015 to the tune of $37 million USD, and we have a total economic cost associated with Cyclone Pam of $285 million USD. This figure dwarfs the response from development partners. A typical major donor in Vanuatu has to date announced approximately $5 million USD in humanitarian assistance.

The key question for the Vanuatu Government in the coming years will therefore be how to finance the reconstruction effort. This and the policy implications of reconstruction will be the topic of another blog post.

Matthew Dornan is Research Fellow at the Development Policy Centre.

*It is important to stress that these studies, in examining economic impacts, are concerned with the economy’s (or sector’s) output. They are not concerned with economic welfare. Despite the frequent conflation of Gross Domestic Product (GDP) with well-being, they are not the same – a point repeatedly emphasised by Simon Kuznets, who established the first GDP indicator in the USA. A disaster illustrates this point well. The destruction and subsequent reconstruction of a house generates economic activity and thereby positively impacts GDP. Few would argue that this makes the owners better off.