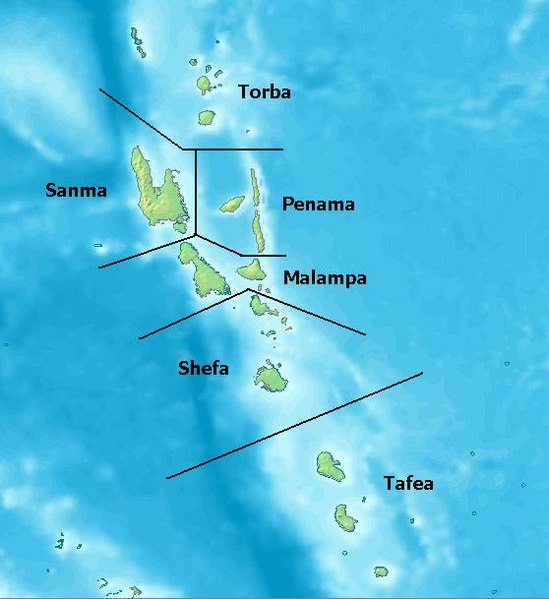 In July 2018, the Department of Pacific Affairs (DPA), in collaboration with the Vanuatu Department of Labour and Employment Services (ESU), undertook a demographic study of ni-Vanuatu workers in Australia’s Seasonal Worker Programme (SWP) and New Zealand’s Recognised Seasonal Employer scheme (RSE). The rationale for the exercise was to determine which provinces, islands and villages are gaining access to these programs. The information collected will be used to determine future research on the impacts of labour mobility in Vanuatu. Our database sample contains information on workers’ age, gender, marital status, education, their agents or employers, the type of job, whether they are returnees, and other personal information, which will be the source for future publications. This type of data collection has the potential to assist future decisions on labour mobility policy and development outcome assessments. We recommend other Pacific island states consider undertaking such demographic research.

Of all participating countries, Vanuatu has the largest number of workers in Australia and New Zealand combined, with an estimated 7,000 participants in the RSE and SWP during the data collection period (June 2017 to June 2018). The data collected was limited in scope due to reliance on agents sending information to the ESU and working with a new database system that had only just been established (thanks to Erick Sakou from the ESU for working hard to provide the most up-to-date information at the time). As a result, there were only 2,992 workers on the database who had travelled to Australia and New Zealand between June 2017 and June 2018. In drawing conclusions, it should therefore be borne in mind that less than half the total number of workers across the two programs are reflected in the results of the study. However, the results remain useful for both DPA and the ESU.

For DPA, such demographic analysis can assist in the determination of future research such as examining social and economic impacts of these schemes within the country, especially in localised developmental impacts (or lack thereof) of the RSE and SWP on particular villages and islands. For the ESU, it assists in addressing policy development in international labour mobility and recruitment practices in provinces. Furthermore it also addresses the constant accusations of unfairness and lack of opportunities to access the schemes. For example, it is often rumoured throughout Vanuatu that only family members of MPs, ESU staff and licensed seasonal worker program agents living in Port Vila are selected to participate. However, this sample shows that there is a relatively even distribution throughout provinces per head of population. It also provides information for Vanuatu’s upcoming labour mobility policies and domestic practices that intend to address inequalities in access to the RSE and SWP and other potential labour agreements in the future.

Because we limited our scope to workers who had provided their island of origin, the sample set dropped to 2,511 workers. This set was then broken down into provincial and island figures. 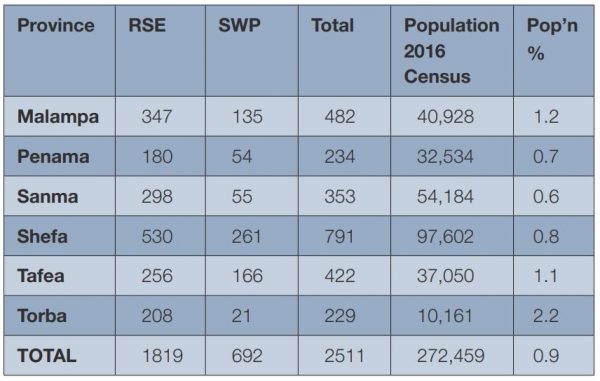 An unexpected discovery from this analysis was that the largest number of workers per head of provincial population was recruited from the smallest and most distant province, Torba.

In terms of numbers of workers sent from islands, the top five in order of largest numbers are: Efate (442); Tanna (388); Santo (269); Malekula (237); and Ambrym (165). These numbers are not surprising given that Tanna and Ambrym were part of the World Bank pilot project in New Zealand in 2006 (see Schwass 2007). Per head of population, the top five islands sending workers are: Mere Lava 13.7% (Torba province); Tongoa 9.6% (Shefa province); Moso and Pele islands both 6.3% (Shefa province); and Moto Lava 5.5% (Torba province). With the exception of Moto Lava, these are all islands with a population of less than 1,000.

Examining who in Australia and New Zealand is recruiting and employing workers from these provinces is vital in analysing the selection of workers. For example, similar to the accusations of unfair worker selection practices in Vanuatu, agents, labour hire companies and direct employers in Australia and New Zealand have also been accused of recruiting through family and community networks in particular regions of Vanuatu. Using Torba province as an example, where the majority of workers are involved in the RSE, workers are employed by 20 various RSE employers and spread evenly. However, there are six employers for whom residents from Torba make up the majority of the ni-Vanuatu workforce they employed. For example 29 of the 44 workers hired by one RSE recruiter were from Torba. In relation to Torba workers in the SWP, one employer recruited 43% of the workers from this province. Previous conversations with employers have also revealed that recruitment is often based on relationships developed with workers from particular communities (see here and here). It is important to note that recruiters have recently actively expanded their recruitment drives to other islands, based on advice from the ESU and employers (according to personal communications with Gwen Carlot, Vanuatu Operations Manager of Seasonal Solutions Cooperative, New Zealand 11/03/2018).

As mentioned earlier, there were limitations for both ESU and DPA in collecting this data, in particular the need to rely on recruitment agencies and labour hire companies to submit data to the ESU. New Zealand’s RSE–Strengthening Partnerships Programme and Australia’s Labour Mobility Assistance Program, which both provide support for Pacific island sending nations, has significantly improved information collection practices and database training to private sector agents, direct recruiters and Pacific labour sending units. This was noticeable when comparing the 2017 database to 2018; the latter was more comprehensive, demonstrating that the system of data collection of migrant workers is improving. However, given the large number of workers absent from the database, the collection of data urgently needs improvement and oversight, a matter being addressed by the ESU.

Although the data did not capture every participating worker for the 2017–18 period, it has allowed us to recognise problems in data collection and build stronger information-sharing in the future. The data has revealed that the RSE and SWP are reaching rural Vanuatu and that recruitment from particular areas is associated with agent and employer preferences, although this too is receiving attention, with the ESU actively promoting agents to recruit from a more diverse range of remote areas in Vanuatu. Further research is required to capture and assess the extent to which residents of the more remote villages of these provinces are gaining information about and access to labour mobility opportunities. While our analysis is still in the preliminary stages, the data has raised a number of questions and themes about recruitment, which will be highlighted in upcoming publications.

This post was originally published as Department of Pacific Affairs (DPA) in brief 2018/22.

Julie Rereman is the Senior Labour Officer of the Vanuatu Employment Services Unit.