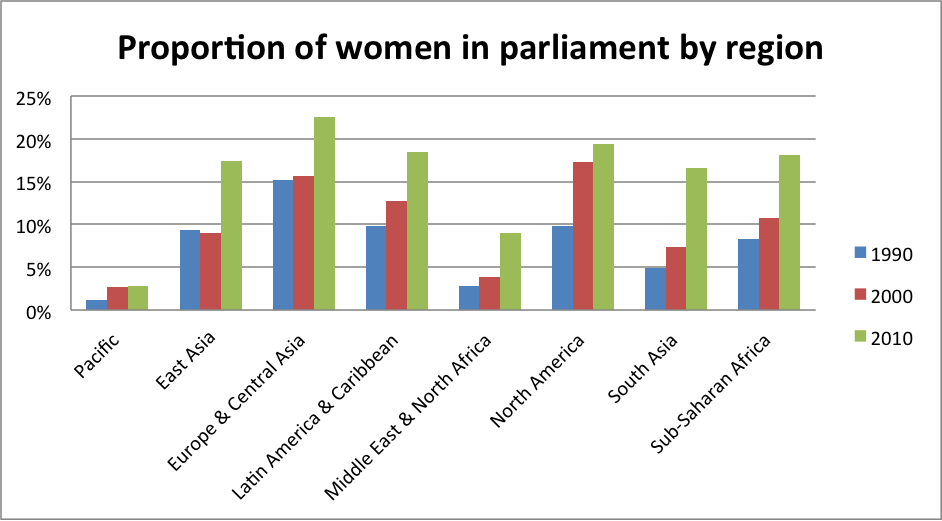 Apparently female parliamentarians are important as well – World Bank researchers have associated them with a reduction in corruption.  The UN has even included increasing the number of female legislators as a key outcome of Millennium Development Goal 3.

Why this is the case requires further research. We try to separate the impact of having more female MPs from the impact of broader attitudes to gender. The ability of elected females to achieve improvements in the overall state of the economy is perhaps driven in part by the fact that female MPs have to break through a ‘glass ceiling’ to enter parliament in most countries.  These women may on average be quite extraordinary and thus have a greater effect on policy outcomes than the average male parliamentarian.

Globally, there has been a reassuring upward trend over the last three decades in the representation of women in parliament.  However, it remains that on average less than one in five seats in national parliaments are held by women. Some countries have no females in their parliaments.

Strikingly, the Pacific Island countries lag behind, and have failed to keep up with improvements in female representation globally over recent decades.  Only Samoa and Timor-Leste have female shares in parliament exceeding 4%.  Compare this number with a global average of 18% and our Pacific neighbours are starting to feel a little lonely. 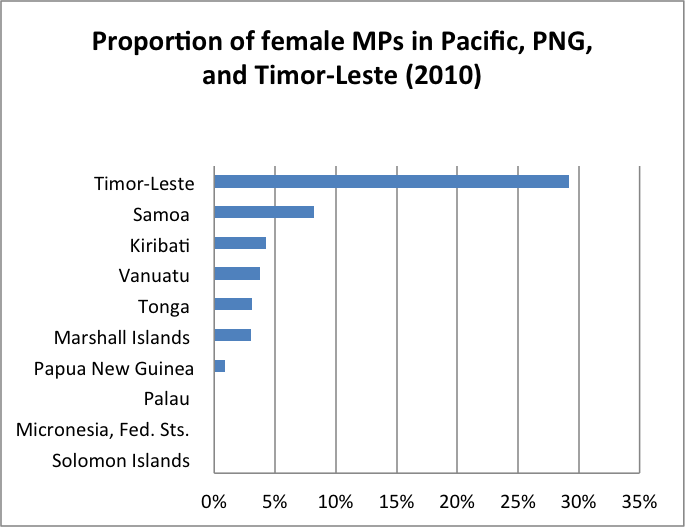 Increasing the number of female legislators is clearly a matter for sovereign nations. Yet donors have a role to play in communicating the broad benefits of improving female representation in the parliament. This is especially important in the Pacific. The challenges are large: in PNG, for example, a bill to reserve a minimum number of seats for women failed to win support in late 2011.

Ultimately, there is growing evidence that there are economic and other dividends to be gained from removing the barriers for females to enter politics.  Hopefully our Pacific Island neighbours will start to take note.

Dinuk Jayasuriya and Paul J. Burke are Research Fellows at the Crawford School of Public Policy.