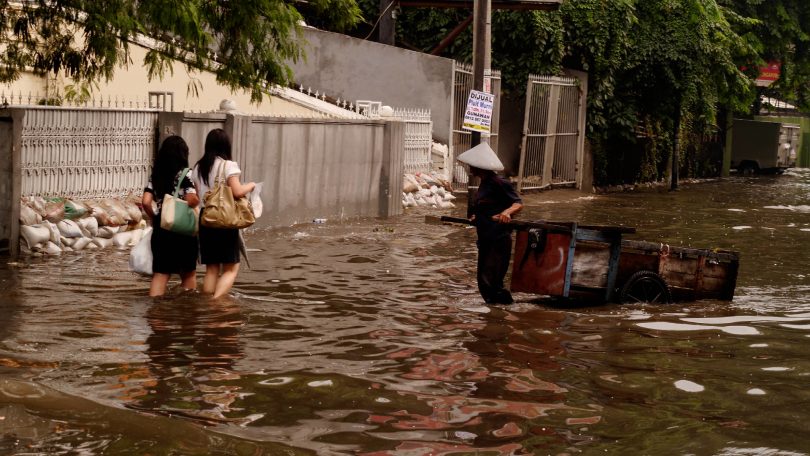 All eyes are turned to the United Nations climate change conference (COP26), with preparations and lobbying reaching their zenith. The release of the Intergovernmental Panel on Climate Change (IPCC) Working Group I contribution to the Sixth Assessment Report has led the UN to declare ‘code red’ for humanity. Here in Australia, our own devastating bushfires of 2019–2020 caught international attention, putting us firmly front-and-centre in illustrating the extremity of events we now face.

As efforts to mitigate greenhouse gas emissions take on renewed urgency, so too does the need to adapt and build resilience to climate changes that are now regrettably locked into unstoppable global warming effects. One such unstoppable trend is the climate-related intensification of the hydrological cycle, meaning peoples’ livelihoods and wellbeing are more frequently and severely impacted by too much or too little water. There are complex and tangible risks facing not only water for human consumption and production, but also for biodiversity and ecosystems.

There are many aspects of geography, population and forecasted climate change impacts that put people of the Asia-Pacific among the most vulnerable to an intensification of the water cycle. The Asia-Pacific has the fastest growing economies in the world, but it is also home to the largest number of poor and disadvantaged people on the planet. Asia has globally significant freshwater biodiversity, coupled with millions of people whose livelihoods and economies depend on small fisheries and healthy rivers.

In our region, and everywhere, the first effects of climate change are being experienced through water. When so many climate change impacts are felt through the hydrological cycle – storms, floods and droughts – it is essential that water management is part of global discussions about climate adaptation. To date, water has been typically treated as a cross-cutting area in climate change negotiations. At COP26, water-climate interactions are being highlighted by concerned water organisations at the Water and Climate Pavilion.

The core of adaptation is building resilience, and this happens at a societal, ecosystem, community, household and individual level. For example, provision of water, sanitation and hygiene (WASH) builds individual and community resilience and readiness to respond to shocks, including climate-related shocks. This is through the well-documented links between WASH, health, education, and economic growth. There are still dire gaps in WASH access in the region, particularly the Pacific, where 43% of the population (5.3 million people) do not have access to at least basic water supplies, and 65% (8 million) do not have access to basic sanitation.

While the IPCC report is comprehensive in its analysis and predictions of water-related climate impacts throughout the region, and the level of confidence with which these will occur, localising predictions to specific areas is still needed. Adapting to climate-induced changes in the water cycle must be context-specific, and locally driven, with those most affected involved in planning and decision-making. However, this requires access to data and capacity that many countries don’t have. The role of the developed world to help developing countries cope with climate change should extend to this kind of support.

Where there are challenges, there is always human ingenuity. There are numerous examples of water initiatives that build resilience to climate change, spanning policy, governance, collaboration and coordination, inclusion, technology, and data management.

A good example of the private sector collaborating to manage water-stressed catchments to safeguard water for production and people comes from West Java, Indonesia. Companies such as Unilever, Coca-Cola, L’Óreal, Nestlé and others have come together to form the Indonesia Water Coalition, and use the Alliance for Water Stewardship Standard to promote joint action on water at the catchment level.

In Pacific island countries, individual and community-level rainwater harvesting is increasingly common for both drinking and irrigation. Climate-related disasters in the Pacific are not new, and communities have successfully adapted to such risks through their traditional knowledge and institutions. Addressing capacity and resource constraints, supporting drought preparedness, and exploring alternative service provision models can help address gaps.

Bringing the focus back to Australia, the water sector is slowly opening to include indigenous knowledge and values in water management. Australian indigenous peoples’ knowledge of water systems and their cultural meaning, and representation in water rights and decision-making, is a critical asset to our future water resilience.

In another example, there are lessons to be learnt from Australia’s management of the Millennium Drought. The drought prompted new modes of engagement, and increased data collection and information sharing. It prompted partnerships between government, private sector and community organisations that previously didn’t exist. It stimulated hugely effective water efficiency programs, and a boon in water-related research and knowledge sharing.

The Millennium Drought shows us that it is possible to rally and collectively respond to a challenge. The challenge is set for us: the future climate is going to throw events our way that have never been experienced in the written record, and they will all involve water.

Now is the time for building a collective vision for resilience in water management, and its governance and equitable allocation, so that we can adapt and find a way through the crises that lie ahead. It is essential that Asia-Pacific perspectives and voices are part of this discussion. Australia can play a role in bringing water and adaptation to the foreground at COP26.

The Australian Water Partnership will be hosting a virtual event on this topic within the COP26 Water & Climate Pavilion, on 8 November at 5pm AEDT.

Bronwyn Powell is a water and development specialist based at International WaterCentre, Griffith University. She is working with the team at the Australian Water Partnership to prepare its Water and Climate Pavilion COP26 event.