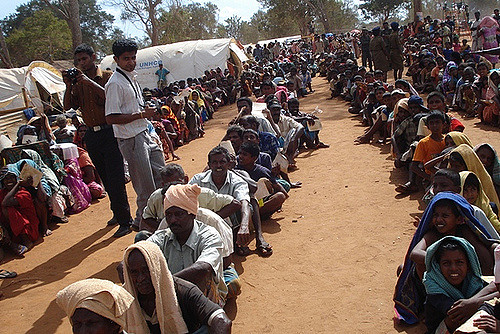 While mental illness affects people globally, some of the hardest hit are those living in conflict and post-conflict zones. Academic papers have recorded symptoms of depression ranging between 40 and 60 per cent in the Central African Republic, Uganda, South Sudan and Sri Lanka. Yet, a recent post on this blog highlighted that mental health is often invisible in government development strategies and handled with a degree of scientism within the aid sector.

So what can be done about it? Much of the recent discourse aims at addressing the symptoms of mental illness; for example, psychosocial support is provided by World Vision, the Red Cross and the World Health Organization (WHO), among others, and advocated for by an umbrella group on mental health and psychosocial support. This is clearly important; however, it is also important to understand the causes of mental distress, and address them where practical.

A new study (just published in The Lancet Psychiatry) draws on a 2014 survey of 20,632 people throughout Sri Lanka, to investigate factors associated with depression and anxiety. Data was collected using tablet devices, which increased efficiency and permitted greater oversight of data quality. We (myself and academics from UNSW) find that post-conflict areas of Sri Lanka had populations where 40 and 23 per cent of the population were depressed and anxious respectively, compared with 10 and 13 per cent in areas minimally affected by conflict. For our analysis, we use the population attribution fraction (PAF), which, according to the WHO, highlights the proportion of disease or mortality that would occur if exposure to a risk factor were reduced to an alternative ideal exposure scenario. Here, the ideal (or counterfactual) scenario is ‘not being depressed’ or ‘not being anxious’, while being depressed or anxious is the current exposure.

Using the PAF, we estimate that depression and anxiety could be reduced by 53 and 57 per cent respectively if safety (i.e., a risk factor measured as a self-reported assessment of safety over the last two years) were improved. Removing army camps, addressing food security, improving employment opportunities and eliminating threats were each estimated to contribute to less than a 10 per cent reduction in mental illness.

What’s striking is the impact that improvements in safety would have on reducing mental distress. While some safety related issues may be attributed to human rights violations, a 2012 study showed that alcohol/drug fuelled violence, other violence against women and children, robberies and elephant attacks all contribute to safety concerns in post-conflict areas of Sri Lanka.

Hence, while programs such as “Reconciliation Through Mental Health Integration in the Northern Districts of Sri Lanka”, which provides pathways for communities to access psychiatric support, are welcome and extremely important – particularly where the effects of war still linger – our results suggest that mental illness can be significantly reduced by eliminating current stressors. This goes to treating the cause of mental illness, not just the symptoms.

We also provide other information capable of guiding policy, which is aimed at reducing levels of distress in a post-conflict population. This is based on basic multivariate analysis, which investigates associations of risk factors with mental distress. For example, our finding of fixed characteristics associated with an increased risk of distress (in this case, advanced age, being married, ethnic minority status, and living in a moderate or severe conflict zone), could offer guidance to clinicians and planners in detecting individuals and subpopulations in the greatest need.

Our population-attributable fraction findings should be viewed as indicative of the gains that could be achieved by progressive social policy, with the acknowledgment that there are many challenges (historical, political, and ecological) to re-establishing conditions that exist in minimal conflict zones (the comparator used in the analysis) in those that have experienced the disruptions of prolonged warfare. Further, as we only present results of a cross-sectional survey, we can only discuss associations, not causality. We hope that data from a follow-up survey conducted one year later may be used to demonstrate causality and to highlight whether persisting insecurity is associated with prolonging of symptoms and/or whether perceived improvement leads to a reduction in symptoms.

Ultimately, we hope our study demonstrates that epidemiological surveys of this scale can provide important information capable of guiding policy aimed at reducing levels of distress in post-conflict populations.

Dinuk Jayasuriya is Research Director at Red Elephant and a Visiting Fellow at the Development Policy Centre.