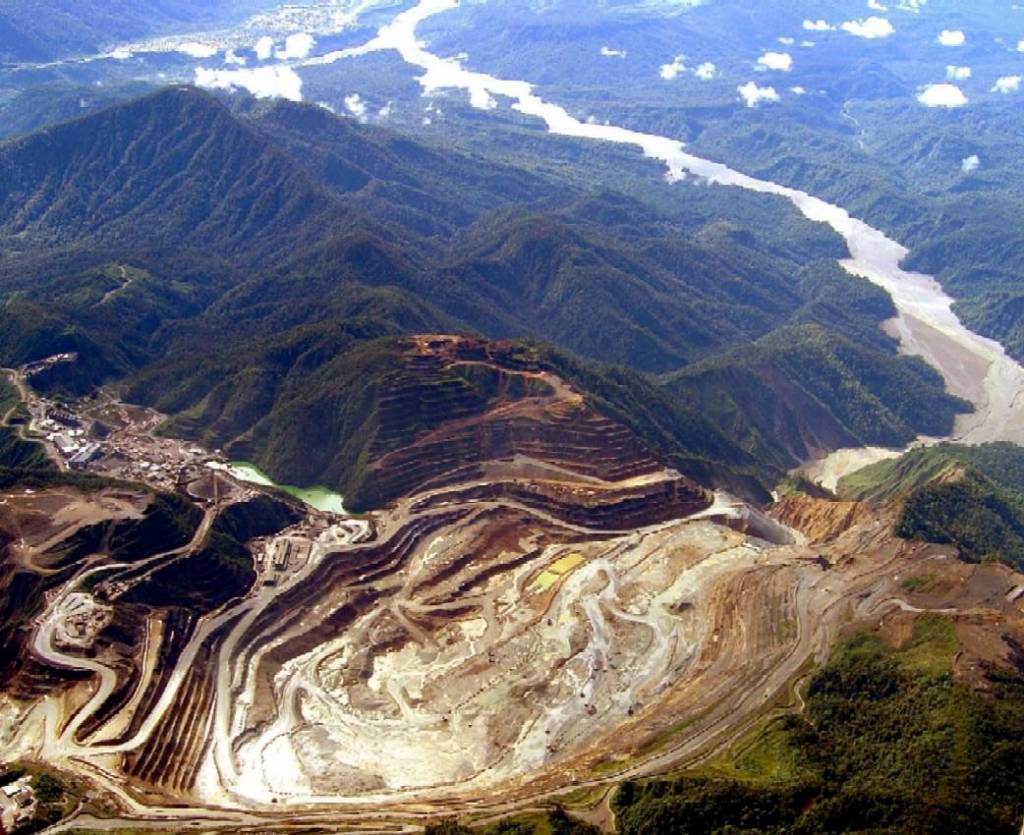 Last year the Development Policy Centre published a discussion paper and blog post that I authored. The paper looked at the private sector’s reporting on their economic, social and environmental contributions in developing countries. Most large companies subscribe to international frameworks for corporate sustainability and responsibility that require them to publish information on the economic, social and environmental impact of their operations. The quality of this reporting is mixed – companies tend to report on different indicators even when they’re in the same line of business, and even where they have indicators in common, they define them differently. As a result, it is difficult to compare or aggregate companies’ development contributions.

To answer the question, “how would developing countries know what the private sector is contributing to their development?”, I identified those indicators already used in international corporate sustainability and responsibility frameworks that are most relevant to development and proposed using them for a case study of Papua New Guinea. I expected to source most data from company reports, direct contact with businesses, membership surveys by business organisations (Chambers of Commerce and Chamber of Mines and Petroleum) and company websites. In the event, this proved unrealistic – most PNG businesses are not registered public companies so they have no obligation to publish details of their development contributions (though many provide some useful information), and business organisations were not able to provide relevant data across their membership, though the PNG Chamber of Mines and Petroleum provided valuable mine-specific data.

I modified the case study to focus on the four largest mining and petroleum operations in Papua New Guinea with published annual data on their economic and development contributions over a number of years: Lihir Gold Limited (owned by Newcrest Mining since August 2010), Oil Search Limited, Ok Tedi Mining Limited and Porgera Joint Venture.[1] Representatives of the companies provided additional information, for which I thank them.

To recap, the key indicators for the case study were: core business contributions (payments to government; payments to landowners, communities and development authorities; value of procurement from local business; wages paid to locally-hired labour; numbers of locally-hired workers; and training and education provided for the local work force) and community contributions (value and type of corporate community programs paid for by government, donors and the business; benefits from community programs).

My aim was to collect data for three years (2009, 2010 and 2011) and calculate the average to smooth for annual fluctuations; some indicators had only one or two years of data, so this was used for the ‘annual average’ calculation. United States and Australian dollar data was converted to PNG kina using exchange rates published on the Bank of Papua New Guinea’s website. Data was not available or was not sufficiently robust for all of the indicators listed above, so this analysis focused on the indicators listed in Tables 1 and 2 below. 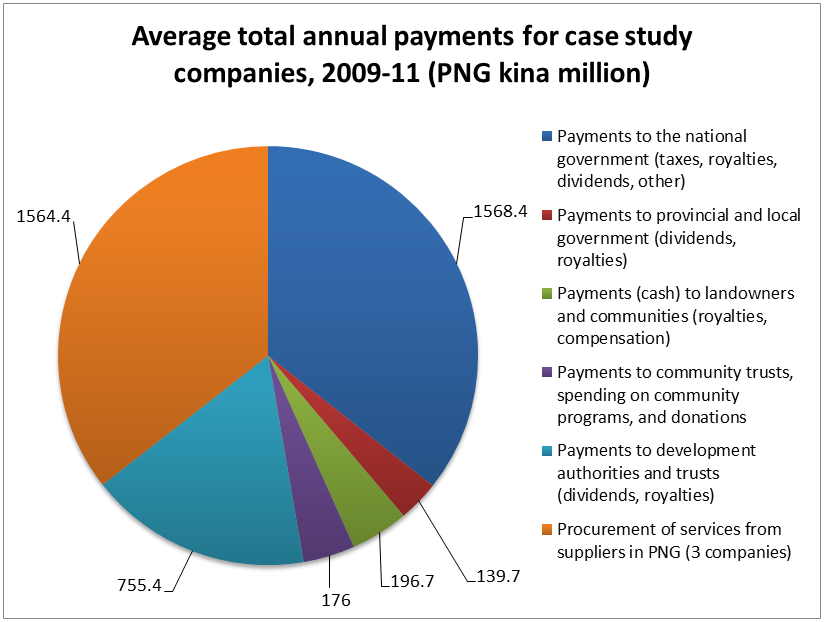 Total annual averages for case study companies for the period 2009-2011: 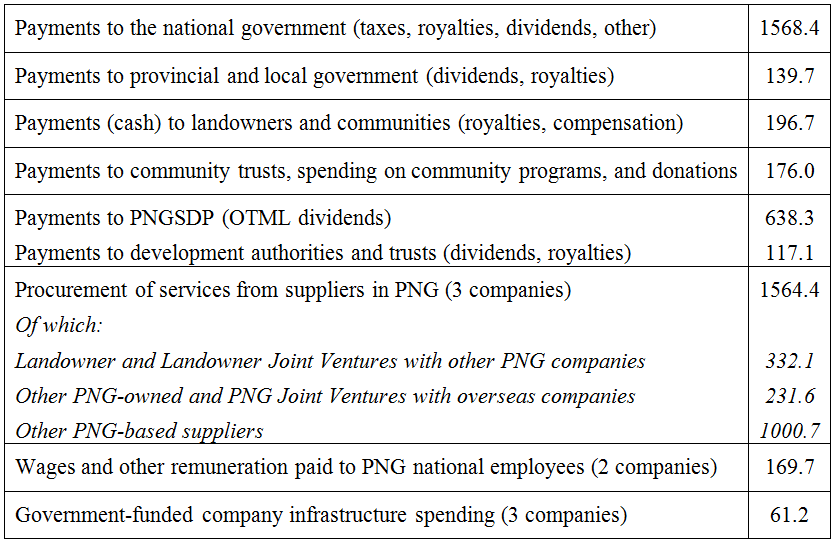 What can we learn from this data?

1. The largest contribution to national development by the big four mining companies in Papua New Guinea was taxes and other statutory payments paid to the national government, PGK1568.4m. This represents an average of 17.2% of the PNG government’s total revenue and grants over the period (calculated from PNG Treasury budget documents) and confirms that mining companies have a big stake in the national government’s capacity to use revenue well to provide development benefits to Papua New Guinean citizens.

2. The next largest contribution to PNG’s development was company procurement of services from national suppliers. For three of the four companies who reported on this indicator, average annual procurement from suppliers in Papua New Guinea amounted to PGK1564.4 million (the fourth company did not separate goods and services procurement). Over one-third of this, PGK563.7 million, was procurement from local landowner companies, other PNG companies or PNG joint ventures with overseas companies. So mining companies are a large market for other PNG businesses.

3. Dividends and royalties paid to development authorities amounted to PGK755.4 million. Over 80% of these were paid to PNG Sustainable Development Program (PNGSDP), the 63% owner of Ok Tedi Mining Limited. An independent review of PNGSDP in 2012 found that it had made worthwhile infrastructure investments in Western Province but needed better evaluation information to be able to draw broader conclusions about its development contribution (see more here). In terms of other mining project development authorities, a recent study of benefit flows from the Porgera mine concluded that it was not possible to determine how the Porgera Development Authority had turned revenues into infrastructure or health and education services because of a lack of information.

4. Cash payments to landowners and communities from royalties and compensation payments are substantial, PGK196.7 million (note that this is an estimate based on information about company agreements with communities – company reports tend not to specify which payments are made in cash). There is little hard data on how households and landowner groups use these payments and their development value. But many landowner organisations are not run in a transparent and accountable way, see for example Thomas Webster’s comments here. And the benefits of payments to households need further study – according to one Asian Development Bank study of the impact of the Ok Tedi mine over 20 years, less than 1% of Ok Tedi landowners’ total annual household expenditure was invested in agriculture and about 6% was invested in nonagricultural enterprises. From interviews with women in the South Fly district, Jo Chandler writes “… the women say the cash soon goes on food, fuel and school fees. Some see little of it – it vanishes in Daru or Port Moresby, with their husbands.”

According to World Bank J4P (Justice for the Poor) research in Western Province, mining company initiatives to make payments into family bank accounts to which women have access have assisted in increasing control over how money is spent.

5. Another large development contribution, PGK176 million, is the omnibus, ‘Payments to community trusts, spending on community programs, and donations’. In a separate blog post I intend to cover the challenges of analysing company community programs. These programs are often subject to intense negotiation with landowners, communities and provincial and district governments, all of whom have high expectations of potential benefits from mining projects. But companies also retain some control over how much they spend and what programs they fund or implement. Reporting on the development benefits of these programs is mixed and often lacks reference to local, provincial and national development objectives, although there are exceptions.

6. Case study companies spent an average of PGK61.2 million per annum on local infrastructure investments funded by the national government under the infrastructure tax credit scheme (TCS). Three of the four companies participated in this scheme – one did not start to pay corporate tax until 2010 so was not eligible for the scheme. Through the TCS, companies are granted a tax credit for approved infrastructure investments, and they manage and oversee the works, which included roads (construction, upgrading and maintenance), power supplies, government services (administration, policing, courts, education and health) and community facilities.

7. Concerning employment, only two of the four companies reported on the value of wages and other remuneration paid to employees – their estimated total remuneration to PNG nationals for one year was PGK169.7 million. While this seems modest considering the size of mining operations, mining is not generally a large direct employer. Average total employment for the case study companies was 7791 — 7154 of these were PNG nationals. They represented 2.9% of the total estimated 2010 PNG formal sector employment of 250,000, see Colin Filer’s presentation [pdf] on the PNG case study for the ‘World Development Report (WDR) 2013: Jobs’.

The above employment data does not include contractors to mining companies. In his analysis, Filer estimated a multiplier as high as three, that is, three jobs created in the formal and informal sectors for each one in mining. In addition, mining generated significant remittances – up to half of all PNG nationals working in mining projects come from outside the mine area, and their remittances to relatives at home were estimated at PGK2 million in 2011. The same research estimated that skilled PNG nationals sponsored by mining companies to work in Australia remitted up to PGK10 million in one year. Almost all of these skilled workers received significant skills training and experience in mining operations in Papua New Guinea.

This case study confirms the significant contributions to development in Papua New Guinea of mining companies’ tax and other government payments. Mining company procurement is also an important market for other PNG businesses. And although numbers directly employed in mining are modest, mining supports many jobs in other sectors, provides training and work force skills, and leads to remittances that are available for social and economic investments in communities across Papua New Guinea. However, the potential development benefits from mining company contributions are undermined by poor government capacity to convert revenue into basic infrastructure and services, and weak accountability and often poor performance by development authorities and landowner organisations. The benefits of corporate contributions to community programs will be the subject of a separate blog post.