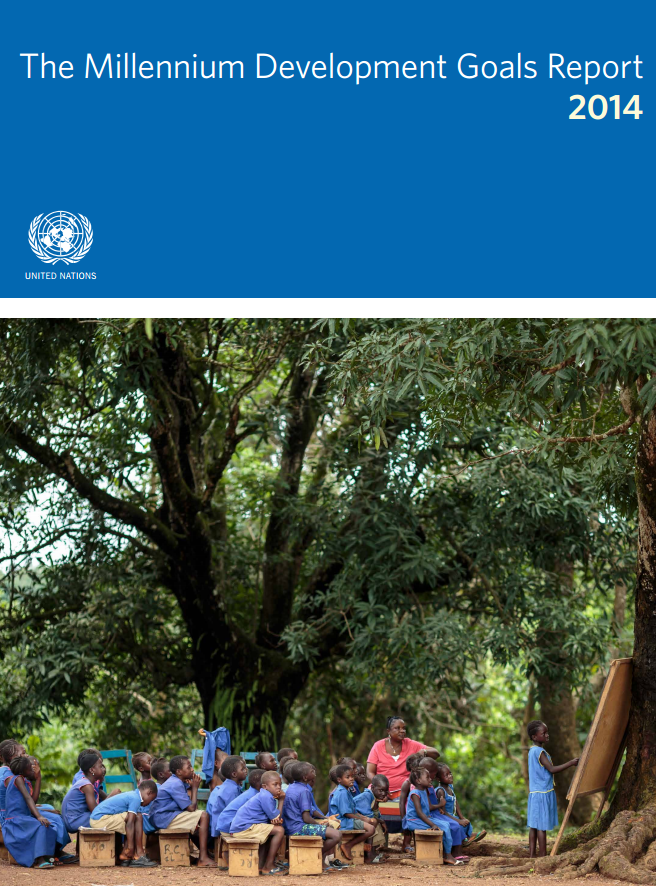 The Millennium Development Goals Report 2014 has just been released in New York City and will have its Australian launch next week at the Australian National University. This years’ foreword by UN Secretary-General Ban Ki-moon gives up on the ‘one last push’ rhetoric of 2012, which persisted weakly into 2013, and instead moves the caravan along: ‘our efforts to achieve the MDGs are a critical building block towards establishing a stable foundation for our development efforts beyond 2015’.

The report shows but does not say that the targets that have not been met will not be met. The poverty target and access-to-clean-water target are in the bank (also the unambitious slum-dweller target). But the other targets, including those relating to hunger, gender parity at all levels of education, universal primary education, maternal mortality, child survival, communicable diseases, environmental sustainability and sanitation, now become post-2015 business.

The UN’s annual MDG progress reports are interesting but have real weaknesses. One is simply that they appear too often. Most of the development indicators they track don’t change much in a year, or else changes in them can only be discerned every few years. Some of the most striking findings in past reports have resulted from changes in methodology rather than changes in the world. For example, we learned that in the space of only two years the number of malaria deaths avoided since the year 2000 had leapt from 1.1 million to 3.3 million. And, as is now a little notorious, we also learned a couple of years ago that some 150 million less people were going hungry than previously estimated.

A second weakness of these reports is a lack of coherence and consistency, which presumably reflects their inter-agency origins. They are full of statistics that use different baseline years. They constantly yet without comment make more-than-minor revisions in their baseline data. And they present information in ways that vary quite substantially from year to year. As a consequence, it can be quite dizzying, if not mind-numbing, to read even the highlights of any one report: one is never sure exactly what represents a new development or an emerging trend, and what is the same old stuff slightly rehashed.

The 2014 report has little new to tell us about poverty, hunger, education and that messy afterthought, the eighth MDG, on the ‘global partnership for development’. We already knew that the number of people in extreme poverty had fallen to or below the 1.2 billion mark a while back (2010), and we don’t really know what it has been doing lately, though presumably its fall continues apace. We know that the number of undernourished people in developing countries, as now more carefully measured by the UN Food and Agriculture Organisation, is loitering around the 850 million mark. We know that primary school enrolment is stuck around the 90 per cent mark. It has been the case for a while that about 80 per cent of developing countries’ exports to developed countries are free of duty. And we probably didn’t need this report to remind us again that some 2.5 billion people are believed to lack access to adequate sanitation—a particularly obstinate number. We are also presumably getting familiar with the proposition that some 60 million children are still not in school, as that number has not budged appreciably for a good while.

Does the 2014 report tell us anything that is new? Well, by itself, not so much. However, if one takes the information presented in the 2012, 2013 and 2014 reports together, one can begin to discern some interesting developments that have been unfolding over the last few years, if not the last one year, while the indicators mentioned above have remained either stuck or inscrutable. Below is a crude chart in which data for the three years are piled up and trend lines (moving two-year averages) drawn for selected indicators, being a subset of those indicators for which changes are presented in percentage terms. (The motley collection of time slots along the x-axis reflects the variety of such time slots used for the various MDG indicators.) 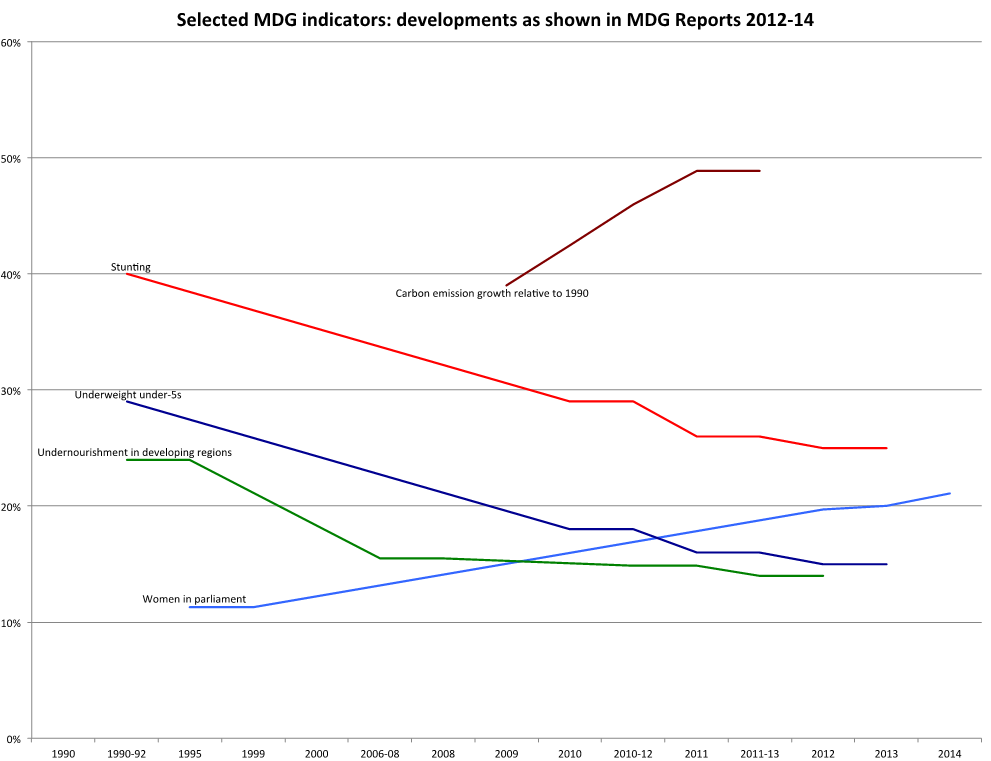 From the above chart we can see that the proportion of children under five who are under-weight has continued to decline over the last few years, and with it the proportion of children in the same age group who have actually suffered stunting, despite the relatively static incidence of undernourishment in developing regions (as represented by the green trend line). The proportion of women in parliament has grown from woeful to mediocre, but has grown quite steadily and is now only four percentage points below the proportion boasted by the developed countries, namely 25 per cent. And, less happily, global carbon emissions have grown steadily too, now standing almost 50 per cent above their 1990 level.

Further, the following composite chart, which also draws on information presented in the last three MDG reports, shows developments in several indicators for which changes are measured in specific units rather than percentages. 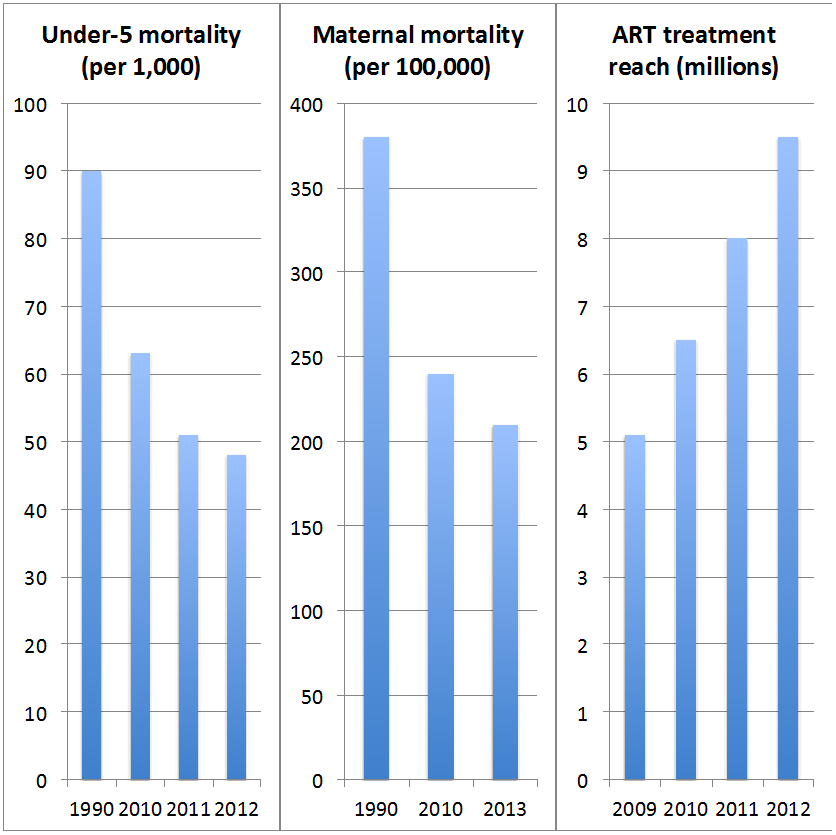 Overall, it appears that there has in fact been some notable recent progress, in the areas of children’s health (more than their education), the prevention and treatment of communicable diseases, and women’s political participation. This progress is not easy to perceive from a reading of the 2014 MDG report, and is all the easier to overlook if one is eager to move on to a post-2015 international development framework. If only the UN were more attuned to what’s been happening lately, and less keen to avoid discussing anything short of victory.