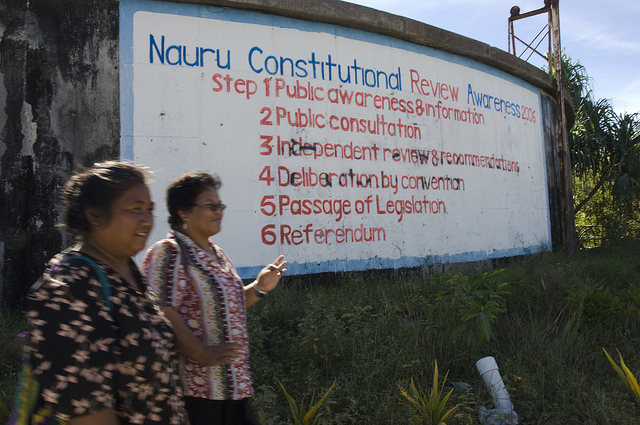 The ongoing governance crises in Nauru were noticeable by their absence from the communiqué released at the end of the meeting of Pacific Island Forum leaders in Port Moresby last month. This is certainly disappointing if not very surprising. The media covered the decision by the government of New Zealand to suspend its aid to the justice sector of Nauru. This decision was important in terms of its timing and also a significant indicator that this is one area where there is appetite to demarcate a policy difference between Wellington and Canberra. On the part of the Nauruan government, this was met with little concern and the impact in terms of operations within the justice sector appears to have been minimal. The Minister for Justice, David Adeang (who is also the Minister for Finance), has more than sufficient funds available by virtue of Australia’s regional processing centre to make up any shortfall that may arise.

From numerous conversations and exchanges I have had with sources close to what is happening on Nauru, it is clear that the rule of law and democratic governance is deteriorating. This is a matter of concern to many within the region and needs to be given appropriate attention, not only to protect the rights and freedoms of the citizens of that country but also to ensure that the region as a whole remains one where democratic government continues to be the prevailing norm.

The government of Nauru has, via its official Twitter feed (managed by the Brisbane based public relations firm Mercer PR), made much of the fact that the country has a full complement of judiciary, including a Chief Justice (Ratu Joni Madraiwiwi of Fiji) and a Resident Magistrate (Emma Garo of Solomon Islands). There is nothing to lead anyone to believe that these jurists are making decisions at the behest of the executive. However, there are certainly concerns that within the executive (and particularly on the part of Minister Adeang and the Secretary for Justice, Lionel Angimea) actions are being taken that serve to distort the processes and procedures normally associated with an observance of the rule of law. These have included manipulation of visa regulations that make it difficult for defendants and litigants to secure appropriate legal representation. More recently, Minister Adeang has advised several senior citizens of Nauru that pension payments and access to concessional travel have been withdrawn. This is as a result of a Cabinet decision, which was based on their having participated in what the government calls ‘riots’ during June of this year. None of these people have been charged with riot or any other criminal offence and they have not appeared before any court. This ‘pension’ scheme has no statutory basis and the payments are discretionary, which is what allows them to be discontinued by the Cabinet without having to worry about a legal challenge on the part of those affected.

These are some of the most recent worrying occurrences on Nauru that can be added to previous ones that have been documented here, here and here. Which leads us to the following questions:

What, if anything, can or should be done?

Who should do it?

A number of references have already been made to the application of the Biketawa Declaration in a situation such as has been unfolding for some time in Nauru. The Secretary General of the Pacific Islands Forum Secretariat, Dame Meg Taylor, has cited it in her comments and has indicated that she does not expect there to be a Forum-led intervention in Nauru but that the Secretariat stands ready to provide Nauru with any assistance in relation to governance that may be required. It is too simplistic to say that the Pacific Islands Forum Secretariat is failing in its mandate to ensure regional peace, security and governance. Whilst it is certainly true that it is the regional body with primary responsibility in this space, it remains the case that the secretariat cannot be expected to act either in isolation or without the political backing of the Forum leaders.

The current administration of Nauru continues to demonstrate an insularity and resistance to anything it perceives as an attack on its national sovereignty. This is reflected in the blocking of Twitter accounts (particularly those of international journalists) that express criticisms of the government of Nauru. Opportunities to influence decision-making are not plentiful whether on Nauru itself or outside the country. However, there are options available which merit consideration here.

The Pacific Islands Forum Secretariat needs to maintain a watching brief in relation to governance on Nauru, further to the visit to that country by the Secretary General. The issues that have been discussed here did not garner any consideration at the recent leaders meeting in Port Moresby because they did not feature in the ‘Framework for Pacific Regionalism’ processes that determined the agenda and were not raised by any of the leaders as a matter for discussion. They were, however, raised at the recent Forum Foreign Ministers’ Meeting in Sydney and it may be that this is where the continuing engagement should take place as facilitated by the Forum Secretariat.

It is generally the case that Pacific Island Forum members are reluctant to be seen to be critical of each other and this may well constrain individual leaders from seeking to influence the Nauru leadership to change course. However, as we have seen, Pacific island leaders will criticise other member countries in relation to issues about which they feel sufficiently strongly or in circumstances that they perceive will further their interests. There are some Pacific Island Forum members that could see meaningful engagement with Nauru to restore democratic governance and the rule of law as an issue that could merit deviation from the norm.

Papua New Guinea as the new chair of the Forum is well placed to make this issue one that provides more clear evidence of that country’s desire to be viewed as a regional leader. It is not necessary for PM O’Neill to go it alone in this regard; he can call on the support of the Troika (comprising the current chair, immediate past chair (Palau) and incoming chair (Federated States of Micronesia)).

Very recently, Australia has declared that it is seeking a seat on the United Nations Human Rights Council (2018-2020) with this manifesto:

Should we be elected, our focus would be on empowering women and girls, strengthening governance and democratic institutions, promoting freedom, freedom of expression, and advancing human rights for all.

Australia would be at the forefront of efforts to hold to account those responsible for human rights abuses, and to build more effective preventative and accountability measures.

The situation on Nauru provides the government of Australia with a very real opportunity to demonstrate to the global community how it is able to engage meaningfully and beneficially in a country within its sphere of influence. One where governance and democratic institutions are being undermined, where freedom of expression is denied and where there is a strong and pressing need to hold those responsible for human rights abuses to account. However, the nature of the relationship between Australia and Nauru centred on the use of the latter as a regional processing centre for asylum seekers by the former, means that Canberra is unlikely to be very active in this regard.

A similar opportunity presents itself to the government of Fiji, which is also seeking an appointment to the UN Human Rights Council (2018-2020) on a similar platform [pdf]:

Dedication to basic human rights is the foundation of democracy. No democracy can survive if the rights of each person are not sacred, if the state fails to protect – or even works to undermine – the individual’s ability to think and believe and worship as he or she chooses.

Both Australia and Fiji have very close linkages with the executive leadership of Nauru. Australia is a primary provider of finance flows to the Nauruan government (including more than $600,000 in visa fees per month) and Fijian nationals occupy many important posts within the Nauruan bureaucracy. It is no doubt a matter of concern to the Fijian leadership that these public servants are susceptible to being placed under considerable pressure to act contrary to the rule of law and democratic principles faced with the knowledge that their continued employment is at the whim of the Nauruan cabinet.

Many Forum member countries, Fiji and Papua New Guinea included, have struggled and are currently struggling with governance challenges of their own. This may mean that they have limited room to move, but they are also able to approach this complex and sensitive issue from a starting point of achieving and maintaining democracy as a shared challenge.

I am the first to acknowledge that rectifying a situation such as the one that has arisen in Nauru is neither straightforward nor easily achievable. However, simply looking the other way is indefensible.