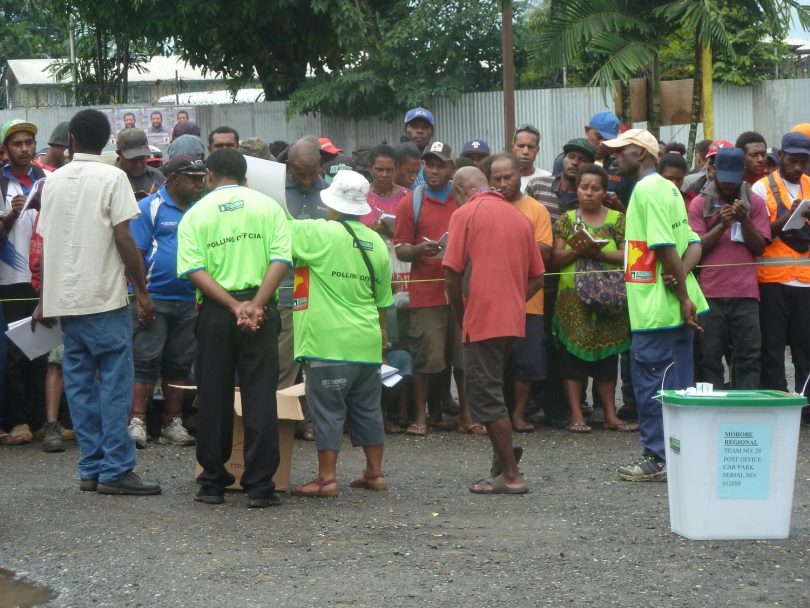 There are still reports to be written, official verdicts to be made, and electoral petitions to be heard. But media reporting alone is enough for the most important point to be clear: the 2017 elections in Papua New Guinea were not good enough. There were major roll issues, there were likely cases of fraud, and electoral violence is ongoing. Voters deserve better.

The first step in making sure improvements occur is diagnosing the issues. That’s what I’m going to do in this post. I’m going to look at the structural drivers of PNG’s electoral problems. I’m not here to level accusations at individuals. If people have committed crimes they should be tried. Yet many electoral officials worked hard during the 2017 elections. And most of the country’s citizens wanted nothing more than to exercise their democratic rights. But the elections went awry regardless. And 2017 isn’t the first time PNG has had major problems with its elections. So I’m not going to get personal. Instead, I’m going to provide a social scientist’s answer to the question, ‘what’s the matter with elections in PNG?’

The central problem is political. And simple. Most of Papua New Guinea’s members of parliament don’t care how well elections are run. Because of this, no political pressure is placed on the Electoral Commission to perform. It isn’t given the resources it needs either. In 2016, it was reported that the PNG government had only budgeted half as much for the running of the 2017 elections as had been spent on the previous ones. Savings are always good, but half price elections are impossible. No government concerned about good elections would have budgeted so little.

Why aren’t most politicians in PNG concerned about electoral quality? The answer lies in the voter-politician relationship. In Papua New Guinea, most voters vote for the candidate who they think is most likely to help them, their family, or their community. They don’t vote on the basis of national issues. Voting this way isn’t unique to PNG. It happens all over the developing world. You can find it in the recent histories of many OECD countries too. PNG’s voters aren’t doing anything wrong when they vote in search of localised or personalised assistance. Most have acute and immediate needs. And most have never seen those needs met by national policy. Under these circumstances, voting in search of direct assistance is perfectly reasonable. It’s what I would do.

Unfortunately, however, because candidates want to be elected, and MPs re-elected, voting for personal or local benefits has a harmful side-effect. It causes MPs to focus on channelling state resources directly to their supporters. They do this at the expense of national governance and national issues. Elections are a national issue. Politicians have no political reason for caring about well-run elections. They’re not going to get punished at the ballot box if they mess up. Indeed, if anything sitting MPs — as powerful political actors — are likely to benefit from poorly run elections; they’re much easier to subvert locally. And so most of PNG’s politicians proactively ignore the task of strengthening the country’s electoral infrastructure. Which is why the Electoral Commission ended up starved of resources during the same political term that the District Services Improvement Program (government money which MPs can effectively lavish on their supporters) increased substantially.

It’s true that some politicians in Papua New Guinea have, at times, worked hard to improve the country’s electoral infrastructure. And others have tried particularly hard to make it worse. PNG’s politicians have some agency and so deserve to be credited or blamed for their actions. But the broader dynamic I have described is always present; it has a broad effect on political actions and — at a national level — it is a strong force working against well-run elections.

Amidst the overarching effects of this national dynamic there is important variation. Some parts of the electoral process work better than others. And some parts of the country have better elections than others. Nothing is perfect, but counting is better than roll compilation, for example. And elections are worse in the Highlands than in other parts of the country. I’ve written about this in depth in this discussion paper. For now I want to highlight two important lessons from the variation. Generally, the best aspects of elections are the most transparent aspects. Counting is usually OK (albeit slow) because all candidates have scrutineers in counting places. This transparency makes it harder, although not impossible, to cheat. Also, elections are usually better in places where power is diffuse. In electorates where candidates can muster the power to capture polling stations, polling is — unsurprisingly — worse. But in other parts of the country it’s simply not possible for candidates to do this. When it isn’t, most candidates will have scrutineers watching polling, and brazen cheating is less likely.

Even in the best parts of the electoral process, in the best parts of the country, matters aren’t perfect. But they are good enough. Overall, PNG’s 2017 elections weren’t good enough. The question now is how to take what we know of the dynamics of the country’s electoral problems to improve elections in the future. This will be the subject of my next two posts.

This post is the first in a three part series; you can read the other two posts here and here.