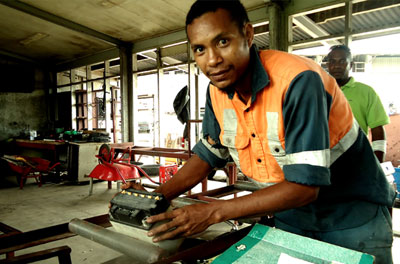 Over the past decade, the strong performance of PNG’s non-mineral economy has seen formal employment grow by an average of 6% per year. This has almost doubled the size of the private sector workforce, and created new opportunities for an emerging middle class. However, as the construction phase of the PNG-Liquefied Natural Gas (LNG) project winds down and external conditions become less favorable, growth in PNG’s non-mineral economy continues to slow. Non-mineral GDP growth [pdf] fell from 9.1% in 2012 to 5.5% in 2013 and is now expected to further decline to around 1.3% in 2014.

Overall GDP growth will receive a large boost in late 2014 and 2015 from the onset of LNG exports and other new mining operations. However, stimulating growth in the more labour intensive non-mineral sectors will be crucial in ensuring that the pace of job creation does not slow.

What needs to be done to fuel the next round of non-mineral employment growth in the PNG economy?

A business survey carried out by the Institute of National Affairs (INA) with financial assistance from the Asian Development (ADB) offers a number of insights on how PNG’s investment environment might be improved and complements similar surveys that were carried out in 2002 and 2007.

As in the previous two surveys [pdf], law and order was again identified by business as the top business constraint, with the investment decisions of 36% of respondents being either highly or very highly affected by crime. Effectively, crime imposes a large tax on businesses, especially smaller ones. Corruption was listed as the second most important constraint to business activity, with transport and electricity infrastructure ranking third and fourth, respectively. Other top constraints in descending order of importance included the availability of skilled labor, a lack of political and regulatory stability, transport and telecommunications infrastructure, inflation, high cost of goods, and land access and compensation issues.

Although there are few surprises amongst this list of business constraints for people familiar with PNG’s development challenges, the data does reveal some informative trends.

The most significant progress can be directly attributed to improvements in macroeconomic management over the last decade. Inflation, interest rates and exchange rate variability all recorded significant declines as problems for business and investment. This is a testament to the value of stable monetary and fiscal settings in fostering more inclusive economic growth, and reinforces the need to maintain that stability as the external environment now becomes less favorable.

Further, while law and order issues remain an acute constraint for business, the severity of the problem appears to have fallen – or perhaps businesses have become more adept at dealing with it. The percentage of respondents who were highly or very highly affected dropped from 59% in 2002 to 36% in 2013. Similarly, the proportion of respondents that said they were highly or very highly affected by political and regulatory uncertainty has also declined significantly since 2002.

Concerns relating to telecommunications infrastructure also showed significant improvement between 2007 and 2012. Undoubtedly, this result is closely tied to reforms in the sector during 2006 that introduced competition into the mobile telecommunications market and the resulting drop in prices and increasing coverage this facilitated. It also powerfully illustrates how the entry of the private sector into areas of the economy formally reserved for state owned enterprises can benefit the population as a whole. Nevertheless, telecommunications remains a key concern for business, suggesting the need for more reforms to increase access and reduce costs further.

On the downside, there appears to have been little or no progress in a number of key areas. Corruption is rated as a major problem for business and does not appear to have improved in the last 10 years. In 2012, 28% of businesses said their investment decisions were highly or very highly affected by corruption. Poor transport and electricity infrastructure also continues to cause severe problems for business, and these concerns appear to have increased since 2007.

Much attention has been paid to the great potential PNG has to develop its mineral sector. However, long term job creation from current and future mineral projects will be limited since these are highly capital intensive activities. Broader employment growth will depend on PNG’s ability to improve the business environment by addressing the core constraints to private sector investment. As PNG looks back on a decade of impressive job growth, the stage is now set for further reforms to foster the next wave of investments that are needed to create employment opportunities for PNG’s rapidly growing population.

The INA private sector survey is supported through ADB’s Private Sector Development Initiative, (PSDI). PSDI will be releasing an analytical summary of the survey to complement the INA’s report in December 2013.