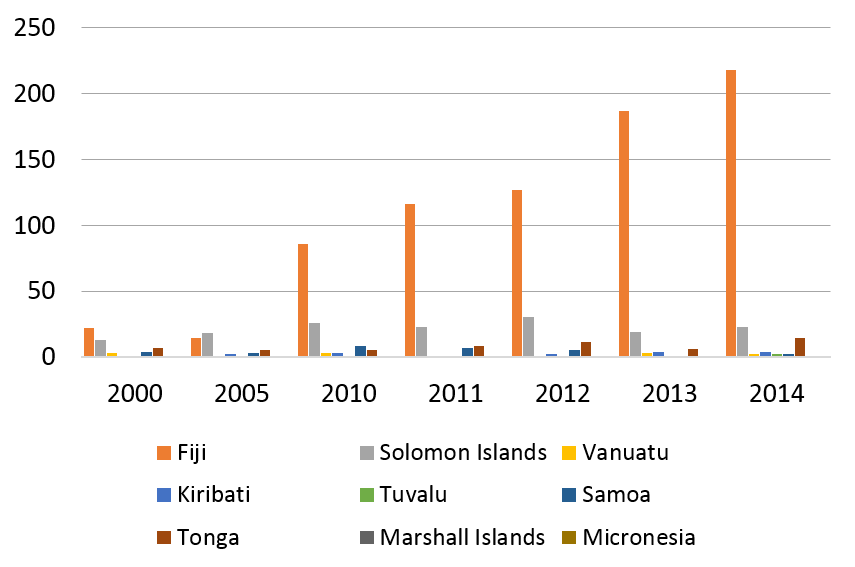 All non-citizens who seek employment in the private sector in Papua New Guinea (PNG) must possess a valid work permit, issued by the Department of Labour and Industrial Relations (DLIR). DLIR maintains a database of work permits issued per year and of active work permits. This data can be accessed to understand trends and changes in the foreign workforce employed in PNG. Interestingly, the data show that the largest economy in the Pacific islands region only attracts a small number of Pacific island workers to it. Why?

How many foreign workers in PNG are Pacific islanders?

The number of work permits issued to Pacific islanders has increased rapidly in the last ten years, from a low of 43 in 2005 to 266 in 2014 (see Figure 1). Fiji dominated the numbers in all years for which data are available, except for 2005, when the largest number of work permit holders were from Solomon Islands.

Most foreign workers in PNG are from various Asian countries, Australia and other industrialised English-speaking countries. While the numbers of workers from Pacific island countries has increased in line with the increase of foreign workers in PNG generally—as a result of the mining boom and the LNG construction phase—geographic proximity and shared membership in Pacific regional or sub-regional organisations have not resulted in any significant movement of workers into the region’s largest economy. 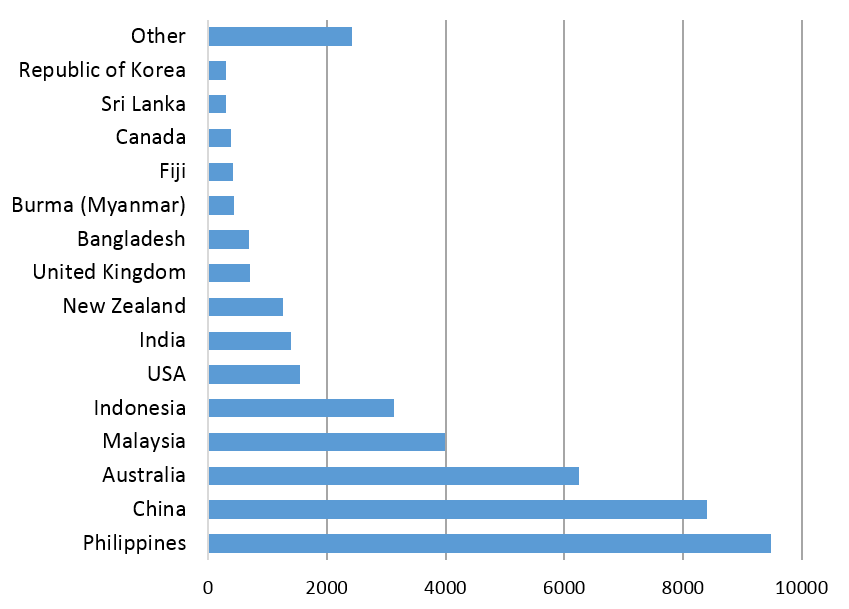 In May 2015, 511 foreign work permit holders were from Pacific island countries, which is equivalent to only 1.2 per cent of the total 41,096 active work permits held by foreign nationals. Except for Fiji, Solomon Islands and Tonga, numbers from the other Pacific source countries were less than ten permits per country (see Figure 3), and there were no workers in PNG from several Pacific island countries such as Cook Islands, Palau, Republic of Marshall Islands and Nauru.

Figure 3: Number of work permits held by Pacific islanders, May 2015 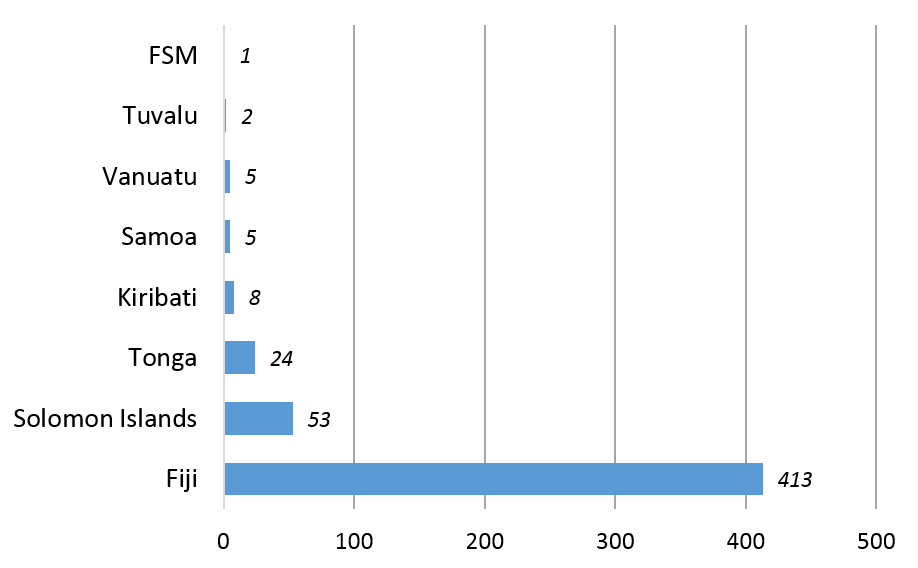 To understand the economic profile of Pacific islanders in PNG, the country’s Work Permit System provides a classification of 19 major industrial divisions. However, the industrial divisions in which work permit holders are employed have not been recorded for about half of all permit holders. For the 511 Pacific islander workers in May 2015, the industrial divisions were known for 278 workers. The largest number of these workers were employed in “Transport, Postal and Warehousing” (54), followed by “Construction and Infrastructure” (30), “Information media and telecommunications” (23), “Accommodation and Food Services” (22) and “Health Care and Social Assistance” (22).

Table 2: Ten most important occupations of Pacific islander workers in PNG, May 2015

Bilateral or regional migration schemes haven’t been effective, why?

The movement of Pacific workers into PNG has occurred on an individual basis and not under any bilateral or regional scheme. At present, the Melanesian Spearhead Group’s (MSG) Skills Movement Scheme (SMS) is the only existing sub-regional labour mobility scheme with the objective of facilitating the temporary movement of skilled MSG nationals within the region for the purpose of employment. Although procedures and administrative mechanisms have been established, and the MoU provides for the recognition of certain qualifications awarded in the MSG countries, not a single worker has moved under the SMS between any of the participating countries in the three years of its existence.

The low number of workers from Pacific islands is partly due to several challenges that they face in accessing the PNG labour market. Many big companies are foreign owned and employ workers from the countries where their headquarters are located, or they have established networks with recruitment agents in labour-sending countries, such as the Philippines. In addition, Pacific islanders are not represented in the PNG labour market to the extent that Australian and many Asian workers are, and have as such not had an opportunity to develop networks and gain a reputation as competent workers. Moreover, many Technical and Vocational Education and Training (TVET) systems in the region are not regarded as being of high quality, and consequently there seems to be a perception among employers in PNG that the workplace skills and competencies of Pacific islanders are not of the same high quality as those of workers from some other labour-source countries. The lack of a Pacific Qualifications Framework also means that qualifications are not directly comparable, and not necessarily compatible between Pacific island countries.

In addition to these implementation challenges, stakeholder consultations in PNG have revealed a sense of unease among officials in PNG about labour mobility within the region. Few PNG nationals have had the opportunity to work elsewhere in the Pacific region, including Fiji, where conditions to obtain work permits are stringent, yet a considerable number of Fijian nationals have been able to take advantage of opportunities in PNG. This has led to the perception of unbalanced flows to the disadvantage of workers from PNG. At the same time, Pacific workers face difficulties in accessing the PNG labour market. Hence, only operationalised and functioning regional mobility schemes can be expected to lead to increased numbers of Pacific workers in PNG, as well as workers from PNG in other Pacific island countries.