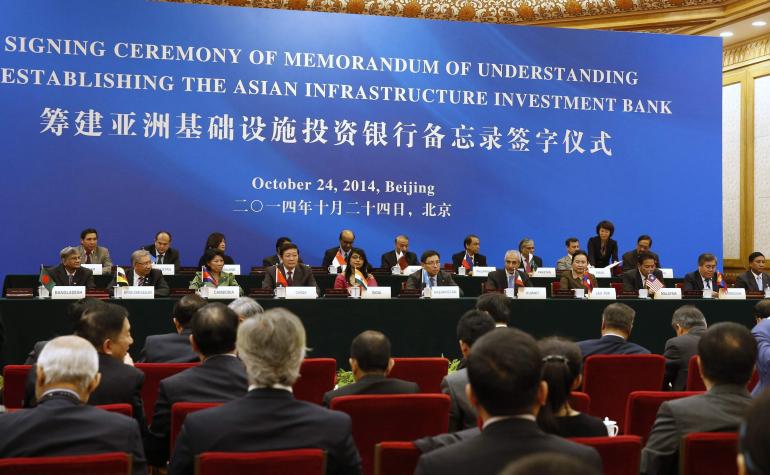 The surprising recent announcement that the United Kingdom will join the Chinese-led Asian Infrastructure Investment Bank (AIIB) has put the possibility of Australia joining the Bank back on the table [pay-wall].

Last year the Australian government initially opted to stay out of the AIIB following a concerted negative campaign by the Obama administration. But with the US’s close ally, Britain, deciding to break rank, its strategy appears in tatters.

There are good reasons for Australia to join the AIIB. Aside from Asia’s oft-mentioned infrastructure investment needs, estimated by the Asian Development Bank at about US$8 trillion from 2010-20, and the opportunity to affect better environmental and labour standards in AIIB projects, much of the reticence to join is based on a misguided view of Chinese aid.

The US and Australian governments appear to view the AIIB, as well as the recently announced BRICS Bank, as part of a strategic Chinese attempt to replace the US-led Bretton Woods institutions that have underpinned international governance in the post-World War II era.

Granted, there is more than a grain of truth in the view that the Chinese government has been frustrated with its inability to have a greater say in the governance of the International Monetary Fund and the World Bank, commensurate with its growing economic might.

Yet, if we take the existing, and fast-growing, Chinese aid program as an indication of what the AIIB might look like, it is hard to sustain the idea that it is mainly driven by strategic considerations.

The Chinese aid program’s inner workings are notoriously opaque. But what we do know suggests that it is highly fragmented and driven largely ‘from below’ by construction companies looking to drum-up business.

Although the People’s Republic of China had a foreign aid program in the Maoist era, used mainly to support rebel groups in the Third World, and aid has also been used for decades to prevent small countries from formally recognising Taiwan, more recent growth in the aid program is part of a wider drive to encourage Chinese investment abroad.

The ‘going out’ agenda of the Chinese government actually emanated in part from pressure by the large state-owned National Oil Companies, which were made to be profit-seeking but were running out of profitable opportunities in China, to invest offshore. Likewise, as the Chinese economy became saturated and profit levels declined, and with the Beijing government amassing very large foreign reserves, searching for profit internationally became imperative.

For provincial governments, promoting provincial state-owned enterprises to go offshore was no less urgent. This is because provinces have for several decades been charged with providing most key services, but without the tax revenue to sustain this.

Thus, in practice, Chinese aid projects begin, not in Beijing, but with state-owned enterprises or well-connected private companies liaising with the governments of recipient countries to identify, even propose, potential projects they could undertake. These are overwhelmingly infrastructure projects, unlike Western aid, which is also spent on governance, health and education. Recipient governments then formally request aid funding from the Chinese government. If the request is approved, the work is carried out by the initiating corporation.

Profitability on aid projects is low, at usually 1-2%, but it is hoped that more lucrative contracts will emerge once a good relationship is established between the corporation and the recipient government.

Because it is driven from below, the Chinese aid program is highly fragmented and it is practically impossible to identify any strategy behind how aid is delivered and where projects are located, as a recent Lowy Institute map of Chinese aid projects in the Pacific clearly shows.

The AIIB appears to fit within this broader picture. Its focus on infrastructure projects is certainly commensurate with the broader objectives of the Chinese government’s ‘going out’ agenda and the interests of national and provincial SOEs, as well as other Chinese companies, to find profitable projects.

For the Australian government contemplating whether to join, the fragmented Chinese aid program could be a potential problem, in that it will likely be difficult to attain coherence across the Bank’s operations, and there will be many competing interests to navigate, not just between countries, but also within China.

At the same time, a fragmented, and largely non-strategic Chinese aid program means that the opportunity for others to influence the structure and operations of the AIIB, not to mention the objectives of particular projects, is very real. It would require careful analysis of the interests for, or against, particular agendas, and the cultivation of coalitions around chosen objectives. But it would be possible, because China, despite its control of 49% of the AIIB’s shares, will not be necessarily speaking with one voice.

Joining the AIIB also does not mean undermining Australia’s alliance with the US, since, as I have argued, the Chinese aid program in its various guises is not as strategic or coherent as is often believed.

In short, there are really no good reasons for Australia to stay out of the AIIB and the sooner it joins, the greater the influence the Australian government could exert.

Shahar Hameiri is a Senior Lecturer in International Politics and Fellow of the Asia Research Centre, Murdoch University. He tweets at @ShaharHameiri.