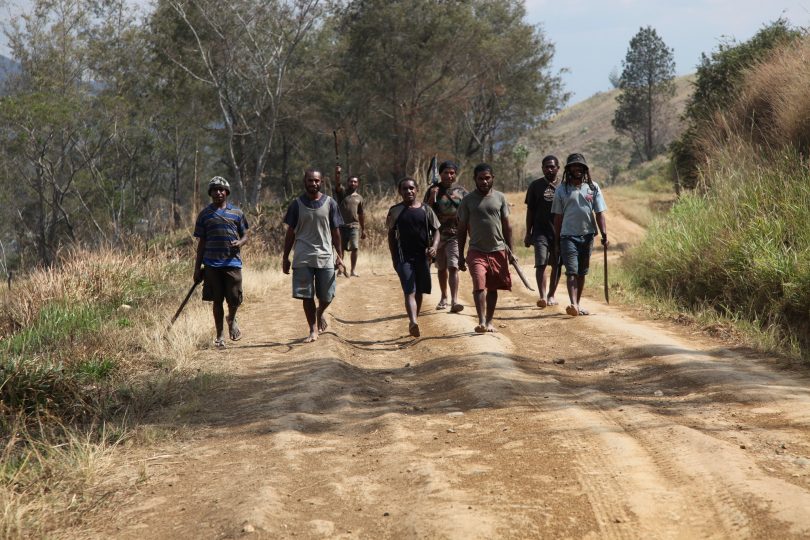 In the midst of the flurry of anxiety-driven commentary about the increasing influence of China in the Pacific and its security consequences for Australia, it is oddly refreshing to see some attention being given to what is arguably a far more pressing and immediate security challenge for many of Australia’s near Pacific neighbours: the pernicious social impacts of large-scale extractive resource industries.

Much of this recent attention – including a report by Jubilee Australia – has focused on developments in Hela Province in the PNG Highlands where the devastating February 26 earthquake has compounded the social tumult unleashed by ExxonMobil’s giant PNG Liquefied Natural Gas (LNG) project, giving rise to a downward spiral of violence, death and disorder. Throughout the commentary on the unfolding human disaster in Hela, a recurring question is being posed: could all this blow up into a protracted armed conflict akin to the Bougainville Crisis of 1989 to 1998?

This is precisely the question that forms the point of departure for the research presented in my recently published book Resource extraction and contentious states: mining and the politics of scale in the Pacific Islands.

Large-scale mining was implicated in both of these conflicts, but much more so in the case of Bougainville, where most informed commentators agree that the Crisis would not have occurred were it not for the impacts of Rio Tinto’s Panguna mine, at the time one of the world’s largest copper and gold mines.

Given that these conflicts occurred on islands, the book sets out to ask whether there is something peculiar about islands — their “islandness” as it is referred to in the burgeoning island studies literature — that makes them unusually or exceptionally potent spaces for the contentious and frequently violent politics that attend extractive enclave economies.

More specifically, the book asks whether the Bougainville conflict would ever have occurred, or occurred to the extent that it did, if Bougainville had not been a sub-national island jurisdiction (i.e. an island-province) of PNG but instead a landlocked province within “mainland” PNG, such as Hela Province, or, for that matter Enga Province, which hosts the violence-plagued Porgera gold mine operated by Canadian miner Barrick Gold and the subject of a damning Human Rights Watch report in 2011.

Of course this is not a question for which there is a definitive answer: if there is anything we have learned from the vast corpus of research on intra-state conflicts in developing country settings, it is that such conflicts are always the outcome of a complex set of social, political, historical and ecological factors operating at multiple scales. When it comes to interpreting the “causes” of developing country conflicts, we have become acutely aware of falling into the traps of determinism, narrative simplification and mono-causal interpretation.

The book does suggest, however, that it is a useful question ‘to think with’, not least because it draws attention to the inescapabilty of geography, and, in particular, to how what geographers refer to as social-spatial relations – such as territoriality and the politics of scale – matter more than ever if we are to understand the violent ructions that are being engendered by contemporary forms of globalisation and what economic geographer David Harvey has described as “accumulation by dispossession”.

By territoriality I mean strategies to enclose and control geographical space; strategies that depend, crucially, upon the communication of territorial boundaries. By the politics of scale I mean struggles over the scales at which economic and political processes occur. Through these struggles, new, sometimes previously unimaginable, scales can be produced and the relative importance of existing scales reconfigured. Notable examples include the European Union, sub-national urbanised mega-regions, and globalised financial markets that transcend national regulatory systems.

Due to their unique geographic properties – their stark boundedness – islands have long been seen as paradigmatic settings for territorialising projects, including the nation-state and sub-national jurisdictions of various types. In the words of John Gillis, they are the “most clearly marked boundaries of all”. In the book I argue that as well as having these distinctive territorial properties, islands can also be produced as a powerful scale of political and economic contestation.

In the context of large islands in the western Pacific, such as Bougainville and Guadalcanal, island-wide identities and socio-political movements were, in the first instance, a product of the introduction of capitalist social relations in the form of the colonial plantation economy. The plantation experience, buttressed by the Christian missions and the colonial delineation of sub-national administrative units that were often coterminous with islands, united the culturally and linguistically heterogeneous populations of the large Melanesian islands in ways that were previously unknown, effectively producing the island as a scale of accumulation, dispossession and resistance.

And just as Melanesian islands were socially produced during the colonial epoch of globalisation, so too have they emerged as a critical, albeit problematic, scale of struggle in contemporary contestations around globalised extractive resource capitalism; demonstrated, most spectacularly, by the advent of island-scale armed insurgencies first on Bougainville and then on Guadalcanal.

I say problematic because the island has been an ephemeral and elusive scale for collective action: it has only emerged at particular moments and conjunctures, and it competes with forces that constantly work to fracture it, not least of which in the context of Melanesian resource extraction is another relatively recently produced scale of contestation: customary landownership.

Indeed, it is the scale of customary landownership that has, in the first instance, been most productive of violence in the encounter with extractive industries as powerful individuals, invariably men, have captured economic benefits (such as rents, royalties and compensation payments) at the direct expense of other members of their landowning groups. These processes of exclusion have had salient gender and intergenerational dimensions, and, in the context of Melanesian socio-cultural norms of reciprocity and obligation, they have produced intense social disintegration and conflict.

However, ethnic or indigenous claims to resource-rich territories have also been an important and analytically distinct feature of resource-related violence in Melanesia. This appears to be especially true when the territory or scale in question also happens to be a relatively large island; or, in other words, when it is possible for the scale of ethnicity/indigeneity to be coterminous with the territorial boundaries of an island.

Which brings us back to the question of whether Hela, or for that matter, Enga, could become the next Bougainville? Setting aside (critically important) specificities of history, culture and social organisation, my analysis suggests that the distinctive geographical characteristics of islands can indeed make them exceptionally potent platforms for armed conflicts over natural resources, at least in the context of the Melanesian Pacific.

To be sure, many of the same spatial tensions are also evident around extractive projects in the PNG mainland: the social disintegration of landowning groups and benefit-sharing tensions between the local, provincial and national scales. Indeed it is worth recalling that the creation of Hela Province in 2012 was in large part driven by the desire of the 300,000 strong Huli-speakers, who had long been marginalised from the Highland’s lucrative extractive projects, to capitalise upon the advent of the LNG project, which is located squarely in Huli territory.

However, while new provinces can be created, and while their borders may even be conterminous with language and cultural boundaries, there are no ready-made geographical platforms for sub-national collective political action in these mainland areas. Put simply, territory and scale can be coproduced in islands in ways they cannot in mainland settings.

Of course only a fool would entertain ironclad predictions about social and political developments in Melanesia, but an unabashed geographical interpretation would suggest limits to the potential for localised tensions around extractive enclaves on mainland PNG to escalate into large-scale armed conflict with a distinctive ethno-nationalist or separatist character such as we witnessed in the case of Bougainville.

That said, as demonstrated in the Jubilee Australia report, the current social chaos and disorder in Hela is clearly linked, at least in part, to the PNG LNG project, once again reminding us of the socially corrosive and frequently violent character of Melanesia’s extractive economies.

Resource extraction and contentious states: mining and the politics of scale in the Pacific Islands was launched at the University of the South Pacific on Thursday 24 May and will be launched at ANU in late July. The research reported in the book was funded by the Australian Research Council.