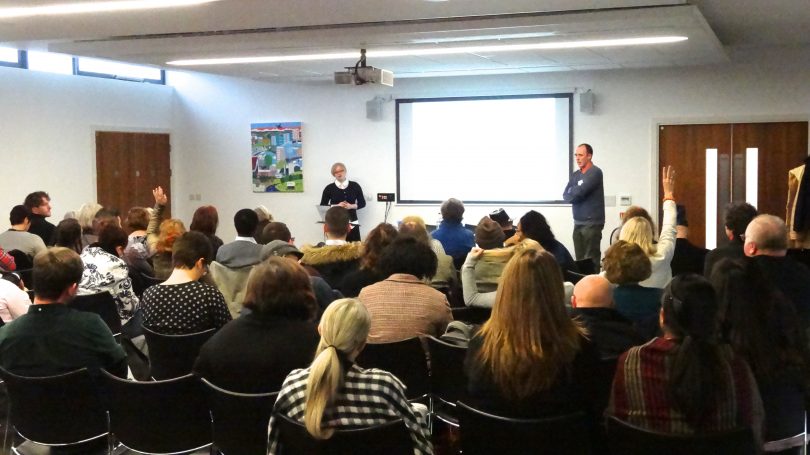 A panel at the Lancaster conference (Credit: Philip Gibbs)

The international conference Witchcraft and Human Rights: Past, Present, Future Perspectives, held at Lancaster University on 10-11 January 2019, brought together academics, practitioners and activists from around the world to present on various aspects of sorcery and witchcraft accusations and related efforts to curb accusations and other harmful practices. The conference was a follow up to the UN Experts Workshop on Witchcraft and Human rights on September 2017 in Geneva. This blog post will share some of the key learnings from the conference and relate them to the PNG context.

Transcultural and historical aspects of the phenomena of witchcraft and sorcery were an area of focus of the conference, with examples presented from India, England and the Pacific. Prof Ron Hutton’s keynote gave an overview of the end of European witchcraft trials, with links to the global contemporary context. He identified a number of exceptional factors about the European witch-trials, including the fact that it was the only area of the world to link witchcraft to a fully formed religion (Christianity); and the only one (so far) where an official belief in witchcraft was transformed into an equally vehement disbelief. The trials declined, Prof Hutton said, for a number of reasons: the standards of proof of witchcraft were increased; strong states and good legal systems were built; and witch-hunting experience led societies to realise that it did not produce the expected results (i.e. less sickness, death, misfortune in the community). In addition, official disbelief in witchcraft was manifested through legislation (repeal of the crime of witchcraft), official action taken against those engaged in witch-hunting, and negative environmental factors that had possibly prompted the witch-hunts in the first place – such as the “little ice age” (that had caused a reduction in agricultural output) and the Bubonic plague – ceased.

The gendered nature of witchcraft accusations was a focus of the conference. Amit Anand and Preethi Lolaksha Nagavani of Lancaster University discussed official data from India showing that 2,000 persons, mainly women, were accused of practicing witchcraft between 2001 and 2004. Many marginalised women are targeted, and other wider causal factors –such as infertility and mental health issues – contribute to women being accused.

Oxford University’s Naomi Richman presented on the gendering of evil in Nigerian Christian discourse. Using ethnographic data from research with a deliverance church in Nigeria and within diasporic communities in the UK and US, Richman showed the gendered nature of female witchcraft accusation through male insecurity, motherhood and sexuality. Richman stressed the importance of engaging in respectful dialogue around witchcraft accusation. This is relevant to the conversations needed in Papua New Guinea (PNG). While research shows that witchcraft accusation is not always targeted towards women, the role of Christianity and the gendering of accusations in some provinces of PNG requires conversations that engage in respectful dialogue that challenges narratives around women as witches.

Children as victims and survivors of harmful practices relating to sorcery and witchcraft beliefs is an area of growing concern. This was evident in presentations by Stop Witchcraft Accusation UK and other charities working to address accusation and harm of children. In the United Kingdom, the Female Genital Mutilation Centre raised concerns about the importance of considering the safety of siblings of children who have been accused or harmed because of beliefs. In these contexts, the education system plays an important role in identifying children at risk. There are various efforts to address this growing aspect of sorcery and witchcraft through referrals via the education system in places like the UK, where children have been referred for breast flattening, female genital mutilation, and exorcism due to beliefs of being possessed. The role of families and community leaders in addressing child witchcraft cases was stressed, particularly in terms of a response that does not put the child in further danger. In PNG, sorcery accusations against children are becoming more common, and a targeted response, taking into consideration the recently passed Lukautim Pikininni Act, is required to ensure protection of some of the most vulnerable members of the population.

A number of presenters shared examples of best practice programming to deal with sorcery accusation. Bob Priest and Carolyn Ghent outlined their theologically-based approach, which is being implemented in Togo, the Congo and Tanzania. Their program is based on the understanding that whilst churches have been part of the problem of accusations and stigmatisation, they are also a key part of the solution. Churches are uniquely placed to cascade new teachings into community, as they have legitimacy and moral authority. One year on, they have found that participants have been passing on the training to others in their community and generating positive stories of change. In PNG the involvement of the churches in addressing sorcery accusation-related violence (SARV) has been highlighted by the Constitutional Law Reform Committee, who are developing a strategy for all churches to address the issue, due to be launched in the first half of 2019.

The use of theatre to engage with students and create awareness about albinism in Tanzania is also an example of the use of creative methods for awareness. Creative methods of engaging in awareness through theatre and film are important tools to engage with a wider audience, especially children and those who are illiterate. Examples of this in PNG can be found through the work of Tribal Foundation, Philip Gibbs and Maria Sagrista, Anton Lutz, Llane Munau, Jackie Kauli and Verena Thomas. The presentations stressed the need for intensive evaluation of the efficacy of such programs in leading to actual behavior change and/or sustained attitudinal change. Some presenters also stressed the importance of personal experience in individuals coming to accept that witchcraft is not the cause of illness, e.g. when people were given epilepsy medicine, members of the community saw that they stopped having fits, and this physical observable change led to increased skepticism about claims that epilepsy is caused by witchcraft. In PNG it is also important for health workers to explicitly link medicine with preventing disease, particularly in instances where the effects are highly visible, in order to counter explanations based on sorcery and “poisen”.

Many presenters highlighted the problematic role of witchdoctors, shamans and some church leaders as instigators of violence and other harmful practices. This is also highly relevant for PNG, where diviners known as “glasman” and some church members who see visions are often involved in generating accusations and violence.

At a broader political level, the conference also engaged in discussion on leveraging support from the United Nations for wider recognition of the problem of harmful practices as a result of sorcery accusation and witchcraft beliefs. The intention is to work towards a special resolution in 2019 or 2020 that would enable channeling international attention on the issue. It would be part of the development of an informed route forward for states grappling with these issues and seeking ways to address them.

There was some consensus at the conference around the adoption of the term “harmful practices associated with manifestations of the belief in witchcraft.” The considerations for developing this phrase were that it focuses on the harmful practices generated by beliefs in witchcraft, rather than the belief in witchcraft per se, and does not imply the reality of witchcraft as do expressions such as “sorcery or witchcraft related violence”. It was suggested that “magic” may be a better term than “witchcraft.” However, others noted that magic is not a term used in the Global South and that “witchcraft” already has a certain currency within the UN system and so it should be retained but widely defined.

United Nations Independent Expert on Albinism, Ikponwesa Ero, presented a keynote suggesting the use of human rights as the foundation for the way forward in addressing harmful practices due to belief. She spoke of the importance of separating belief from manifestation and suggested that regional approaches are a good first step in gaining support for the issue, sharing an example from her work with the African Parliament.

While the belief in witchcraft and magic is prevalent in different countries in the Pacific, the violence stemming from sorcery and witchcraft accusation is most prominent in Papua New Guinea. For a regional approach in the Pacific, careful consideration of existing regional bodies would be needed to lobby for support. Furthermore, more thought should be given in terms of the level of support a regional body would be able to provide to advance the agenda, given that the issue has been most prominent in only one Pacific country – although cases have also been reported in Vanuatu in recent years. It is also necessary to consider the potential negative consequences of framing the response in terms of human rights, particularly seeking to avoid the danger that this will lead to a standardised response. The evidence is clear that this issue requires, above all, attention to local knowledge and the local context.

This conference differed from the earlier Geneva conference in that there was significantly more consensus around the different manifestations of harm around the world linked to beliefs in witchcraft. It also recognised that these harmful practices are very often not driven by continuation of old traditions, but are dynamic phenomena responsive to time, place and power dynamics. Importantly, there was agreement at the Lancaster conference that it is appropriate to work on addressing the harmful practices/violence rather than focusing on the underlying beliefs, and acceptance that people’s cosmological beliefs or worldview must be respected in any agenda moving forward.