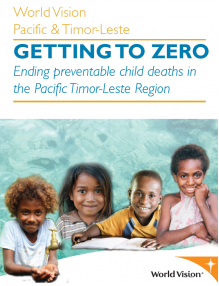 Many countries in the Pacific are stalling in the achievement of Millennium Development Goals (MDG) 4 and 5 relating to child and maternal mortality respectively. The maternal, newborn and child health (MNCH) situation in the region is dire. Most Pacific countries have under-five mortality rates much higher than the East Asia and Pacific regional average, and the situation is even worse for women and children made more vulnerable through remote location, low levels of education and high levels of poverty.

Earlier this month World Vision Pacific Timor-Leste released a report outlining the scale of the health challenge faced by many Pacific countries, the health impact of the factors of vulnerability outlined above, and presenting some practical, cost-effective recommendations.

The report, ‘Getting to Zero: Ending preventable child deaths in the Pacific Timor-Leste Region’, profiles four Pacific countries – Papua New Guinea, Solomon Islands, Timor-Leste and Vanuatu – and provides recommendations for how to ‘get to zero’ preventable child deaths in the region. While the report focuses on both maternal and child health, this blog post will only cover the findings related to child health.

The table below provides a statistical portrait of the maternal, newborn and child health situation in the Pacific: 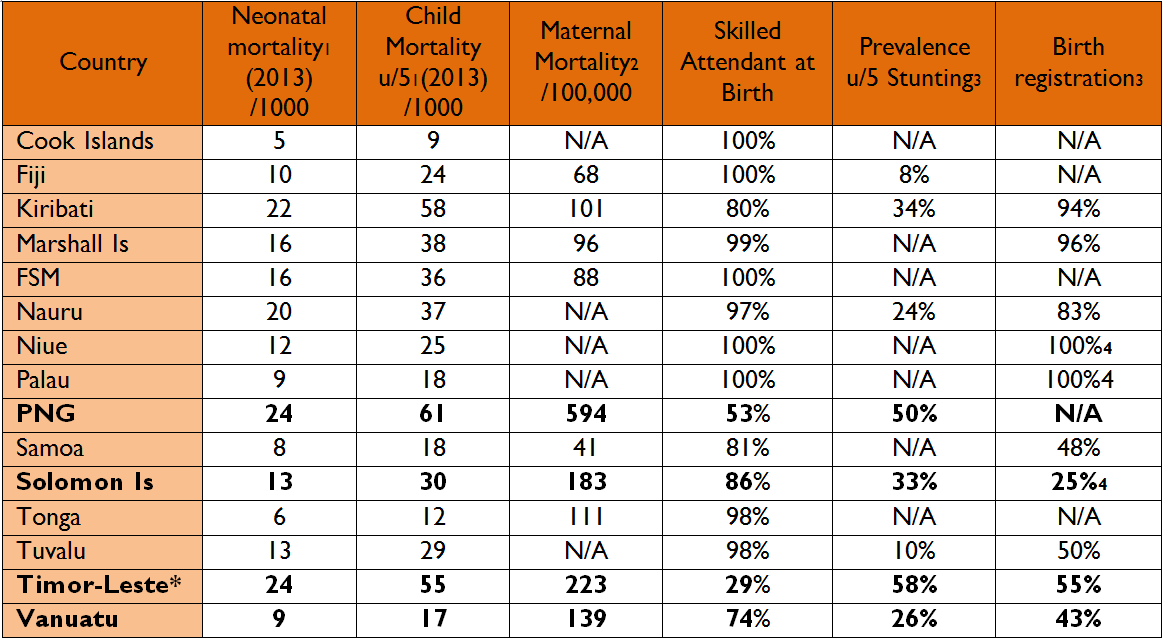 These statistics paint a sobering picture. However, it’s one that can fly under the radar due to global reporting conventions that group together East Asia and the Pacific and effectively “average out” statistics across the two regions. For example, in a 2014 UNICEF report [pdf], East Asia and the Pacific was recorded as having 19 deaths per 1,000 live births: PNG alone, however, has an under-five mortality rate of 61 deaths per 1,000 live births.

A key contributing factor to Pacific child mortality is under-nutrition, with stunting (evidence of chronic malnutrition) at crisis levels in some Pacific countries. World Vision PNG, for example, has observed that malnutrition contributes up to 50% of all paediatric hospital admissions in Port Moresby. This is deeply concerning as under-nutrition is an underlying cause of 45% of preventable child deaths. Further, stunted children have compromised cognitive development and physical capabilities, making them less productive workers of the future than they may otherwise have been.

A major factor contributing to child and maternal vulnerability is simple geography. Pacific countries face enormous challenges in providing essential services across complex geographical terrain and, consequently, struggle to reach mothers and children in remote mountainous and island environments. For example, maternal mortality in Choiseul, one of the more remote regions of the Solomon Islands, is two times higher than the national average,[1]  demonstrating that women and children suffer when geographical challenges prevent lifesaving care from being available at the critical moment of childbirth.

As the report outlines, however, there are other factors beyond the Pacific’s challenging terrain influencing how some mothers and children will fare compared with others, such as wealth quintile and maternal level of education. One example from the report is that only 10% of the poorest quintile of women in Timor-Leste have a skilled birth attendant present at delivery, whereas the wealthiest quintile are almost seven times more likely to receive a skilled birth attendant, with the improved prospects for maternal and newborn survival that this brings.

A lack of information on who and where these most vulnerable children are is compounding obstacles to effectively tackling child mortality. As The Lancet noted in 2007, weakness in recording vital statistics, like birth and death registration, means that there is no authoritative evidence to demonstrate that existing health programming for mothers and children is making a positive impact on reducing child and maternal mortality.

The Getting to Zero report responds to these challenges with four main recommendations for national governments and one key recommendation for the Pacific’s regional body – the Pacific Island Forum:

Much evidence demonstrates that simple low-cost and evidence-based interventions, such as those that can be delivered by trained Village Health Volunteers, can significantly reduce preventable child and maternal deaths by bringing basic health closer to home. While some Pacific countries, such as PNG and Vanuatu, currently have such a community-based care system, it is often under-resourced and not operating to full potential. Some countries, such as Solomon Islands, have yet to introduce this effective and cost-efficient system.

As such, all Pacific countries should establish and adequately fund, with donor support where needed, a community care package with Village Health Volunteers, as well as adequately resourcing aid posts and health clinics.

Several Pacific countries such as PNG, Timor-Leste and Vanuatu have drafted nutrition strategies, however, these are often under-resourced and not able to push for the rapid progress required to save children’s lives. As well as fully implementing and resourcing nutrition plans, all countries should ensure plans include strong monitoring frameworks with input from civil society and other stakeholders. Furthermore, donor countries should consider making long-term financing commitments to meet any financing gaps.

3. Allocate at least 15% of national budgets to maternal, newborn and child health

In 2001 the African Union agreed to set a target that health expenditure should be at least 15% of national budget in all member states and this has since become a defacto benchmark for developing countries. Many Pacific governments spend significantly below 15%. For example, Timor-Leste currently allocates just 4–5% of the national budget to health. It is vital that an appropriate amount of national funds be earmarked for health, and particularly the maternal and child health services outlined above.

Donor countries such as Australia and New Zealand have a role to play by prioritising maternal and child health in their financial support.

4. Ensure all children are counted

Levels of birth registration across the Pacific Island Forum countries are low. Just 50% of births in Timor-Leste and Vanuatu are registered, while in PNG these statistics are not known and rates are estimated to be as low as 1-10%. Failing to capture this and other vital statistics has significant implications for the planning, resourcing and delivery of health services.

As such, Pacific countries should partner with the Pacific Vital Statistics Action Plan to develop and implement national improvement plans for Civil Registration and Vital Statistics. Australia and other donor countries could make a difference by making financing and technical commitments to meet resourcing gaps in implementing these plans.

At the regional level the report recommends that the Pacific Island Forum commission a Maternal, Newborn and Child Health Roadmap, similar to that developed for Non-Communicable Diseases last year, in order to facilitate the updating and operationalisation of existing MNCH policies in a way that builds on lessons from peer countries, latest best practice and is also cost-effective and fosters regional collaboration.

Action on maternal, newborn and child health is urgently needed: a woman in the Pacific is three times more likely than a woman in South East Asia to die in childbirth and tens of thousands of Pacific children are failing to reach their 5th birthdays. This is a regional crisis demanding coordinated action at sub-national, national and regional levels.

Fortunately, many effective interventions are already available and ready to be implemented. What is needed now is for national governments, donor countries – including Australia – and regional institutions to work as part of a Pacific-wide effort and take the necessary steps to end the preventable deaths of women, newborns and children. Without kids who survive and thrive, the future of the Pacific is at stake and with it, our collective regional future. Let’s get to zero.

World Vision has been working in the Pacific Timor-Leste region for more than 40 years operating in Papua New Guinea, Solomon Islands, Vanuatu and Timor-Leste. As a child-focused agency, we work with children, their families and their communities to achieve our vision of life in all its fullness for children.