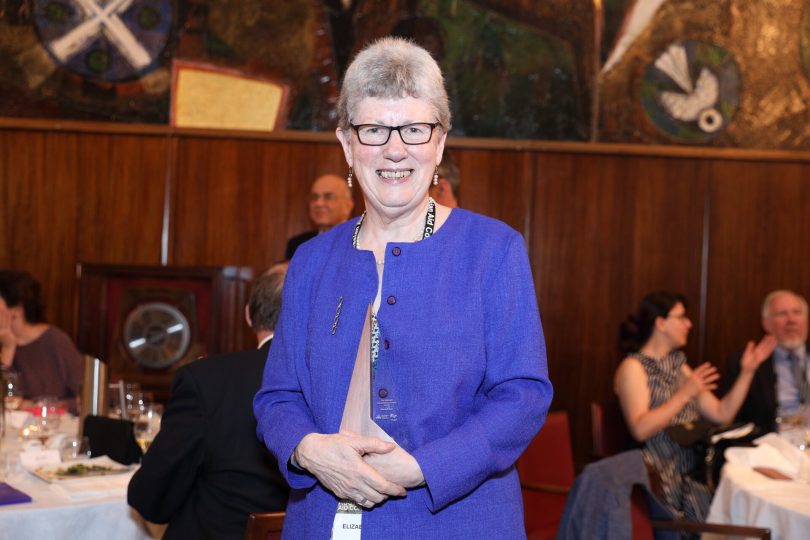 The 2019 Mitchell Humanitarian Award was awarded to Elizabeth Reid in a ceremony at The Australian National University on Tuesday night (19 February), recognising her career contributions to women’s empowerment and HIV/AIDS globally.

A trailblazing feminist whose incredible contributions have spanned academia, politics, and development practice, Elizabeth Reid has made significant impacts in relation to a number of causes, most notably in the women’s movement and the fight against HIV/AIDS.

After serving as Gough Whitlam’s Advisor on Women’s Affairs, the first role of its kind in the world, Elizabeth went on to advocate for women’s issues on the global stage. She established the Asia and Pacific Centre for Women and Development (APCWD) in Tehran with Princess Ashraf Pahlavi of Iran, and served in a number of roles with the United Nations. A personal tragedy led her to turn her focus to the prevention of HIV/AIDS, with a special focus on Papua New Guinea.

“It is a great honour to be a recipient of this award,” Elizabeth said.

“It is a fairly recent innovation but its awardees have made outstanding contributions to women’s well-being and economic security:  Robyn Alders – anyone who has been in a village in Africa, Asia or the Pacific will understand the importance of her work on Newcastle disease and also avian flu; and the Fijian Women’s Crisis Centre whose work on domestic violence and empowerment has touched the lives of countless women, and men, throughout the Pacific.”

The Mitchell Humanitarian Award is named after Mr Harold Mitchell AC, a leading Australian businessperson and international philanthropist, and is awarded by the Development Policy Centre at The Australian National University. The Award is given annually to recognise a contribution to the cause of international development which inspires others, which is of lasting and significant value, which has a link to Australia, and which has not yet been adequately recognized.

Others shortlisted for the award this year include: Adelaide-based Kylie Mines and Motivation Australia, for their work in supporting disability inclusion and services in the Pacific; and Sanasa, a Sri Lankan network of more than 8,000 village cooperatives that provides financial and other services to rural farmers, and received critical support from Oxfam Australia in its formative years.

Elizabeth Reid was presented with the Mitchell Humanitarian Award trophy and prize at the 2019 Australasian Aid Conference dinner on 19 February. She is contributing her $10,000 prize to support the work of the Sisters of Notre Dame at Banz in providing community education and support to families living with HIV/AIDS in Papua New Guinea.

Read Elizabeth’s profile and those of the other finalists on the Devpolicy Aid Profiles.