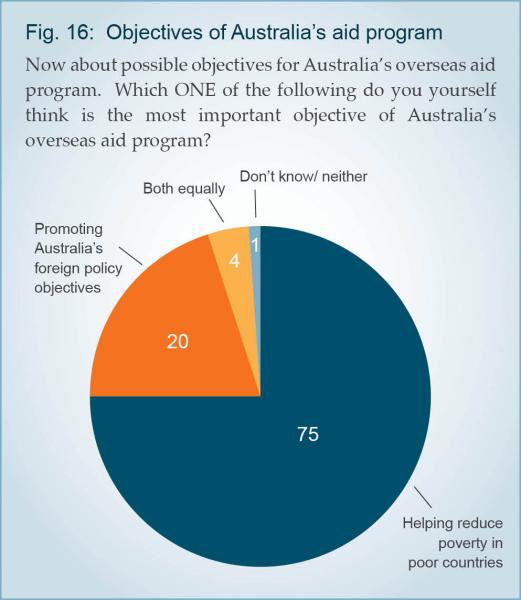 The Lowy Institute 2014 Poll released today shows that the overwhelming majority of Australians believe poverty reduction is the most important objective for the aid program.

The poll also reveals that the aid program is seen by the public as being less important in Australia’s international engagement than the defence force, the diplomatic service and Australia’s intelligence agencies.

In light of the integration of AusAID into DFAT last year, with the goal of more closely aligning aid, trade and diplomacy and with a strengthened emphasis on Australia’s national interest in the aid program from the Coalition government, this is an interesting finding.

Unfortunately though, the wording of the question is somewhat ambiguous: if someone says that poverty reduction is the most important objective for the aid program do they mean that it is actually the objective taken most seriously by the aid program at present, or that it should be? Our 2013 stakeholder survey showed that among aid experts there is a sense that poverty reduction should receive more weight than it actually does.

Aid was also seen by poll respondents as a weaker tool for international relations than other parts of the government.

Table 29: Thinking now about the arms of the Australian government involved in international relations and how important they are. For each of these arms of the government please say if you personally think they are very important, somewhat important or not important.

The poll also looked at how Australians viewed the Indonesia relationship, including the importance of aid to Indonesia.

Table 10: [Asked if two or more issues were rated equally important in table 9 above] And which ONE of these issues do you personally think is the most important?

Once again, aid is ranked of low importance.  Despite the size of Australia’s aid to Indonesia, this is perhaps unsurprising, considering Indonesia’s growing economy and increasingly prominent role on the regional and global stage. And of course, how Indonesia manages terrorism and asylum seekers impacts us a lot more than how it manages our aid.

These results should sound a warning bell for the government though— selling aid to the Australian public in terms of national interest seems to be a shaky pitch. Unless some serious work is done to clearly explain how the aid program benefits trade, investment, security and Australia’s international relationships, the government would perhaps be better off sticking to the ‘saving lives’ or ‘reducing poverty’ messages if it is seeking to maintain or build public support for aid.