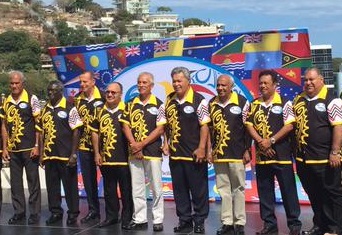 ‘Forum fortnight’ has ended with the release of the Pacific Islands Forum Leaders’ communiqué this afternoon. It has been an important fortnight for Pacific regionalism. The Forum Leaders’ meeting was preceded by the Fiji-sponsored Pacific Islands Development Forum last week, and by the first ever pre-Forum meeting of leaders from the seven Smaller Island States on Tuesday.

The 46th meeting of Pacific Island Forum Leaders was special for a number of reasons. It was the first to be held where priority issues for consideration by Leaders were identified using the new processes available under the Framework for Pacific Regionalism, which replaces the old Pacific Plan (and will be discussed in a separate blog post). This year also sees the first time in three years that an Australian prime minister has attended the PIF meeting.

Significantly, this year’s meeting was held in the lead up to the UNFCCC climate change negotiations in Paris, and in an environment of considerable frustration among island states at Australia and New Zealand’s limited action on climate change. This frustration has served to bolster Fijian calls for the two ‘big brothers’ to be excluded from future meetings (see discussion of this here, here and here). Fiji’s Prime Minister refused to attend as a result, instead sending his Foreign Minister.

But criticism of Australia and New Zealand went beyond that of Fiji. The President of Kiribati, in the lead-up to the meeting, stated bluntly:

“Those of us who feel that our interests have been compromised — should we stay in or should we walk out? … Or should we ask those that have a problem with (what is) our bottom line to dissociate themselves?”

“that a Pacific Islands Forum with Australia and New Zealand as members is hampering the ability of the Pacific island states to defend their interests, and in the case of climate policy, their very survival.”

But this was not just an important fortnight for the Pacific Islands Forum. The 3rd meeting of the Pacific Islands Development Forum (PIDF), which took as its theme ‘Building Climate Resilient Green-Blue Pacific Economies’, was described by one insider as evidence that PIDF is here to stay. Indeed, specific mention of the PIDF’s Suva Declaration on Climate Change in the Forum Leaders’ communiqué suggests that the PIDF has graduated from a potential organisation to an organisation with potential.

There are also other changes that point to PIDF’s consolidation as an organisation. A new Secretary-General was appointed. Francois Martel is a Samoan-Canadian who comes with an established background in conservation, bio-diversity and natural resource management; a profile that fits well with the avowed focus of PIDF on ‘green growth’ and the ‘blue-green economy’. The PIDF charter [pdf] was also approved.

All of these developments were eclipsed (in terms of media coverage and commentary) by the promulgation of the PIDF Suva Declaration on Climate Change [pdf]. The Declaration calls for a joint Pacific position prior to the Paris talks at the end of the year; a position that demands a global commitment to keeping warming ‘well below’ 1.5 degrees Celsius above pre-industrial levels.

These developments have helped to bolster PIDF as a regional forum, in the face of a widespread view that it is an organisation dominated by Fiji. They have also enabled Fiji’s Prime Minister to highlight again (and again) that the region’s most significant development partners – Australia and New Zealand – are not only not on the same page when it comes to climate change, they are in fact singing from a different songbook altogether. This was expressed in characteristically blunt language back in May:

“Rather than side with us, Australia in particular is siding with what I call the coalition of the selfish, those industrialised nations which are putting the welfare of their carbon-polluting industries and their workers before our welfare and survival as Pacific islanders.”

Of the five priorities discussed by Leaders (and identified through the new processes established by the Framework for Pacific Regionalism [pdf]), two came to dominate the media coverage and commentary. Both of these issues were ones where the leaders of small island states were not necessarily looking for technical assistance or even financing from the larger metropolitan members; rather they were looking for political solidarity. They were 1) a unified position on a call for a global warming target of no more than 1.5 degrees be adopted at the Paris talks, and 2) a regional response to ongoing allegations of human rights abuses in West Papua.

The momentum generated at PIDF on climate change by virtue of the Suva Declaration was maintained at the closed session of the Smaller Island States and subsequently via some trenchant comments from President Anote Tong of Kiribati. Once again, the question of whether Australia and New Zealand’s membership of the PIF could be maintained in the absence of their commitment to ‘stand with the Pacific’ was raised. The issue of a regional response to the West Papua issue figured highly in the pre-Forum civil society dialogue, which included a breakfast with the troika (past, current and incoming Forum chairs) and was taken up forcefully by the delegation of Solomon Islands, including that government’s Special Envoy, Matthew Wale.

The PIF communiqué reflects what was evidently a long and possibly challenging day at the Leaders’ retreat, and will be a source of disappointment to many. The commitments to better regional management of fisheries resources are the strongest, reflecting what we learned about the factors that promote success to pooled service delivery (see our full paper on this here). Elsewhere, there are painful reminders of longstanding criticisms that the Forum is insufficiently action-focused and does not engender sufficient accountability on the part of Leaders or CROP agencies. One such example is the Leaders’ communiqué on ICT:

“Leaders tasked the Forum Secretariat and USP to consider the merit of a regional ICT Advisory Council. The Council should not overlap with existing mechanisms and must deliver real deliverables.”

The two most contentious issues are where the bulk of the disappointment will arise. And certainly, if we focus on the product rather than the process, there is plenty for Pacific islanders to feel underwhelmed by. The Pacific Island Forum Leaders’ Declaration on Climate Change Action was clearly a compromise, and was not as forceful as the PIDF’s Suva Declaration or the Port Moresby Declaration of Smaller Island States. It did highlight the harm to small Pacific island states associated with warming of over 1.5 degrees, but its call for action referenced the UN target of 2 degrees.

The level of commitment to progressing the cause of the people of West Papua is less inspiring, with Leaders tasking the Forum Chair (PNG) to convey their concerns about alleged human rights abuses to the government of Indonesia and to consult with them on a fact finding mission. This is far from what was hoped for by the many civil society groups throughout the region who had lobbied their leaders on this issue. Papua New Guinea’s ban on West Papuan attendance at the Forum Leader’s meeting was further evidence of its unwillingness to challenge Indonesia on the issue (the West Papuan leader, Octovanius Mote, was also ‘quietly’ asked to leave the PIDF meeting the previous week).

There are reasons to be positive. One is that the Forum Leaders’ meeting actually addressed issues such as climate change and the West Papua, issues that have long been neglected. Furthermore, the compromise arrived at in relation to climate change allows for those leaders (such as President Tong of Kiribati) who want to be more vocal and activist in the lead up to the Paris talks to be so without appearing to contradict themselves.

Importantly, the Declaration references other key agreements such as the Suva Declaration discussed above. This indicates a growing recognition and acceptance of the ‘patchwork’ of regional and sub-regional groupings that exists in the Pacific; a positive step, that reflects the reality of this diverse region. (This will be discussed in another blog post focused on the Hiri Declaration and how the new Framework for Pacific Regionalism fared at the Leaders’ meeting.)

The 46th meeting of Pacific Island Forum Leaders in Port Moresby is unlikely to be remembered as the turning point for a resurgent Pacific Islands Forum. The outcome will underwhelm many observers in the region. But there are some positives to be taken from the meeting. Forum advocates, while not celebrating, are likely to be breathing a sigh of relief. The outcome could have been worse given the division among PIF members on climate change.

[Note: This article has been amended since it first appeared in order to correct minor typographical errors]