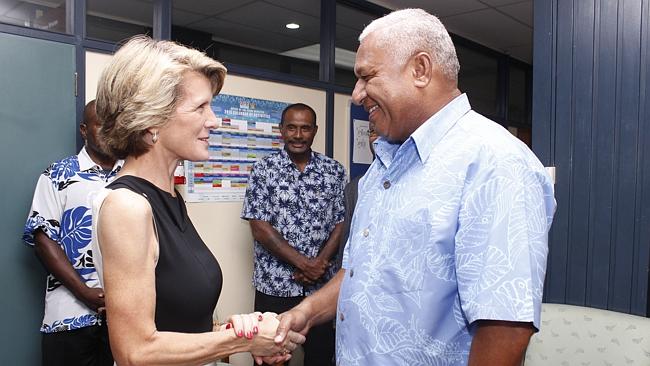 The joint announcement by Fiji and Australia that the Pacific regional architecture should be reviewed has taken both the Pacific islands region and Australian foreign affairs establishment by surprise.

We can only speculate about the origins and underlying purpose of the announced review. Very little detail has yet to be made available, save that Australia will host a meeting of regional leaders (the exact composition of that group yet to be determined) in Sydney in February 2015. But whatever the trigger for this announcement, it raises some important questions about the future of regionalism and, more particularly, the respective roles of Australia and Fiji within it.

Is there either the need or appetite for such a review, given the recent completion of a series of reviews with focus on and implications for the regional architecture?

There is much that remains unclear but what is evident is that the ‘review’ (as described in the Fiji media) or ‘discussion’ (as described on the Australian Foreign Minister’s website) has arisen amidst efforts by Australia to normalise relations with Fiji. The exchange of high commissioners has been announced, and Fiji will be offered 100 places within Australia’s Seasonal Worker Program. Fiji will also be incorporated into the New Colombo Plan, meaning that Australian students will soon study at the University of the South Pacific. Defence ties are also being re-established.

Fiji’s involvement in the regional architecture meanwhile remains unclear. Its suspension from the Pacific Islands Forum (the region’s premier political body) in 2009 was lifted recently following elections in which the former head of the Fiji military (and 2006 coup leader) won office. But Fiji has refused to rejoin the Forum, stating that it will only consider doing so if Australia and New Zealand leave the body that they helped to establish. The announced review of the regional architecture is most likely a bid by Australia to appease the Fiji Government – although it is not at all clear that Prime Minister Frank Bainimarama and Foreign Minister Ratu Inoke Kubuabola will back down from their opposition to rejoining a Forum that includes Australia and New Zealand as members.

Any review of the regional architecture, of course, brings with it opportunities. The Pacific Institute of Public Policy has welcomed the initiative as a means to “effect the necessary reforms” that will “reforge the regional vision and establish the relevant architecture to secure it”. Such a position reflects a widespread view that regionalism has done little to improve the lot of Pacific island populations (a view that to a great extent is true, although not universally so). The Australian Parliamentary Secretary for Foreign Affairs, Brett Mason, recently reiterated that point when he said about Pacific regionalism that “things can’t remain as they are.” If the review does generate a broad-based political mandate for enhancing regionalism, it would certainly be a win for all.

But we are sceptical that the review that has been announced will fulfil this purpose, for a number of reasons.

First, there is the issue of timing. In the last 10 years, there have been myriad reviews of regional organisations and plans/processes. These include the 2013 Independent Review of the Pacific Plan for Regional Integration and Cooperation (the ‘Pacific Plan); the 2012 reviews of the Secretariat of the Pacific Community (SPC) and the Pacific Islands Forum Secretariat (discussed here); the 2007 Regional Integration Framework [pdf] (RIF) review, which led to the merger of a number of major regional agencies; and the 2005 review of the regional architecture commissioned by Pacific Islands Forum Secretariat (PIFS). Surely this is overkill? The purpose of regionalism cannot primarily be to review regionalism.

Of these review activities, the most recent and most significant was the 2013 Review of the Pacific Plan, undertaken by Sir Mekere Morauta and his team and captured in a report [pdf] released less than 12 months ago. That review included detailed analysis of what the regionalism project has been and could be in the future (including work we did assessing pooled service delivery in the region). Its key product, the Framework for Pacific Regionalism [pdf], was endorsed by leaders at the Palau meeting of the Pacific Islands Forum.

The PIFS is currently implementing key activities arising from the 2013 Review of the Pacific Plan, including the rationalisation of regional meetings (a specific request from Pacific island leaders). Regional organisations such as the University of the South Pacific, SPC and the PIFS have only recently implemented recommendations from their comprehensive reviews, and in some cases, this process is ongoing. It comes as a surprise then that another review of the regional architecture should be announced.

It is unclear whether there is much appetite for another review in the region, with the implications of past reviews still being worked through and implemented by regional bodies and the Forum. Alf Simpson, former Director of the South Pacific Applied Geoscience Commission (SOPAC – now subsumed within the SPC), has said in response to the announcement that:

Time after time they keep asking the same questions hoping for a different response. Even worse the focus on the organisations only results in minor efficiency gains and the question of effectiveness is never addressed.

Transform Aqorau, the CEO of the Parties to the Nauru Agreement office, has labelled another review of the regional architecture as “ill advised, untimely and an overreaction.”

It is certainly significant that the announcement has been met with silence by most regional organisations (regional organisations, after all, would be unlikely to directly criticise the foreign ministers of Australia and Fiji). The one exception is the Secretariat of the Pacific Community, which has welcomed the initiative, although on the proviso that “the discussion comes up with some useful way forward”. Importantly, there has been no request for a review by the countries that have the greatest stake in regionalism: the smaller island states of the Pacific (a group that does not include the larger countries of Fiji and PNG, nor the developed economies of Australia and New Zealand).

This is cause for further concern. It is absurd that Australia and Fiji should bilaterally announce a review of the regional architecture with no consideration for the views of other Pacific island countries. After all, Fiji refuses to be a member of the Pacific Islands Forum, while Australia is not a member of the Melanesian Spearhead Group or the Pacific Islands Development Forum. How can either country seek to review regional arrangements to which they are not party? The meeting in February will presumably include other Pacific island heads of government, but the fact remains that the need to hold a discussion was announced by Fiji and Australia without the involvement of other leaders.

The announcement may help to re-establish the bilateral relationship between Australia and Fiji, although there is no guarantee that it will succeed in bringing Fiji back into the Forum’s fold. But it is disappointing in terms of Australia’s engagement with the broader region. Whilst in opposition, Julie Bishop promised a better engagement with the region should her party come into government. What we have seen since last October is a selective approach to developing some bilateral relationships (most notably with PNG and Fiji) and a disregard for progressing regional relationships. Australia has been noticeable by its perceived absence in key forums where issues that matter to Pacific island countries (especially the smaller states) have been discussed. The continued inertia of the PACER Plus negotiations has arisen, at least in part, from the apparent inability of Australian (and New Zealand) officials to take the concerns of Pacific negotiators on board. And the Seasonal Workers’ Program remains a source of disappointment to many.

There are plenty of challenges ahead for the future of Pacific regionalism and visionary leadership is required if they are to be successfully navigated. A review of the regional architecture, announced by two countries less than 12 months after the completion of another review, is far from visionary.

Matthew Dornan is a Research Fellow at the Development Policy Centre. Tess Newton Cain (@CainTess) is a Research Associate at the Centre.