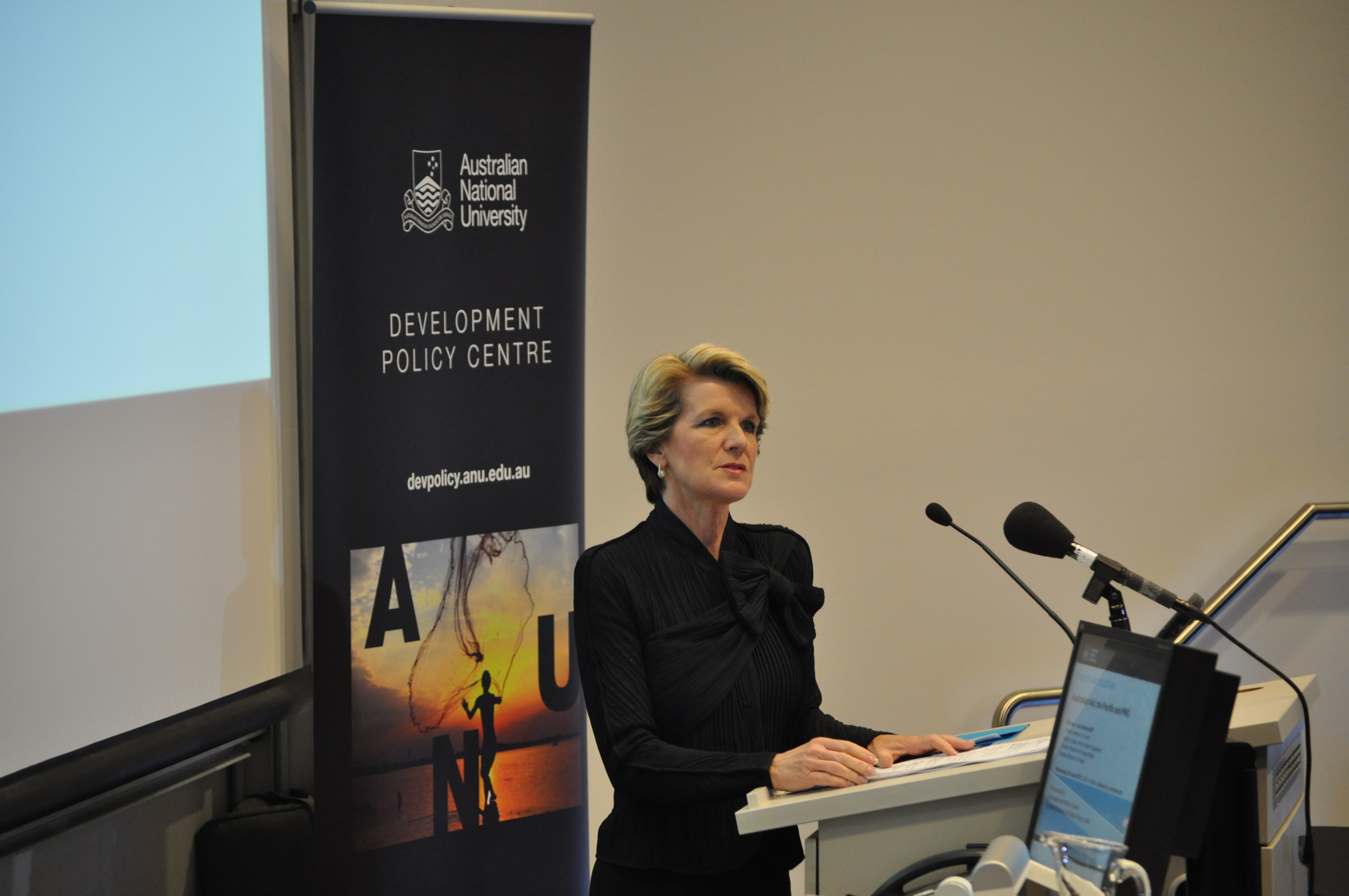 Speaking at the ANU’s Crawford School at a public lecture hosted by the Development Policy Centre, Deputy Leader of the Opposition and Shadow Minister for Foreign Affairs, Julie Bishop, painted a new vision of Australia’s relations with the Pacific, calling on Australia to “show the leadership and vision that is expected of us in the Pacific” and backing “the forging of true economic partnerships with our great friends” of the Pacific and PNG.

Highlights of her speech included an endorsement of the Pacific seasonal worker program and PACER Plus, elevation of the relationship with PNG in particular, support for relaxing visa requirements to make it easier for Papua New Guineans to visit Australia, and increased focus on aid effectiveness.

Australia and the Pacific

Noting that talk of the Asian century can easily lead to the overlooking of the Pacific, Ms Bishop argued that the Government “has taken its eyes off the region and has failed to show the necessary leadership or long-term vision that is required of it.”

“Australia needs to create a new narrative that encompasses a shared vision for the Pacific.” Aid was important, but the relationship had to go beyond aid to encompass “defence, trade, investment and diplomatic engagement throughout the region” all under a “focused and effective, practical and principled overarching strategic framework.”

In terms of concrete suggestions, Ms Bishop began with public diplomacy, calling for a better effort from Australian Network and better branding of Australian aid.

Importantly, Ms Bishop noted the benefits of labour mobility for the Pacific. She hailed the success of NZ’s Pacific seasonal worker scheme  in terms both in terms of economic welfare and the generation of goodwill. Within the context of “looking at ways we can use Australia’s domestic market to support private-sector development in the Pacific,” Ms Bishop called for “strengthening Australia’s existing guest worker program to enable greater numbers of Pacific islanders to undertake seasonal work in this country” and committed the Coalition to “examining the case for the expansion of this program.” Given the opposition of the Howard Government to a seasonal workers program, this is a significant policy shift for the Coalition.

The Deputy Opposition Leader called for “the establishment of a Pacific-wide economic and trade agreement”  and criticized the Government for not including PACER Plus (the free-trade agreement currently under negotiation) in its statement of trade policy.

Ms Bishop paid special attention to PNG, stating that she was firmly committed to “broadening, deepening and diversifying our links and to ensure that in government, our relationship with PNG will be one of the country’s highest foreign policy priorities.” She welcomed the Economic Cooperation Agreement currently under negotiation, and called for a “high-quality comprehensive trade agreement with PNG.”

She noted the massive increase in revenues flowing to the budget. As PNG resources to health and education increase, Australia should gradually shift its focus away from these key service delivery areas and towards improving the environment for business. Ms Bishop highlighted the AusAID Enterprise Challenge Fund as the sort of aid initiative consistent with a greater focus on the private sector.

Ms Bishop highlighted the Bougainville situation. A referendum on independence is due sometime bween 2015 and 2020. She noted that Bougvainville “will inevitably feature prominently in Australia’s foreign policy considerations,” and, in a clear commentary on current trends, called on the PNG government to provide the substantial financial support to Bougainville which it has promised.

On aid, the Shadow Foreign Minister covered issues relating to both aid quantity and quality. On the latter, she said that the Coalition was still committed to an aid/GNI target of 0.5%, but that “[w]ith still another Labour budget scheduled to take place in May next year, before the next election the Coalition cannot now responsibly commit to a target date. To do so would be reckless.” So “[w]e commit to the target of 0.5 per cent of GNI but we cannot now commit to the target date.” Ms Bishop indicated that “We will review the nation’s finances after Labour’s budget and commit to what we can as a nation realistically afford and what we can deliver”, suggesting that a more concrete commitment might be made after the budget but before the election.  She emphasized how much aid had increased under the Howard government, and closed her discussion about aid increases by “point[ing] to our record in terms of our commitment”.

On quality, the Deputy Opposition Leader called for “an increased focus on accountability, transparency and a reassessment of priorities within the aid program.” She welcomed the establishment of the Independent Evaluation Committee to oversee the Office of Development Effectiveness, a Howard Government Initiative. Communication of the aid program had to be about “acknowledging failures as well as celebrating successes.” “Improving the quality of independent project completion records,” an area where AusAID had a poor track record, was essential.  The Coalition would “ensure that performance benchmarks are developed and implemented,” as recommended by the Independent Review of Aid Effectiveness.

It was important that the support of the Australian public and recipient nations was retained for the aid program. “This is why the Coalition remains committed to more scrutiny of the multi-billion aid program and to higher standards of effectiveness and to performance benchmarks.”