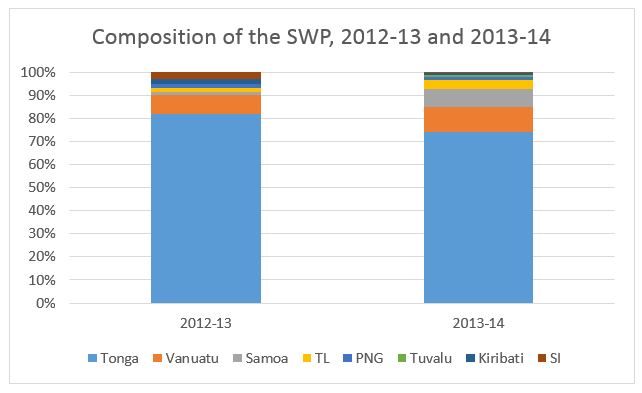 The Coalition went into the last election with only two Pacific promises in its foreign policy. One was that it would adopt a new, friendlier approach to Fiji. The other was that it would examine the case for the expansion of the Seasonal Worker Program (SWP). The SWP, which allows Pacific islanders to come to Australia for a few months every year to pick fruit and vegetables, was a good way, the Coalition said, to promote private-sector development in the Pacific and to generate goodwill.

Follow through on the first of these two promises has been swift and comprehensive. Jenny Hayward-Jones wrote of Foreign Minister Julie Bishop’s “game changer” in respect of Fiji – her meeting with the Commodore and her expression of a desire to normalise relations– in February of this year.

But what about the other promise? The Foreign Minister has spoken positively about the SWP, but not of a new approach or even a review.

Problem solved? We all live in hope, but I doubt it. High growth rates are much easier to achieve when the base is small, and the SWP is tiny. As the figure below shows, the equivalent program in New Zealand is much bigger, even though its horticultural sector is much smaller.  (And an increase in the NZ cap of 8,000, which has been holding down numbers, is now on the cards.) 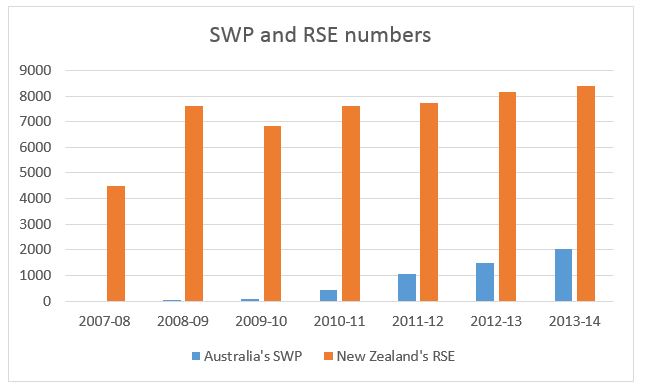 The other revealing thing about the figure above that it shows that the increase in the size of the SWP in each of the last three years has been roughly the same, some 530 a year. An increase of another 500 would be my best guess for 2014-15 – at least in the absence of any policy change. That would take the scheme’s size to just about 2,500 in FY 2014-15, still way below NZ’s numbers.

Another problem with the SWP is its composition. From its start, the scheme has been dominated by Tonga. Tonga’s share of workers fell slightly in 2013-14, but was still 74%. Good for Tonga, but, as everyone would agree, it is really Melanesia that needs labour mobility opportunities. Vanuatu almost doubled its SWP numbers to Australia last year, but its share was still only 11%. PNG and Solomon Islands went backwards and between them managed to send only 35 workers last year.

Again the NZ outcomes are very different. No one sending country dominates. Vanuatu has sent the most workers, about a third of the total. There is no easy solution to this problem with the SWP. One option is that Australia could offer to take over, and contract out, the labour selection function in any Melanesian country that wanted it to.

The SWP is a lively topic of discussion in the context of negotiations over PACER Plus, the Pacific free trade agreement with Australia and New Zealand. These latter two countries want the Pacific to sign up to PACER Plus. But the Pacific already has duty-free trade access to both Australia and NZ, and labour mobility is one of the few things that they can offer the Pacific as a signing incentive. The big two refuse to include a labour mobility chapter in PACER Plus on the grounds that it could be challenged at the WTO or by another trading partner. That doesn’t stop negotiations on the SWP going on in the background though. The Pacific Islands’ Chief Trade Negotiator, Dr Edwini Kessie, said recently that the Pacific Islands have two labour mobility demands: an increase in the SWP and RSE caps, and an extension of these schemes to other occupations.

Unfortunately, the history of the SWP suggests that neither demand is very sensible. There is no point increasing the cap if it isn’t binding. It is in New Zealand, but it never has been in Australia. This year’s total of 2,014 was below the cap of 2,500. It’s true that there were two sub-caps within this overall cap: 2,000 for horticulture and 500 for the trial sectors (accommodation, aquaculture, cotton and cane). Numbers under the second were negligible, meaning that the first cap came close to being filled, but the bottom line is that the overall cap was way above the actuals in 2013-14. Without reforms, that’s the most likely scenario in the coming years. (The cap for 2014-15 is 3,250. That’s unlikely to be reached, but the numbers in horticulture might come close to the horticultural sub-cap of 2,600.)

On the second demand, there is no point extending the scheme to other sectors if the extension is not well designed. That is surely a lesson to be learnt from the extension to non-horticultural sectors. Extension of the SWP to another four sectors sounded like a big deal, but it has fallen almost completely flat, for reasons we document here.

What are the meaningful reforms that the Pacific islands should be pushing for? As we’ve shown through our survey work, the incentive given by the Australian Government to backpackers to pick fruit (they can get a second year’s visa if they do three months of it) directly undermines the SWP. Getting rid of this incentive (which was put in place when the Coalition was not willing to consider a SWP) is the best thing that could happen to the program. But there are other things that could be changed as well, various ways in which the SWP could be made less risky and costly: we listed them here, almost a year ago exactly. And there are numerous other sensible things that the Australian Government could do to promote labour mobility beyond the SWP, such as introducing a Pacific Access Quota, as the World Bank has argued for.

But what the appetite for reform is on the Australian side remains unclear. Speaking at the Gold Coast conference, departmental officials indicated that a review of the SWP is in fact underway. I hope this leads to something significant, so that, when it comes to the Pacific, the Coalition foreign policy can claim two game changers, not one.