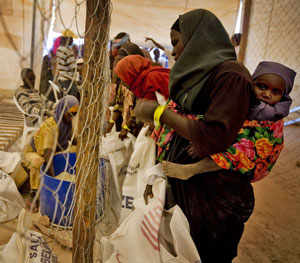 In launching the Aid Review and the Government’s response the Foreign Minister acknowledged the interdependence of the five new strategic goals of saving lives, opportunities for all, sustainable economic development, effective governance and humanitarian response.  However he highlighted that the first goal – saving lives – was first amongst equals in these objectives.  He said:

There is a developmental continuum in this overall strategic approach to the aid program. Unless the program begins by saving lives, for examples for children under five, then there is little else that can be done. Assuming therefore that lives have been saved, the task therefore is to provide opportunities for all – both in education, in employment, and the opportunities to develop self-reliance.

While the Aid Review provides effective guidance for a number of aspects of aid design and management it is now up to the Government in its new four year plan to ensure that the aid program saves as many lives as possible.

This cannot be simply resolved by saying that sectoral priority setting should be determined by country needs.  Despite the impact at times of sectorally focused new policy proposals, AusAID has always been structured around country  development and driven by country needs.  Despite this, global aid funding and Australian funding for health continues to fall well short of estimated requirements. This is possibly due to a combination of factors: decision making by (largely male) elites in developing countries and Australia that does not give a high priority to the health and survival of poor people; a narrow economic definition of development progress; a drive to try to generate economic development; and a failure to focus on those interventions that have been proven to be the most cost effective.

The result is that 1.3 million children  and 65,000 mothers died in our region in 2009 (3.0 million and 128,000 respectively if we include India). This is despite the fact that  we know how to save lives, and that health aid is amongst the most cost effective of aid interventions.

World Vision, based on extensive work by WHO, estimates that global aid for health is only around half the level required and that Australia’s health aid is currently a bit more than half of our fair share.  Recent budget forward estimates indicated that aid to health was planned to fall further as a share of total Australian aid. Unfortunately, little in the Aid Review (despite positive recommendations to increase funding for the Global Fund and for medical research) and in the Government’s response so far does anything to change this.

Some have criticised the idea of sectoral targets for areas such as health, however the lack of transparency of the Australian aid program has meant that aid campaigners have had to use a broad brush to highlight the path to improvement in Australian aid.  Aid campaigners have never argued that a fixed sectoral distribution of funds should be allocated to each country.  They have only proposed an approximate distribution by sector to help guide the program overall and to ensure that Australia is contributing fairly to the global need and effectively leveraging the support of other donors.

So how should the Australian aid program move forward at this point to ensure that Australia can save as many lives as possible?  One approach would be to formalise the Foreign Minister’s model of the developmental continuum.  In developing each country strategy the first consideration would be providing resources to save lives given the needs in the country, domestic resources and the contributions from other donors.  Only after the resource needs in this area are adequately resolved would the planning then move on to providing opportunities for all, and then on to other strategic goals.  In some countries that would require significant spending, in others little or none on health. The same model could be used in helping to determine Australia’s level of support for each multilateral.  Our fair share of global health aid requirements would suggest that about 20% of Australia’s total aid would need to go to health (or around $1000m this year based on Australia’s 2.5% portion of total OECD DAC income and a global requirement of around $38 bn) and that health funding would therefore not preclude effective coverage of the other strategic goals.

This approach to put health first should not seem unfamiliar to us as it is pretty well what we do in emergency programs and also in government in developed countries like Australia.   Matters of survival rightly come first.

Such an approach would help to maximise value for money, ensure an aid program in which we can feel proud and would be likely to gain greatest support from the public.

Without an effective strategy to ensure adequate resources go to health many more people will die unnecessarily.

Garth Luke is a Senior Researcher for World Vision Australia.